Too Old for Little League 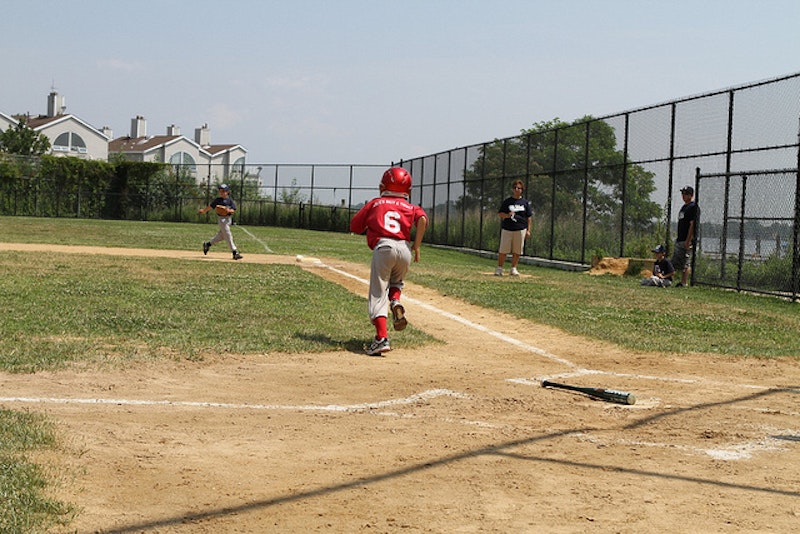 I don’t remember if Royce was my first kiss or if it was his cousin, Justin. Actually, I don’t remember if they were cousins at all or best friends or maybe just neighbors. I am sure that the three of us played on the same Little League team, McDonald’s, in fourth grade. Every time we won, we ate fast food for free, streaming out of minivans after the game, running to the counter in our dirty uniforms, hungry, and winners. I always got a Crispy Chicken Sandwich and put French fries and ketchup on it, with French fries and ketchup on the side. We won a lot, though not as much as our rival, Burger King. I hated Burger King, though I preferred Chicken Tenders to Chicken Nuggets and sometimes wished I were the worst player on their team instead of the worst player on our team. What I also remember besides being the only girl on McDonald’s and once catching a fly ball in right field, which would not have been a big deal except that I never caught anything, is that I was 10 or 12 years old when we kissed behind the dugout or maybe on the bleachers.

I definitely remember that I felt less pleasure than I did shame, afraid that once I had kissed a boy, I was no longer a child. I didn’t cry after we kissed, but I cried on my 13th birthday because I wasn’t ready to grow up. Teenagers got their periods and yelled at their parents and I wanted my dad to read Julie of the Wolves before bed—just me, not my sister or my brother, both of whom were excited about drivers’ licenses and sneaking out at night. We all grew up though, my siblings and me, the whole family and the whole team. We quit baseball, stopped winning games and racing from our moms’ minivans into McDonald’s, baseball gloves hanging from our arms.

We went to middle school and high school and college. Or, at least, I did. I don’t what my first kiss did. I’m sure he finished high school, because that’s just what we did, but I can’t confirm if we graduated together because all I remember about graduation is that one boy tripped over an extension cord while walking across the stage to receive his diploma. I could look at the class yearbook, but I didn’t buy one. Maybe Royce has one, or Justin, or our moms.

I finished college, and I guess Royce and Justin did, too, if they actually went to college. I imagine that wherever they were in those years after high school, we spent Friday nights doing the same thing—drinking keg beer and kissing girls. At least, that’s what I did. Or maybe Royce joined the military and Justin took up a trade and the McDonald’s shortstop married young and the left fielder started a meth lab in his tool shed and is now serving out his sentence while the scars from the chemical fire calcify.

I loved college. I loved drinking keg beer and kissing girls and I loved that high school was over, which I hated even more than I loved college. I was not athletic or particularly attractive and my pants were too big for me. Like most of the unpopular, I thought my high school classmates were assholes, although I realize now I was the biggest asshole. I scowled so much that it would take several rounds of Botox to lessen the lines between my brows. Or maybe it is less the teenaged scowling and just aging that has given birth to these lines. That’s one thing I know for sure: we’re all older now. Whether we finished high school or started college or built meth labs in the tool sheds behind our houses, we’re way too old for Little League. I haven’t eaten McDonald’s in a decade.

Aging bothers me even more than high school did. As I get closer to 30, I feel like I did on my 13th birthday. Maybe then I was just afraid that Julie of the Woods would be the last book my dad read to me, but now I have an undying fear of getting old that might only end when I’m actually dead. Maybe my first kiss, maybe the rest of team, is okay about getting older. I imagine that the happiness of careers and marriage and children could mask the unfortunate fact of aging, of baldness and hearing loss and weight gain, but I have no career, and even if I wanted to get married and have children, I’m gay, so it’s not something I can just do. Besides, if I got married or had children I could no longer pretend to be anything other than an adult.

But even if I don’t want to be a grownup, I wear sweater vests when I’m cold and worry about bills and only drink beer on the weekends. I still kiss girls, but only one. I eat salads and smoke just one cigarette a day. I listen to the same music as my parents. I drink decaf after five. And the older I get, the more I have to pee. It doesn’t just happen when I wake up in the morning, a full bladder forcing the day on the rest of my body. Now just thinking about peeing makes me have to pee. When I’m in bed at night, reading to myself and thinking about how I hope I don’t have to get up and pee, I always have to. It’s worse when it’s cold, of course, which makes me dread getting up to pee more, which makes me think about peeing more, which makes me have to pee more. Five or 10 minutes after first thinking, “I really don’t want to pee and I shouldn’t have to pee because I just peed,” I have get up and pee. I sit on the toilet and use all the muscles in my lower body—even my calves and toes get involved—to push out all the urine that could possibly be hiding in my bladder so I don’t have to get up again before morning. It happens every night.

A confession: while it is true that I’m not married and I don’t have a career and I pee in the night, I do know a bit about what happened to the rest of the team, the rest of my classmates, my first kiss. It’s almost hard not to know who is married and who is pregnant and who just bought their first house or even their second. Even if my parents didn’t still live in the same small town where I grew up, didn’t still read the weekly paper’s marriage and birth announcements and then tell me the news on the phone, there’s Facebook.

Justin is not my Facebook friend and so I don’t know what he is doing or where he lives or if he’s single or married or divorced, but Royce is my Facebook friend. From this, I know that he recently got married, and lives in our hometown—a place in the North Carolina mountains that is so beautiful it’s impossible to hate despite the misery and the small humiliations of high school. He has no kids of his own, but he has a wife and a niece and a house. And he’s sick. Royce, my first kiss or maybe the cousin of my first kiss, has ALS.

This makes me so sad, and not just because an old friend having ALS is another reminder that we are too old for Little League, that we will all die, but because it’s just sad. Death is sad and dying is sad and, I imagine, that knowing your last years are these years, is the saddest. I wonder if he and his new wife can enjoy their new marriage or if they can just prepare for the small future they have left. I’ve looked at his wedding phones and wondered if he knew then. I wonder if people cried at his wedding not just because people cry at weddings, but because they also knew. Every second that passes is a second that passes, but most of us don’t know how many seconds we have left. Royce does.

Does Royce have to pee in the night? That’s the thing that really gets me when I think about my first kiss. Maybe if he has to pee tonight, he can still do it,, but in a few years or a few months, he’ll be in a wheelchair. Will his new wife have to help him out of bed and into the bathroom? How many seconds until he can’t make it to the bathroom at all, can’t even pee on his own?

When we were young, we beat Burger King and lost to Burger King and listened to our dads read Julie of the Wolves. Our bladders were strong. We went to middle school and high school and college. We drank keg beer and thought about kissing girls. We didn’t know that death might come when our marriages are new and we’re moving into our first homes. We’re not really old now, not yet, but we are old enough to get fat and go bald and have our own kids. We’re old enough to forget exactly who our first kisses were, and wonder if they pee in the night.

It’s not because he was my first kiss or even because we were classmates and friends, but because I know what ALS does to the body because I’ve looked it up. I know that it starts with a loss of balance and ends with a body that is under control of the brain but not the mind. I learned this a few days ago when I came across a link to a blog he’s writing about living with the illness. Specifically, the blog is about his goal to hike all 900 miles of trails in the Smokey Mountain National Park.

Facebook is where I judge. I’m at the age when more of my old classmates are married than not. While it seems to me that anyone under 35 is too young to have a child, apparently many of my old friends have not just babies but toddlers or even real children. Old friends post pictures of their weddings, and I look at them while I’m supposed to be entering data at my temp job. Ah, I think. He’d look good in his tux if he hadn’t gotten so fat. And she looks beautiful in her wedding dress but how beautiful is she going to be with a dozen children hanging off of her and a husband who thinks of someone else when they have sex. I suppose I could be jealous of them, but, I tell myself, they are probably more jealous of me.