Termites in the Globe

Praise for the usefullness of uselessness. 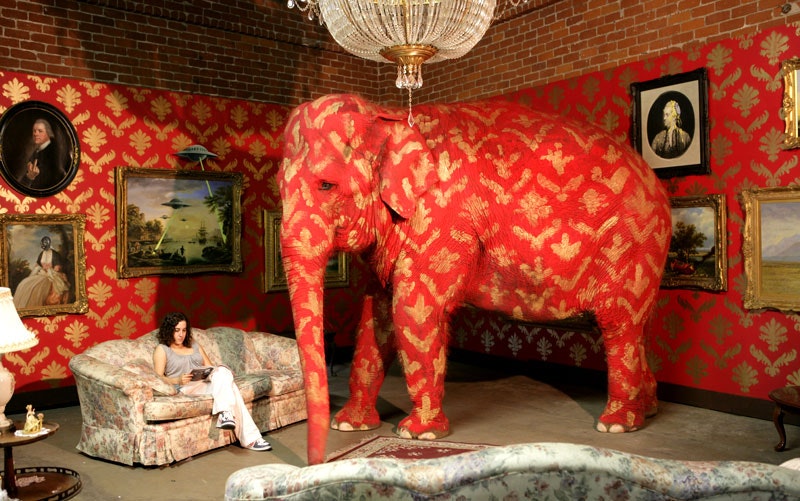 Art is by most objective standards a useless endeavor. You can’t repair our nation’s crumbling infrastructure with a sonnet; you can’t beat back a terrorist-affiliated insurgency with a performance piece, even if it involves some combination of meat, elephant dung and/or Lady Gaga. Go ahead and sing “We Are the World” till even starving Ethiopian children with giant bellies cover their ears and pray for death, but the fact remains that the last best hope of man isn’t Bono finding what he’s looking for or Angelina Jolie adopting it but the loose change in Bill Gates’ underwear drawer. Relevant artists are the white elephants of our times—uselessly bloated, irritatingly stentorian, semi-sentient tschotskes. The only real difference between the two is that you can imagine situations in which someone might actually want to look at a white elephant.

The idea of artists as white elephants isn’t mine—it comes from a famous 1962 essay by Manny Farber titled “White Elephant Art vs. Termite Art.” Farber isn’t talking about political art precisely, but his concepts are analogous. For him, white elephant art is “Masterpiece art, reminiscent of the enameled tobacco humidors and wooden lawn ponies bought at white elephant auctions decades ago.” White elephant art, then, is huckster art with a patina of pomposity, art that insists on Meaning with a capital M. As Farber says:

“The three sins of white elephant art (1) frame the action with an all-over pattern, (2) install every event, character, situation in a frieze of continuities, and (3) treat every inch of the screen and film as a potential area for prizeworthy creativity.”

In contrast to white elephant art and its demand for control and big sweeping import, Farber lauds what he calls “termite art.” Termite art is small art, which burrows inward away from all that tiresomely bourgeois signification.

A peculiar fact about termite-tapeworm-fungus-moss art is that it goes always forward eating its own boundaries, and, likely as not, leaves nothing in its path other than the signs of eager, industrious, unkempt activity. The most inclusive description of the art is that, termite-like, it feels its way through walls of particularization, with no sign that the artist has any object in mind other than eating away the immediate boundaries of his art, and turning these boundaries into conditions of the next achievement.

Where white elephant art stomps about demanding attention and piles of hay, termite art is self-sufficient and self-sustaining, turning its mandibles resolutely from the upper world and towards an existence in cracks and crevices. Art thrives in the small spaces, away from the spotlight or the filthy gleam of lucre. “The idea of art as an expensive hunk of well-regulated area,” Farber declares, “sits heavily over the talent of every modern painter, from Motherwell to Andy Warhol.”

Critic Terry Eagleton, in his book After Theory, makes a similar argument, contrasting the doughty superfluity of art with the crushing systemization of capitalism.

In its ruthlessly instrumental logic, [capitalism] has no time for the idea of nature—for that whose whole existence consists simply in fulfilling and unfolding itself, purely for is own sake and without any thought of a goal. This is one reason why this social order has a boorish horror of art, which can be seen as the very image of such gloriously pointless fulfillment. It is also one reason why aesthetics has played such a surprisingly important moral and political role in the modern age.

One contradiction inherent in this notion of termite art is that its gratuitousness is filled with intention; it is praised for the usefulness of its uselessness. Termite art is actually more dependent on capitalism for its meaning and content than is white elephant art. White elephant art says what it has to say (“Crime Does Not Pay!” “Do Unto Others.” “Eat Your Vegetables!”) and could presumably do the same whether it were talking to theocrats, oligarchs or robber barons. Termite art, on the other hand, is by nature subcultural, which means it needs a culture in which to sub. It’s not a mistake that Farber begins his essay by talking about the dried-up hulk of elephants before moving to the insects crawling about inside them. You can have the first without the second, but not the second without the first.

From this perspective, termite art seems even more well regulated than elephant art, flinging itself about in random patterns whose very randomness is over-determined. The termites furious play reeks of the desperate grant-bound verbiage in the artist’s statement of a tenured radical.

The uselessness of art, in short, ends up looking not like a way to undermine capitalism, but rather as part and parcel of it. Art doesn’t matter not because art is in itself useless, but rather because capitalism has put the mattering elsewhere: in the pocket of Gates rather than the performance of Gaga. To praise irrelevance is to make a virtue of necessity—or even to make a necessity of something that maybe doesn’t need to be as much of a necessity as all that. Surely there’s some way for art to move the world?

Paul Feyerabend thought there were, anyway. Feyerabend isn’t an artist or a critic; he’s a philosopher of science. And as a philosopher, his method was what you might call termite-like. He rejected broad generalizations about science and the scientific method, choosing instead to focus on historical particularity—“a concentration” as Farber said, “on nailing down one moment without glamorizing it.” Feyerabend argued that there was no scientific method; no formulation of hypothesis which were then tested by evidence. Instead, he explained that scientists brought together theory and experiment and hypothesis all in one go…and when the result has ugly holes, the scientists paper them over with approximations and guesses—which is to say, they make shit up. Or, as Feyerabend put it:

Ad hoc approximations abound in modern mathematical physics. They play a very important part in quantum theory of fields and they are an essential ingredient of the correspondence principle […] Science gives us theories of great beauty and sophistication. Modern science has developed mathematical structures which exceed anything that has existed so far in coherence, generality, and empirical success. But in order to achieve this miracle all the existing troubles […] had to be concealed by ad hoc hypotheses, ad hoc approximations and other procedures.

One of Feyerabend’s main examples for this process is Galileo. In Galileo’s day, he notes, there was no particular reason to believe that looking through a telescope would give you a particularly accurate view of the heavens. The telescope itself was not constructed on the basis of a deep study of optics (a study which Galileo had not made)—it was put together by trial and error. Furthermore, while the telescope clearly worked very well in looking at objects on land, when pointed to the stars different people invariably saw different phenomena through it. There were neither theoretical nor empirical grounds for changing the entire cosmology of the universe on the basis of Galileo’s observations.

Nonetheless, the cosmology changed—not because of evidence or theory, but because Galileo was an imaginative and skilled propagandist. As Feyerabend says,

How can we lure [people] away from a well-defined, sophisticated and empirically successful system and make them transfer their allegiance to an unfinished and absurd hypothesis? To a hypothesis, moreover, that is contradicted by one observation after another if we only take the trouble to compare it with what is plainly shown to be the case by our senses? [….] It is clear that allegiance to the new ideas will have to be brought about by means other than arguments. It will have to be brought about by irrational means such as propaganda, emotion, ad hoc hypotheses, and appeal to prejudices of all kinds. We need these "irrational means" in order to uphold what is nothing but a blind faith until we have found the auxiliary sciences, the facts, the arguments that turn the faith into sound "knowledge."

Feyerabend insists that Galileo was not wrong; he wasn’t betraying science. On the contrary, he was doing what scientists do when they do science successfully—imagining and persuading. Galileo was a white elephant artist, putting meaning in every part of his canvas, and indeed, every part of the universe. Compared to such successful aesthetic hubris, Bill Gates looks like a beaming half-grown yokel in knee-britches.

Interestingly, Feyerabend at times speaks of scientists in much the same way as Farber speaks of white elephant art—as presumptuous, bloated, intolerant, self-satisfied, and overbearing. In fact, Feyerabend says that “the motive force” behind his book was “Anger at the […] conceited assurance with which some intellectuals interfere with the lives of people, and the contempt for the treacly phrases they use to embellish their misdeeds.” Feyerabend, too, has a vision of a termite world. Or as he says, “I thought that regarding all achievements as transitory, restricted and personal and every truth as created by our love for it and not as ‘found’ would prevent the deterioration of once promising fairy-tales …” Even white elephants must be seen as termites, burrowing in upon themselves. The key is not to celebrate artists like Galileo for changing the universe, but to see that Galileo, like Gates, is a tapeworm, a fungus, a moss, “leaving nothing in its path but the signs of eager, industrious, unkempt activity.”

Ultimately, Feyerabend concluded that his wish for a new insect view of the world was “just another example of intellectualistic conceit and folly.” Farber, too—in true termite-art fashion—disavowed his essay on termite art. Demanding an end to white elephants is a white elephant way to behave; ultimately termites must eat themselves. What they leave behind them is, perhaps, a small space filled with meaning.