Down one of Brooklyn Heights’  fascinating streets. 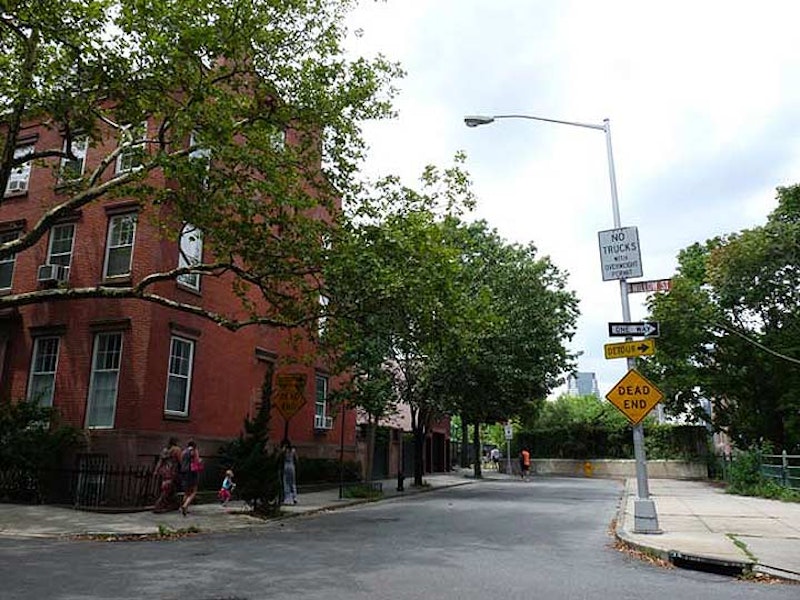 Middagh Street is another one of those Brooklyn Streets you rely on intuition to pronunce. My best guess is Mid-dah, as if the g wasn’t there, like Erin Go Bragh. My intuition has failed me before, as my pronunciations of JOR-a-lemon and COR-tel-you will demonstrate. And I say Luquer Street is LU-ker, while others say lu-QUEER.

Middagh runs east to west, from just west of Willow east to Cadman Plaza West. The endpoints used to be Columbia Heights and Fulton Street. When walking north in Brooklyn Heights, it’s the first street after the fructiferous trio of Pineapple, Orange, and Cranberry.

Carbohydrate-conscious dieters will feel right at home in Brooklyn Heights as a fruit salad of thoroughfares welcomes them. According to one story, a little old lady, who would have worn tennis shoes had they been invented, is responsible for their names, a century and a half before little old ladies started wearing tennis shoes.

Before the IRT subway arrived in 1908, Brooklyn Heights was one of the more secluded areas in Brooklyn that only the very wealthy could afford (rather like today). Jealousies and disputes arose among the moneyed gentry. The story goes, as recorded by the WPA Guide to New York, that in the decade prior to the Civil War, a local resident, whose name is given as Miss Middagh, resented her aristocratic neighbors and tore down the street signs bearing the names of the offending families and hastily installed signs bearing the names of her favorite fruits and trees, Pineapple, Orange, Cranberry, and Willow. When Brooklyn city authorities restored the original street names, Miss Middagh struck again and changed them back. This tug-of-war eventually resolved itself in the lady’s favor with the streets retaining her preferred names to this day.

The more likely story is that they were simply named by early-19th century landowners the Hicks brothers, John and Jacob, who developed large swaths of the region. Each brother bore the middle name Middagh, their mother’s maiden name. 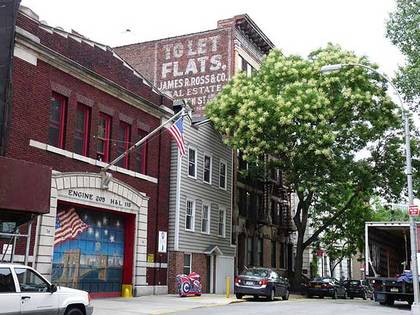 Above we're looking west from Cadman Plaza West at Engine 205/Hook & Ladder 118, at #74 Middagh. A famed photograph taken on 9/11 shows H&L 118 making its way across the Brooklyn Bridge to the burning towers, where the company lost six firefighters. The firehouse also battled raging wildfires in the Hamptons on eastern Long Island in the 1990s and the devastating St. George Hotel fire in August 1995.

A couple of doors away is one of Brooklyn’s more prominent remaining painted ads, this one advertising a long-gone real estate office on Fulton Street and Nostrand Avenue. The old-fashioned “To Let Flats” today means “Apartments for Rent.” Why place a prominent ad like this on modest Middagh Street? 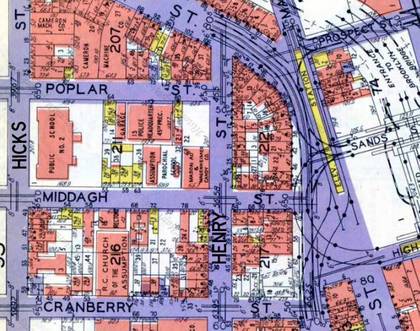 The answer is simple. Before about 1940 or so, the Brooklyn Bridge carried elevated trains between Brooklyn and Manhattan at a terminal near City Hall. From an elevated train shed on the east side of Fulton Street, els and trolleys converged, and then fanned out across Brooklyn to far-flung terminals in Coney Island, East New York, Bay Ridge, Coney Island, Canarsie, and many other locales. Brooklyn’s Fulton Street El, Myrtle Avenue El, Lexington Avenue El, and 5th Avenue El all began their Brooklyn runs here. By the early '40s, many Brooklyn els were on their way to extinction, as well as the trolleys; today, the Brooklyn Bridge is the carrier of automobiles as well as pedestrians and bicyclists, who uneasily share a boardwalk running through the center of the span.

Any ad on Middagh Street facing the el platform would be seen by thousands daily! 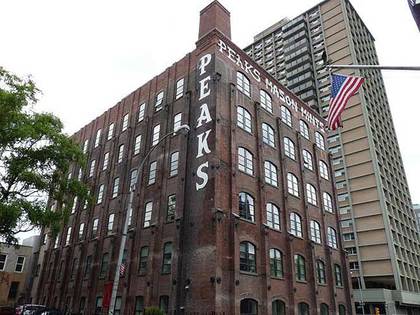 This massive factory building was constructed by Mason, Au and Magenheimer Candy in 1885 at #20 Henry Street, at the NW corner of Middagh. According to advertisement researcher Walter Grutchfield, the company was in business here until 1949. The company was founded by confectioners Joseph Mason and Ernest von Au in 1864.

In actuality the painted signs on the building are a bit misleading since there was no such candy as “Peaks Mason Mints”; there were Mason Peaks and Mason Mints. Mason Peaks was a coconut-chocolate combination (like Mounds) while Mason Mints was a chocolate-covered mint patty (like today’s Peppermint Pattie). Mason also made Dots, a fruit or cinnamon-flavored gumdrop, and Crows, a licorice-flavored gumdrop. Both are still distributed by Tootsie Roll, which acquired Mason in 1972.

In 2012, Canyon-Johnson Urban Fund, a development group including former LA Lakers superstar Magic Johnson, completed the conversion of the building into luxury residences, with some “affordable” ones also included. In a nice touch, the painted ads were not only retained, but renovated to their current splendor. 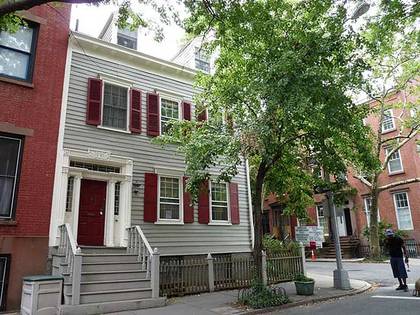 A walk on Middagh Street reveals a wealth of handsome woodframed houses that, by necessity, have been re-sided over the years. By far, Middagh Street has the lion’s share of such buildings in Brooklyn Heights, which is otherwise dominated by brownstones and brick buildings.

The dormered #24 Middagh sits on the southwest corner of Willow Street. It’s handsomely appointed in light grey with a maroon door and window shutters. It was constructed in a Federal-style in 1824 or 1829, depending on which source you use, with Ionic pilasters and leaded glass above the front entrance. The door begs for a closer view, which is provided by the Wooden House Project. It still has a “back house” for carriages in its rear yard.

Known by some locals as the “queen of Brooklyn Heights,” #24, Federal-style clapboard building, was constructed in 1829 by Eugene Boissolet, making it one of the older buildings in the neighborhood. 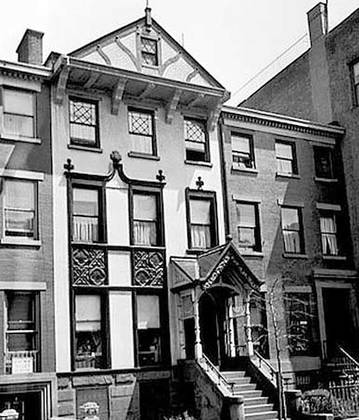 To some, #7 Middagh Street remains the most fascinating building on Middagh, even though it was torn down in the late 1940s when the Brooklyn-Queens Expressway was bruited through the district.

Brooklyn Heights’ leafy lanes have been a mecca for the lions of literature for much of the 20th century and on into the 21st; it all began in the pre-Civil War period when Walt Whitman’s Leaves of Grass was published on Fulton Street. At one time or another Whitman, W. H. Auden, Truman Capote, Hart Crane, Norman Mailer, Arthur Miller, Henry Miller, Carson McCullers, Thomas Wolfe, and for two years, the nonpareil horror master H.P. Lovecraft, have all lived in Brooklyn Heights and Cobble Hill, attracted by their quiet atmosphere and the contingent of like-minded literati.

In parts of 1940 and 1941, 7 Middagh was home to several of the brightest literary lights of the day, beginning with Harper’s editor George Davis who rented the townhouse with his companion, novelist Carson McCullers, for the cost of $75 a month, a moderate sum in those days. They offered leases to W.H. Auden, Paul Bowles, British composer Benjamin Britten, and their friend Gypsy Rose Lee, the stripper who was dabbling as an author herself (The G-String Murders). The friends’ tenure didn’t last long, for only a couple of years, until World War II and later, Robert Moses and his wrecking ball and steamroller loomed. 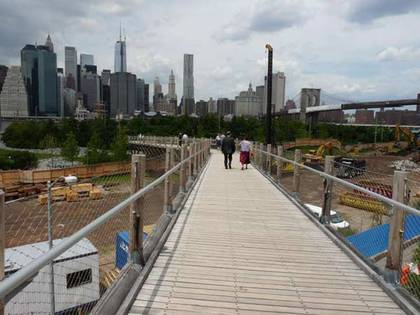 With the new Brooklyn Bridge Park under piecemeal construction (several sections have been opened, with the finished park expected to stretch from the waterfront along Columbia Street north and east to Main Street in DUMBO) engineers were faced with a challenge: how to get foot traffic from Columbia Heights across the Furman Street gulch to the new park. Thus the new Squibb Park Bridge was conceived and completed in late 2012, named for pharmaceuticals manufacturer E. R. Squibb, who ran a large manufacturing plant on Columbia Heights beginning in the 1920s (it later moved to New Brunswick in the 1960s).

The bridge was built with a little “give” and swayed slightly when crossed (many people complained of motion sickness when crossing it), and the decision was made to repair it to eliminate the swinging. The repairs lasted two years until the Squibb was reopened in early 2017.