The Scarlet Letter Society: Chapter One

"She had not known the weight until she felt the freedom." -Nathaniel Hawthorne, The Scarlet Letter 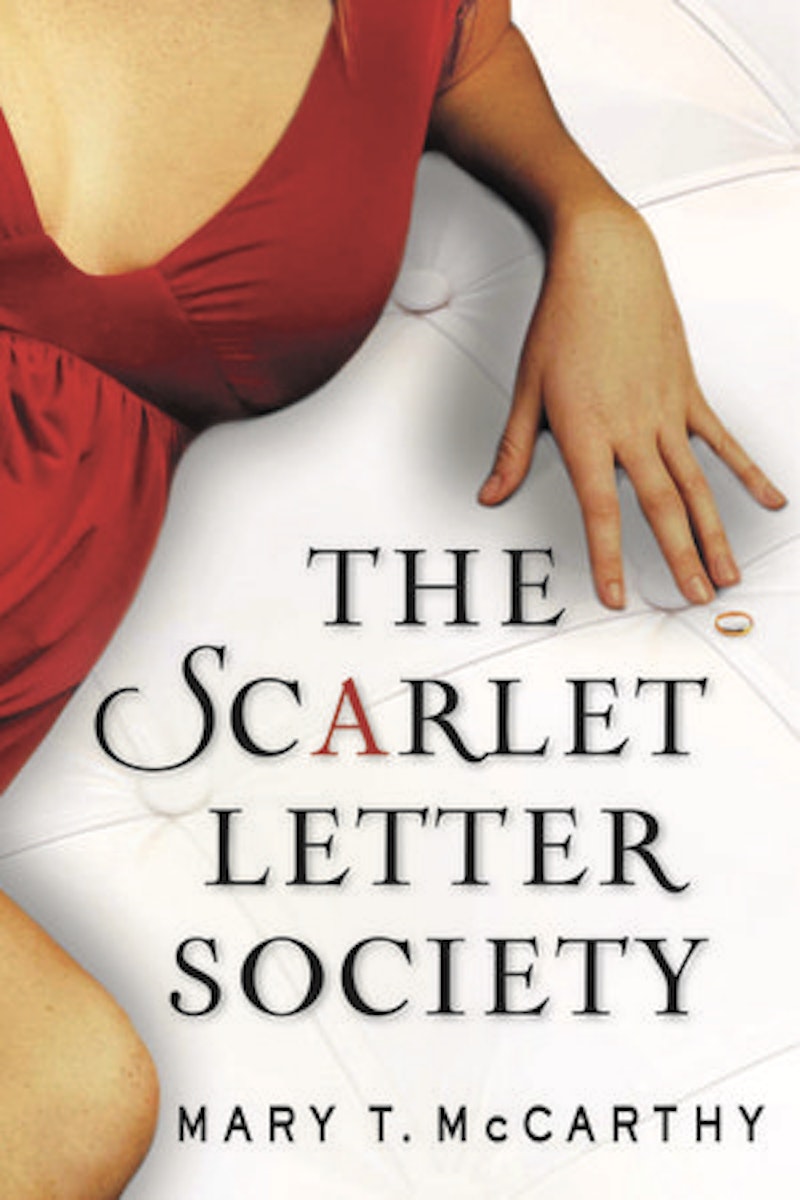 Eva Bradley, a petite woman in her early forties with neatly bobbed black hair, wore her standard issue corporate attorney Ann Taylor black pantsuit and brightly colored scarf du jour. She’d taken a small box from her Coach purse, removed a brown bottle, and placed it in the middle of the coffee shop’s table with a dramatic, near jazz-hands-level flourish.

The small glass bottle landed—thonk—in the middle of the monthly invitation, accidentally hitting a bullseye on the standard giant red letter “A” watermarked on the page.

“But he knows where she’s goin’ as she’s leavin’ /She’s headed for the cheatin’ side of town.“ –"Lyin’ Eyes," The Eagles

“The scarlet letter was her passport into regions where other women dared not tread.”
–The Scarlet Letter, Nathaniel Hawthorne

Lisa always printed out the invite, which featured the same book quote at the bottom and a different song lyric each month. Scarlet Letter Society membership was exclusive, right now limited to only three women: Eva, Maggie and Lisa. The club bore the name of the literary bible of adultery: Nathaniel Hawthorne’s The Scarlet Letter.

Glancing at the mysterious bottle, Maggie laughed. Next to her Lisa gaped, widening her chocolate-brown eyes; wrinkles instantly rippled like the international symbol for ‘bacon’ across her bewildered forehead.

Maggie Hanson, who owned the vintage clothing shop next door to the café where the women met, picked up the box.

“Comfortably Numb,” she read in her thick Boston accent, still smirking. “Well, that’s a good a name as any for a blow job spray. Says here, ‘the refreshing spritz contains a mild numbing element to coat the back of the throat, suppressing gag reflex during oral sex.’”

Eva picked up the bottle, adding in a sing-songy ad-jingle voice, “Discreet enough to take with you wherever you go! Doubles as a breath freshener!”

“Where the heck are you going?” said local bakery owner Lisa Swain, looking completely stupefied as she glanced at the flavor on the package: Chocolate Mint.

“It comes in flavors?” she asked, her usually pale face beet red against her light blonde hair.

Maggie raised her eyebrows at Lisa and told her, “You know, this stuff works better when guys use it.”

Eva rolled her eyes. “Is that what all your gay best friends tell you?”

Maggie replied, “No, smarty pants. I mean if you spray it on your man’s fundangles, it takes him longer to come. Also, his junk is now a chocolate mint lollipop. Everyone’s a winner.”

“I planned on using it for an upcoming meeting in DC,” said Eva sheepishly, a sexy twinkle in her eye.

Maggie nodded knowingly. “Hopefully not during the meeting, ya big whore. Let me guess,” she said. “Late night meeting with your intern, Ron?”

Lisa chimed in, “Honestly, Eva, I can’t believe you’re sleeping with someone who was born in the 1980s. He was named after Ronald Reagan, for the love of God! And you were in high school then!”

“Technically, I was only in 8th grade when he was born.” Eva blushed. “I mean, it’s not like I’m old enough to be his mom or anything.”

All three ladies laughed. Lisa took a sip of her iced coffee drink and pointed out,

“I picked a really awkward day for a mint mocha latte.”

“So happy to be here.” said Tara. “I was looking for a copy of the new Stephen King book, and then, of course, the Baltimore Sun.”

“Of course,” said Zarina, walking across the worn wood floors. The shop was painted in 80s classic bright yellow to match its vintage pride and joy, a Ms. Pac Man arcade game.

“You never have to worry about the battery dying on these,” said Tara.

“True,” said Zarina. Her mother Kate had opened this shop after her dad, an Iranian immigrant, died six years before. Kate founded the shop because, she said, “Women need a place to circle their wagons- even if their wagons come in the form of minivans.” Kate was an 80s girl to the max, thus the inspiration for the shop name, Zoomdweebies, a reference to the Judd-Nelson-as-John-Bender character from the 1985 John Hughes film The Breakfast Club.

“And not surprisingly, I’ll have my usual,” said Tara, smiling. Zarina knew that was a double shot espresso iced latte with skim milk and a shot of vanilla.

“What would this town do without your shop?” said Tara. “I don’t want to live in a world where you can’t still walk somewhere to buy a book, coffee and a paper.”

“Me either,” said Zarina. She’d finished college the year before, returning home to run the coffee shop when her mom began working as a professor at the local university. Not knowing what she wanted to do with her Journalism degree, she figured running Zoomdweebies was as good an idea as any for the moment.

Besides, she liked it here. Her seemingly quiet personality allowed her to fade into the background to a point where people forgot she was there. But huddled over a laptop at a small desk in the corner of the shop behind the counter in-between making avocado and brie wraps and nonfat chai lattes? Like the janitor in The Breakfast Club, she heard and saw everything.

Tara thanked Zarina for the coffee and settled into a cozy, worn red velvet chair to read her paper. Zarina knew Tara only had a short time before she had to go pick up her preschooler.

Next to Tara, Pretty in Pink played silently on a vintage TV and VHS player. “Wonder whatever happened to Jake Ryan after that movie?” Tara pondered when she saw it playing. “Bet he’s still hot.” The shop played an endless series of 80s movies on VHS: Ferris Bueller’s Day Off, Stripes, Ghostbusters, Sixteen Candles, Caddyshack, and the stacks went on and on. Kate found the entire VH1 series of “I Love the 80s” and had it converted backwards from digital into VHS tapes by some local hipster geek who told her, “Excellent choice in formats, dude.”

Tara and the shop’s other regular customers loved the movies playing in the background, often turning up the volume to watch a scene or two. It was always the cool people who gathered around to watch the Carl Spackler “Cinderella story” scene from Caddyshack and asked to turn the volume up. Those were the customers she wanted as regulars, not the uptight, pantyhose-wearing mothers who demanded Airplane be turned off when Captain Oveur asks Joey if he’s ever seen a grown man naked.

Those bitches can go to Starbucks, Zarina had thought.

All kinds of people came into the café. As a journalist, Zarina kept a notebook to write character sketches for future stories. There was a husband and wife who stopped by every Tuesday morning and ordered exactly the same thing. Only they’re on their way to marriage counseling, thought Zarina. There was a teenage boy who came in at the same time after school every day, buying only a bag of Mystery flavor Air Heads. He’s only here because he hopes the blonde lacrosse player will come in with her friends to giggle over skim mochaccinos.

And there were the moms. Although occasionally there was the lone mom like Tara, who came in to actually read a book and get some peace and quiet while her kids were at school, most of the moms travelled in gaggles, like geese. There were PTA moms (the most annoying; the way they yammered on about cookie dough fundraisers and teacher appreciation donuts made Zarina’s head spin), save-the-planet moms (cloth diapers, raw organic homemade baby food), and brand new moms (dark circles and sweatpants) just trying to have human contact with someone other than a newborn.

Thinking of the early morning visit of the adulteresses, Zarina smiled at the thought of someone like Tara overhearing a conversation about blow job spray.

“’Adultresses’ seems like an outrageously old-fashioned word to use,” Zarina thought, as she cleaned the espresso maker, “but what else is there to call them? The Women Who Cheat on Their Husbands? MILFs?”

Some would say ‘sluts’ or ‘whores’ in a more serious way than the club members, who used the terms jokingly.

“Maybe it’s best to just call them what they call themselves, in honor of Nathaniel Hawthorne’s famous novel,” Zarina decided. They’re simply known as “The Scarlet Letter Society.”