Carving the Life of a Writer

And where I found my inspiration. 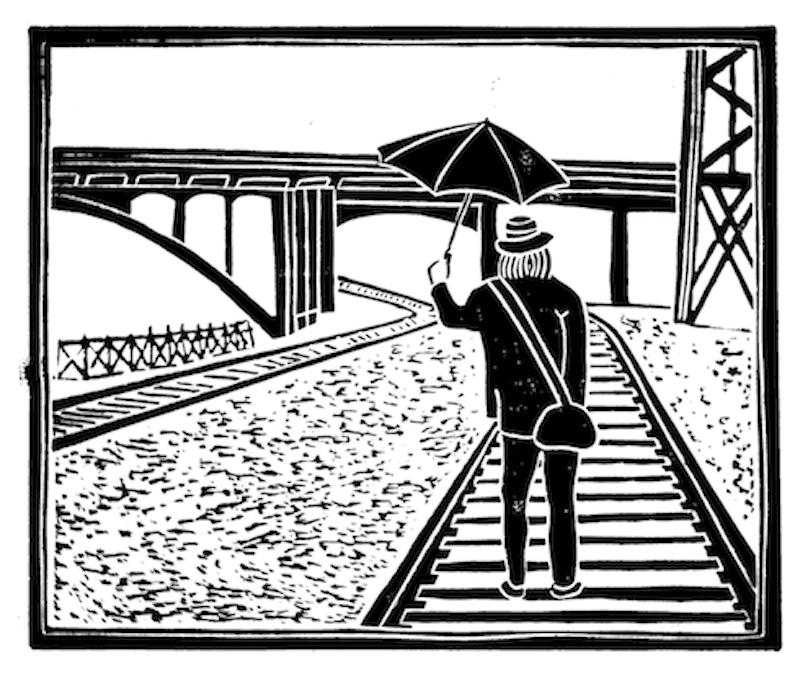 Recently I was commissioned to come up with a t-shirt woodcut design for a North Hollywood Literary Festival. The email from the festival sponsors requested something that “depicts the journey of the creative writer in these modern times when so few people read.”

My initial brainstorming elicited depressing ideas like a writer committing hara-kiri with a fountain pen, the Greek character Sisyphus rolling a massive tome up a hill, a man drowning from the weight of a typewriter tied to his leg. I rejected these early concepts as too dismal and clichéd. Plus, who the hell uses a typewriter or fountain pen these days?

I finally found inspiration after traveling to downtown Los Angeles to visit a friend. We took a walk beside the Los Angeles River across from Dodger Stadium and I noticed a homeless man writing in a journal. He wore a tattered suit and his shoes were scuffed and torn. He had an umbrella with him though it was summer. He evoked the spirit of Kerouac, Woody Guthrie and Henry Miller. In an instant I knew the woodcut Image I wanted to carve.

The festival sponsors asked that I write a short essay explaining how the image embodied the modern writer. Here’s what I submitted:

“The Man is walking the train tracks into the unknown. He takes his journey slowly, focusing on each step, unsure where the tracks will lead. His face is turned away from us emphasizing his anonymity. He wears his best suit—his only suit—as he carries his meager belongings on his back.

“His umbrella shields him from the unrelenting sun and the birds that attempt to drop turds on his beloved fedora. The only people who notice him are the wayward souls who live beside the tracks. Some view the Man as a wayward soul as well. But his journey is not dictated by whim. This is his destiny.

“He walks on the wooden railroad ties. This protects his shoes from damage and prevents footprints. He understands that good walking leaves no path behind.

“He has faith his internal compass will kick in at some point. As he walks, his legs grow tired and heavy. Sometimes he becomes angry at his plight. But he persists until he feels wings upon his back lifting him and easing his gait.

“He always believed he would recognize his destination when he got there. Now he senses there is no place to get to. He is already there. He has become the road and the knower of roads.”