And our hectic day-to-day lives. 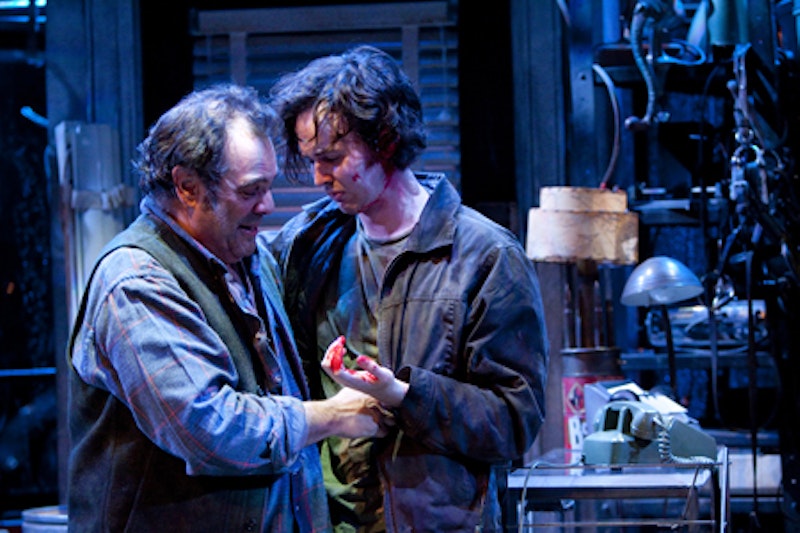 The past few days I’ve burned thousands of minutes and calories talking on the phone with car insurance companies and walking around my old neighborhood in pursuit of a great used car. In the interim, my daily reading material piled up to the sky; that is, my Google Reader account was chock full of crap as old as—gasp—two or even three days ago. I’ve set my Political Blogs category to start with the oldest unread posts; this means that when I play Catch the News Cycle I read/skim/watch about 18 or so voices explain away days of intrigue and gossip and Major Developments in a matter of hours. This has the odd effect of shrinking time, of compressing umbrage and catharsis to the point where it’s hard to tell what you yourself think of this, that, or the other. Without trying to wax too something or other (it’s going to happen anyway), I am a bit maddened by the effect this scenario has on me, as I lose my tenuous grip on the day-to-day flow of ideas and am—and yet I am also comforted by the madness.

The fact that I sometimes do this around three in the morning probably enhances the time warp. This time around, this game of catch up is particularly disconcerting because last night I watched a spectacular performance of David Mamet’s American Buffalo at The Studio Theater in Logan Circle.

Taking place entirely within a grubby pawnshop, the play is a trenchant snapshot of 1970s America (specifically Chicago, where it’s set). There are only three characters—Donny, the store’s owner and the de facto leader of the group, Bob, a young man who might be a drug addict who has been taken under Donny’s wing, and the owner's manic friend Teach, whose constant bitching and griping and foul mouth is grounds for a lot of laughs and teeth grinding. The dialogue is unnervingly quick, rife with repetition, maddening confusion and simple logic. The three characters plot to rob a coin collector around the corner, and as their plan unravels so do their interactions, culminating in blood.

(I feel obligated to mention that Splice readers may or may not recognize two of the three actors on stage last night. “Teach” was played by Peter Allas, who was Mario the Calzone Man on Seinfeld and the contract killer Salvatore on the Sopranos. “Donny” was played by Edward Gero, who along with collecting an absurd number of stage acting awards has narrated many Discovery Channel titles, acted in a ton of stuff in Baltimore and played a bit role in Die Hard 2.)

It’s a short play, about an hour and forty-five minutes, and by the second act I began to see the characters not as people living in 1970s Chicago, but as the same person, an extended allegory on the human condition. There is tension throughout the performance as slowly, maddeningly, the plot begins to take shape. Donny sells a buffalo nickel to a stranger for $90, sees that this stranger lives around the corner, and so hatches a plan to rob him when he goes out of town. As this builds, Teach goes crazier and crazier for want of action, of truth, wanting everything to happen right away without any questions. He’s the id in the group, instinct and condemnation unleashed. Donny tries to keep Teach from losing his cool. Donny is obviously the ego, the calm(er) rational(er) force in the friendship that at times doesn’t really feel like a friendship. Bobby is pretty much hopeless as a functioning adult; he can’t get food orders correct and he can never explain himself. He’s a problematic super ego, the group’s frayed and beat-down conscience.

The repetition, the ping-pong dialogue and the sense that, despite how awful they are to each other, they are all they have—Donny, Teach and Bobby represent a sort of grinding futility, the zeitgeist of a modern America torn to pieces by World War II, rebuilt by the Greatest Generation, reformed in the 60s, torn apart again in Southeast Asia in the 70s. They hang out in a pawnshop, full of useless shit that few if any have any use for in the end. Teach is rife with embittered entitlement and—in a single brilliantly timed slur—racial resentment.

American Buffalo is about futility; it’s about the grind of capitalism, the American dream, the glory-less struggle to make something of yourself and the anonymity of failure.

I was unmoored from politics and news and punditry and wonky charts for three or four days; why this resonated so well with American Buffalo I’m not entirely sure. The play is bleak, powerful. I was reminded of how immense and inspiring and terrifying the human psyche—the clashes inside our headspaces that define our day to day and year to year and birth to death—is and that missing a couple of blog posts means nothing and it means everything.