The Eerie Art of Fletcher Hanks 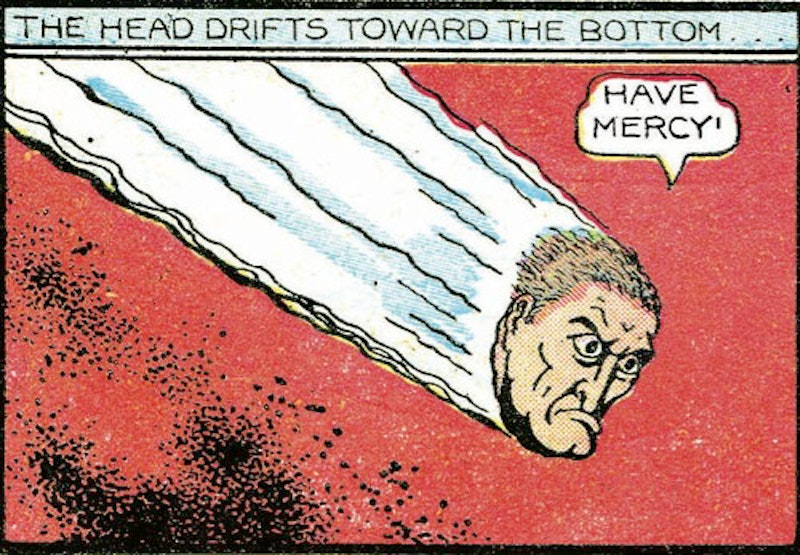 Between 1939 and 1941 a man named Fletcher Hanks produced a small number of superhero comics. They rest comfortably within the conventions of the superhero genre. Their nearly omnipotent protagonists fight crime, employ mysterious powers and devices, and protect the weak. But Hanks’ work, in both its plots and the searing starkness of his art, elevates these typical stories. His comics, despite the brutishness of their lines and of their plots, project an enigmatic, aching pathos. They’re also fabulously fun and filled with amusingly old-fashioned details—plenty of scientific rays and ridiculously square 1930s slang find their way into his generally simple narratives. You can find Hanks comics compiled in two volumes, I Shall Destroy all the Civilized Planets and You Shall Die by Your Own Evil Creation.

Hanks’ two main character are Stardust the Super Wizard and Fantomah, Protector of the Jungle. Stardust is a huge, muscled super-scientist who resides on a private star and watches over earth with a collection of sensitive detectors. Fantomah is a female spirit who takes the form of a blonde woman wearing a diaphanous gown. She protects the animals and natives of the jungle (Hanks draws the natives with a surprising degree of sympathy given the time, though sensitive readers will probably find them racist caricatures anyway). When enraged Fantomah’s head turns into a leering skull, though, she retains her blonde tresses.

Hanks’ stories follow a familiar rote: a madman and his thugs threaten Earth, the jungle or New York City. The narrative follows their plans, which are usually ludicrous: a series of invisible tubes that suck up America’s politicians and captains of industry, a combination of ravening panthers and carefully orchestrated bombing raids, a ray that prevents the earth from rotating, flinging the population into space. Hanks’ villains sneer and posture before their legions of impeccably suited and hatted lackeys. Their author has endowed them with some of the most striking, quotation-marked names I have ever read: “Skullface,” the “Gyp” Clipp Gang, the very wealthy Mark Lord, Lepus-the-Fiend.

The villains act with an elemental purity. Most of them want nothing but money—but most of them want lots of money: one comic details a plan to plunder the gold from Fort Knox, one of the many attacks on New York City focuses on raiding banks, and “Gyp” Clipp plans to stop the rotation of the earth in order to seize, literally, everything. It’s not hard to read a larger political point in these simple fables of larceny, especially given that they came at the tail end of the 1930s.

Hanks’ villains always succeed at least partially, and in this pattern we can detect a hint of bloodlust and certainly get a few prurient thrills. In the pages of I Shall Destroy All the Civilized Planets many people die, and marauding bombers raze Manhattan more than once. The heroes, despite their peerless power, always wait until the villains have sown at least a little death and misery before they intervene. The punishments that they deliver on the villains are surreal and nightmarish, evoking Poe and Lewis Carroll. Stardust captures “Mastermind” de Structo and assigns him the following punishment: “You tried to destroy the heads of a great nation, so your own head shall be destroyed!” Stardust therefore enlarges de Structo’s head (which then absorbs his body) and flings it into the intergalactic abode of  “the Headless Headhunter,” a towering troglodyte who grasps eagerly for the pleading and shrieking de Structo. Stardust also annihilates another villain (regrettably called “Slant-eye”) by giving him to a gigantic octopus made of gold. The plots have the lurid symbolic violence of a Greek tragedy, and an almost Roman appreciation of violence as an object of interest itself. If they don’t have much to say about the human condition we can still excuse them for their brisk movement, their odd reliance on equal doses of formula and wild imagination, and their oneiric logic.

Hanks’ illustration needs no qualifications. It has the rough power of medieval religious art. His characters assume the most agonized and artificial poses—take, for instance, the luminous beauty of the books’ cover, which shows Stardust flying in his “tubular spacial”, his back to the viewer, his arms held rigid at his sides, his legs pressed together and crooked slightly to the side. And Hanks draws faces, especially depraved and evil faces, like no other artist I have ever seen. “Skullface” clenches his jaws in rage and cruelty, fifth columnist Yew Bee glares in bland and fleshy composure, Mark Lord consists of a few lines that suggest taste and madness, and de Structo leers in prognathous hatred and greed. Lepus, a ropy-muscled degenerate, is perhaps Hanks’ finest creation—his pointed ears and pouting lips suggest an eerie, inhuman evil. The incidental characters with which Hanks peoples New York City receive no less attention; it’s surprising and thrilling to see that each person fleeing the doomed city has an individual, textured face. We must wonder if Hanks took these faces from his acquaintances or invented them (he included himself in one swift panel).

Hanks’ art, in its brutal simplicity, has few flaws. Despite his characters’ sacral stiffness he shows action and movement well, and he has a distinctive flare for composing panels, using silhouettes and putting his characters through grotesque transformation. In one especially haunting sequence the blocky, handsome Stardust distorts his hand into a sinewy, horrific claw, and in every Fantomah story the heroine’s anger changes her face into a stark, white skull.

Few of Hanks’ works survive. In his afterword to I Shall Destroy All the Civilized Planets comics scholar Paul Karasik recounts an interview with Hanks’ son, Fletcher Hanks Jr.; Hanks Jr. admits to having thrown away crates of his father’s illustrations. Karasik’s story is the weakest point of the volume. Karasik shares the interview in cartoon form—after the auratic power of Hanks’ drawing Karasik’s mannered, muddy style seems mawkish and absurd. By the end of the volume readers pant for more information about Hanks, and it’s maddening to have it doled out in miserly chunks as part of a story that’s as much about Karasik as it is about Hanks.

Hanks’ son describes his father as a brutish drunk who abandoned his family. He tells a story in which Hanks and his drinking buddies badgered Hanks Jr. into revealing the location of some hidden booze—this was the coal cellar, and in a scene out of Kafka or Faulkner the elder Hanks and his reprehensible friends lie amid the coal dust and filth and drink themselves into oblivion. Hanks Jr.’s stories are so fascinating (both in their treatment of Hanks senior and in their portrait of a hard childhood) that I wish we could have read them in transcript, rather than filtered through Karasik’s heartfelt but badly told and uninteresting story of disillusionment (Karasik expected rather more from his hero Hanks).

This disappointing coda notwithstanding I Shall Destroy All the Civilized Planets is a beautiful and oddly moving work. Hanks may have been a monster, but he gave his readers a world of violence and suffering rendered with all the stately pomp of an orthodox icon, a world in which the villains may shred the mantle of decency but ultimately suffer a fate more strange, cruel, and protean than that of their victims.