Infantilism has something going for it beyond the usual intrigue of fringe paraphilia. 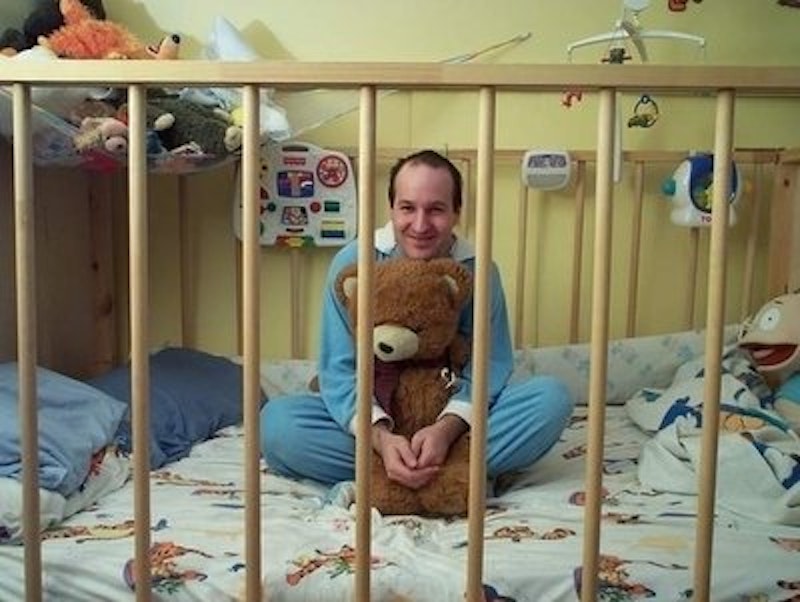 As jaded and decadent as I am, it wasn’t until my 44th year that I encountered Infantilism as a fetish. I knew of it, of course, but hadn’t actually met a practitioner. I knew from the pro dommes of my acquaintance that doing the Nanny Act paid top dollar, right up there with poop showers or heavy medical. You can make a lot of money shitting on Wall Street types, if you’re pretty. I have enough problems with my own guts and sufficient White European coprophobia to excuse myself from ever witnessing a Brown Shower, and medical scenes of any kind in any context give me the whim-whams. Infantilism had something going for it beyond the usual intrigue of fringe paraphilia. It had interesting wardrobe: baby wardrobe for adults. Fantastic stuff, a wide range of it. Bonnets, cute little sundresses, Doctor Dentons, adult-sized baby shoes, the whole nine yards—it’s all available.

Upon my discovery of this couture, I immediately envisioned a gang of skinheads in baby drag terrorizing the Wall Street area with random brutal attacks, leaping out of vans dressed as big babies and licking the bloody shit out of random yuppies. I figured that after a few of these attacks, the New York Post would be all about the Big Baby Gang. In 1997, this was a funny idea to me, surreal. If it happened today, nobody would bat an eye.

I met my first practitioner of Infantilism at a birthday party for a rather notorious professional dominatrix from New Jersey, held in a Chelsea loft. I’m strolling around fairly stoned, drinking free beer, watching the slaves get tortured and avoiding the catering. I see this scrawny old guy sitting in a leather-and-chains fist-fucking sling, swinging back and forth like a child. He’s drinking from a baby bottle. From the color of the liquid, I figured it was whiskey. He’s dressed like a baby girl, bonnet and all. Cute baby shoes, probably a man’s size 11. I couldn’t resist meeting this guy. I strolled up to the sling.

“Hi there! I’m Al. Wanna smoke a joint?” He looked like Jeremy Irons up close. The dissonance was extreme. It was whiskey; I could smell it. In a slurred French accent, he replied, “I thought you’d never ask. I am Andre. I am from Switzerland! Zurich!”

He was wearing little frilly socks and swung his feet back and forth in the air as we smoked, occasionally sipping at his bottle. As we finished the joint, he began a drunken critique of the various women in the room, their physical flaws, their private compulsions, their ruined relationships. He moved on to the slaves restrained in various ways around the loft, almost entirely male, providing a thorough psychoanalysis of each, along with a full curriculum vitae, his accent gradually thickening as the alcohol took greater hold, the slur becoming more pronounced. Eventually, I could no longer understand him. I left him swinging drunkenly back and forth, kicking his feet out. He might have been singing “Lili Marlene,” or I might have imagined that.

I wonder when the Big Baby crowd will come out of the closet and live the dream, dressing that way all the time. I hope it’s soon. I want to hear the Born Again crowd condemning babies. I can’t wait. The 21st century is fabulous!