You don't want that knock but, if it comes, prepare for the worst. 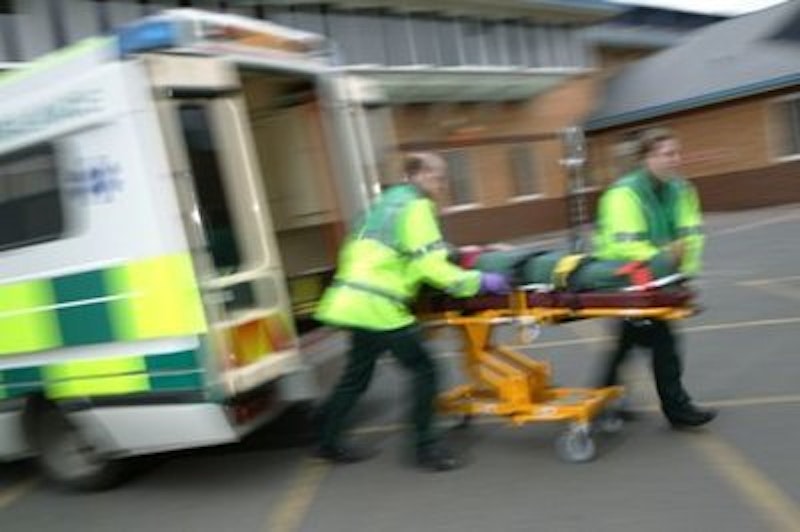 The knock on my front door came at about three a.m., which is never a good thing at that hour. Nothing is happening at three, certainly no reasons to wake someone up. There are normally exceptions to any blanket statement like this one, but this is a hard and fast rule of life. When that knock comes (and I hope it doesn't) things will go downhill fast. Let's call it the "3:00 AM knock dictum." Everyone knows this, instinctively.

There had been a fainter, more tentative knock about a half an hour earlier that I half-heard and probably thought was in a dream. That knock was almost apologetic  ("You don't really have to wake up for this, but I kind of hope you do") but this one was not. It was Jills, my neighbor Mike's girlfriend. When I opened the door, Jills told me that there was an emergency with Mike and she ran back into Mike's house.

Walking quickly through his front door and upstairs to his bedroom, I saw Mike sitting naked on the bed, Jills standing next to him. There was what appeared to be about two quarts of freshly spilled blood on the floor beside him. Mike held a makeshift compress to an open wound on his forearm. Blood was slipping out of the sides of the compress. The wound appeared to be very large, as the quantity of spilled blood attested. One pane of the French doors at the entrance to the bedroom was shattered, and shards of glass mixed with Mike's blood on the floor, forming a gruesome tableau. Mike had a look on his face that could only be described as one of stoic acceptance, and he said nothing. He never said one word that night.

Mike was a friend in the way many neighbors are friends. We happened to live near each other and got on well enough. We’d had a few beers together once on one of our front porches and even dined together at the local Italian place. That was about the extent of our socializing. Otherwise it was mostly quick, friendly chats when we happened to run into each other. Typical neighbor stuff.

I did get a glimpse of another—troubling—side of my neighbor after running into him at a bar once during the World Cup. He drank shots of whiskey with beer chasers throughout the afternoon game. I don't think he waited to finish his beers before ordering another shot, and it went on like that for the entire game. At one point he stood up from his barstool and fell flat on his ass, whacking his head on the table behind him before hitting the floor. I got mad at the bartender and told him he better make sure Mike was not driving home after pouring him so much booze. The next morning Mike called to thank me for driving him home, but I’d walked to the bar on that particular day.

Mike lost his driver's license in his early 20s after a couple of DUI arrests. Now at the age of 28, he told me on his front porch one night, he’d finally gotten his license back. He bought a car and was excited about driving again. Maybe he was getting his act together, I thought. He still drank, of course, but I figured he wouldn't combine it with driving this time. Jail time, plus a few more years alive, can make you a little more sensible. Not being able to drive for six years certainly also affords one ample time for meditation on the hazards of getting behind the wheel after an evening of heavy boozing. But this wasn’t the case for Mike. For him, apparently, important life lessons come at an even higher price than the very steep one he had already paid for his earlier transgressions.

On the night of "the knock," Mike had been downtown, drinking himself into a blackout stupor and then driving the six miles back to his house. Parking in front of the house, he walked inside, leaving his headlights on. The previous night, I learned later, he’d pretty much done the same thing. Returning home from that evening's binge, his parallel parking resembled a pinball game as he caromed off the bumpers of the cars in front and back of him.

On this second evening of heavy drinking Mike stumbled into his house and didn't waste much time getting heavy with Jills.  After warming up with some preliminary verbal abuse he dragged her down the stairs and tried to push her out the front door. It was when she escaped his clutches on the porch that Jills came to my house and gave that first, half-hearted knock. She'd dealt with this many times before so I'm thinking she knew she could handle this one alone if necessary. When I didn't respond she returned to Mike's house, and shortly thereafter he decided to put his fist through the window.

There appeared to be three tourniquets on Mike's arm when I arrived. Jills, unsure of where to tie them, had secured them both above and below the wounds. The tourniquet on the shoulder side of his arm probably saved his life. The EMS worker who came said Mike could’ve lasted five more minutes without medical care. He had severed two arteries. Somehow, despite her clear thinking with the tourniquets, Jills was unable to collect her thoughts and call 911 before fetching me. When I got to my neighbor's blood-splattered bedroom that morning, Jills asked me what she should do. I told her to call 911 immediately and ask for an ambulance. She's only 22, though I'm not sure that's much of an excuse. Mike, it should be mentioned, never asked either of us to call the ambulance. He sat on his bloodied bed and held the soaked compress to his wound with a mute detachment.

I stood there with Jills after the ambulance left. She wanted to call Mike's parents but he’d lost his phone at some point in the evening, before returning home, and now she had no idea how to get in touch with them. She had the address of his aunt and uncle, and they lived nearby, so we walked over there. I pounded on their door for 15 minutes before giving up. There was nobody home.

Jills and I stood in front of the relatives' house and chatted for awhile. Mike had rage issues, she told me, just like his dad used to. It had ruined his marriage to Mike's mother. His dad had gotten those issues under control though and was happily remarried now. When Mike drank too much his rage surfaced and he took it out on Jills. He wouldn't start fights with men in bars, though. He was a happy, emotional drunk in public, and his rage only emerged behind closed doors. That's where he would carry on the family cycle of abuse. Mike told Jills he wasn’t an alcoholic because he didn’t drink every day. When he did drink he went all out, sprinting to an imaginary finish line that should have been much farther away in his mind. Drinking is an activity best pursued at a leisurely pace. A frantic, hurried approach to drinking robs the experience of much of its subtlety and nuance. It's kind of like bird watching in that sense.

Jills drove to the hospital after we left the relatives' house, inviting me to go with her. Though I felt guilty for making her go alone, I declined. My neighborly duties had been sufficiently discharged by this point. I walked the streets aimlessly, as there was no sleeping after waking up and walking right into that horror show. Jills called me later and said she’d contacted Mike's sister, who was living in Israel, via Facebook. The sister had called Mike's parents, who were now on their way to Richmond from Tennessee. The sister was coming too, all the way from Israel. I got the feeling this had been the day the three of them had all been expecting for some time, though when the bad news finally and inevitably arrived it had probably been about as welcome as a three a.m. knock on their door.

Walking the city streets, I thought about how quickly help had arrived. After Jills called 911, I’d gone outside to wait. There was nothing more I could do, but even though Jills stayed in the bloody room I still felt a pang of guilt for leaving someone who very possibly could be bleeding out right in front of me. I'm not sure how much blood you can lose and still live, but there was an awful lot of blood on that floor. I had to get out of that room. A cop arrived almost immediately, rescuing me from my momentary guilt, and the ambulance came in about another minute. The medics did some emergency work on Mike while he was still in his bed and quickly wheeled him out to the ambulance in a gurney. It was all so efficient and professional. The cop stopped on his way out and told me he didn't have to talk to me then but would later if necessary. I never heard back from him.

Mike returned from the hospital about four days later, and his family soon set him up with a $300/hr. psychiatrist who specialized in "cutters." This psychiatrist was the best around and generally had a two-to-three month waiting list. Mike's local relatives, who are rather prominent in this town, pulled some strings and got him on "the couch" real fast.

Cutters, from a psychiatric point of view, are people who intentionally cut themselves, usually to relieve tension. Mike had a long history of this, his mother told me when I went over to his house one day before he had returned from the hospital. Each time he had upped the ante, doing just a little more damage. This time he’d taken it right to the precipice. Had the ambulance arrived several minutes later, this window punch would have been the self-administered finale to a lengthy cutting career. The ultimate form of relief would’ve been achieved.

I never heard what happened with the psychiatrist but Mike didn't stay with him too long. A couple of weeks later, Jills told me Mike's mom was taking him home to Tennessee and that she was going too. It was a chance to finally bail, but she didn't take it. I talked to Mike a few times in the hospital but only once, quite briefly, after he had returned home. He acknowledged that he had “almost died" and said that he was returning to his hometown to get help. I don't know how much he knew, or remembered, about the events of that night, although I was assuming Jills had supplied some details. Mike never even said anything about me being there that evening, or getting the ambulance called or going over to his relatives' house.

I wasn't looking for credit for doing something as automatic as calling 911 (well, maybe a little), but an objective examination of the situation would likely conclude that if I hadn't been there that night he probably would’ve died. He had a five-minute window for the medics to arrive, after all. I’d assumed there would be some sort of acknowledgment. I thought that's what happens in these situations. The conversation was awkward and incomplete. It fizzled out so I just walked away without even attempting a left-handed handshake. Mike said he'd be in touch, but he won't be. He never said so much as "thanks" either. That takes us right back to the three a.m. knock dictum. You don't want that knock but, if it comes, prepare for the worst.