The homeless people of Memphis want your beer... 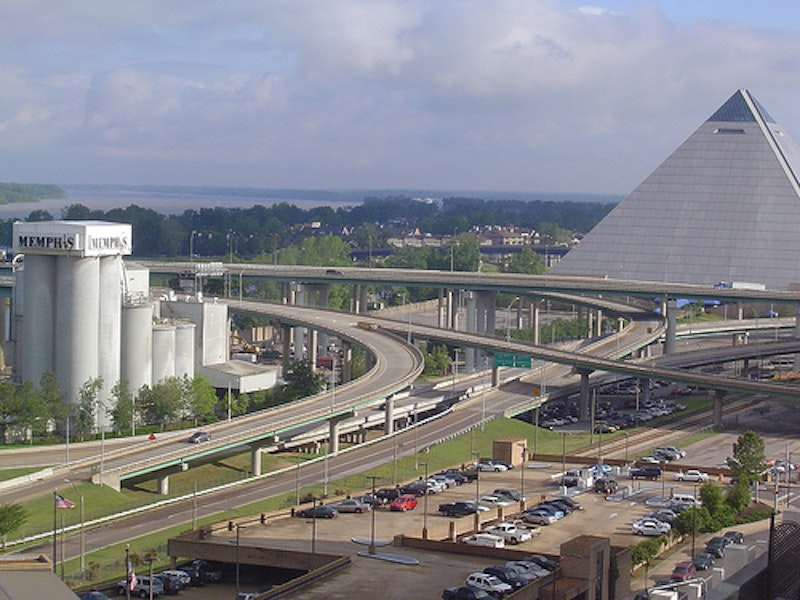 Stu and I gunned it out of our comfortable Texas bubble in the early morning, an old Black Keys album drowning out the sound of the two howling cats caged up in the backseat. We sipped coffee, spat sunflower seeds out the side windows, and sifted through the stack of 20 mix CDs I had made the night before. We were heading for Memphis, our first stop on the three-day road trip to Bethesda, Maryland. It was too early for words and as I waited for the caffeine to kick in, I stared out the car window, taking in the last hours of Texas scenery: endless green fields, vacant highways, and rusted green signs for towns whose populations were smaller than my graduating high school class.

Following my father’s advice, we stopped for lunch at a run-down diner in Texarkana and for about five dollars apiece we ate two giant greasy burgers, a plate of fried green tomatoes, and had a half-hour conversation with the owner, who seemed pleased to pull up a barstool and ramble on about the town. After taking touristy photos from both sides of the border at the world-famous Texarkana Post Office, we headed north, watching the last bit of Texas fade away in the rear-view mirror.

Texas had been a truly pleasant experience, but I knew from the outset that we were now embarking on a very different journey. If I’d done research beforehand, I would have realized that we were heading into the second most dangerous city in America. Unfortunately, all I knew about Memphis at the time was that it was known for blues and dry-rub barbecue, and I didn’t learn about the crime rate until days later.

We made it to the outskirts of Memphis in about 10 hours. By that time, Lightnin’ Hopkins was up in the rotation and the sun was just starting to set on the Mississippi River, painting the entire landscape in pink and blue. We passed horse-drawn carriages emblazoned with bright lights and gold trim, and by the time we arrived at the hotel, Memphis had made a pretty good first impression. One hour later, that naïve idealism faded completely.

While Stu was unpacking his bags and taking care of the cats, I wandered off to find a few beers to drink while we watched the Cavaliers game. I discovered a dive bar down the street that doubled as a tattoo parlor, and the owner pointed one inked arm in the direction of the nearest convenience store. The path between our beer and me was about a quarter-mile of seemingly empty, unlit streets lined with the remains of abandoned, boarded-up apartment buildings. Subsequently, I learned about the relentlessness of Memphis panhandlers.

In Baltimore, I am asked for spare change on a daily basis. I know most of the tricks and see the same familiar faces with the same convenient problems. I know the cons and how to keep money in my wallet. But Memphis was foreign territory. When the first panhandler approached, I had no idea if I was going to be stabbed, shot, or simply left alone. I nervously forked over a couple of bucks but instead of offering thanks and moving along, he followed me for two blocks, pleading for more. After reaching the convenience store, I noticed another man staring at me through the glass front door. He was soon right by my side, telling his family history and asking for money. I gave him my last dollar, but he wasn’t satisfied and to be honest, in those dark, empty Memphis streets, I was terrified. So I gave him a beer, gave another to the man who came running across the street, and walked quickly back to the hotel to finish what we referred to as “our Memphis 10-pack.”

The rest of our night went on without a hitch. We stayed within the safe, tourist trap of Beale St., heard some great music, ran up some hefty tabs and called it a night around closing time. At about one in the morning, however, something strange happened. I still don’t know if it was fatigue from the long day of driving, youthful stupidity, or the recklessness that comes when you’re miles from home, but something caused us to hop in a car with a stranger and hitch a ride back to the hotel. In Memphis, this probably wasn’t the smartest idea, but we lucked out, made it back alive, and the following day (after a brief stop in Graceland) we were off to visit a friend in Nashville.

Nashville was a nice decrescendo after the mayhem of Memphis, and an almost polar opposite city. We drove through the outer region of the city for about an hour, past rolling ranches and green hills studded with the mansions of country music stars. We toured around downtown for a little bit, pausing the radio to hear the music boxes play in the street, but as night rolled around we were both too tired to do anything but split a hookah with our friend Jon at a diner near Vanderbilt.

We rolled into Bethesda around midnight and I thought about what I had seen, and my initial hopes of gaining some understanding of “The South.” I put those words in quotation marks because from what I saw, this idea of the south seems to exist only as a vague source of identity for certain people. I had experienced the South through a clichéd tourist’s perspective. I listened to blues thinking it was true Southern music, but our friend in Nashville listened to Taylor Swift. Just like everyone else.

Perhaps there once was a unifying set of characteristics that defined the massive region between the Mason-Dixon Line and the Texas border, and maybe that’s what real “Southerners” are trying to hold on to. But that’s the stuff of spaghetti westerns and Faulkner novels, and it’s certainly no longer the norm. I can’t imagine that any real widespread homogeneity exists from state to state or even town to town, and I’m glad I discovered that. If that weren’t the case, our journey would have been far less interesting. Every worthwhile road trip needs a few surprises around the corner.