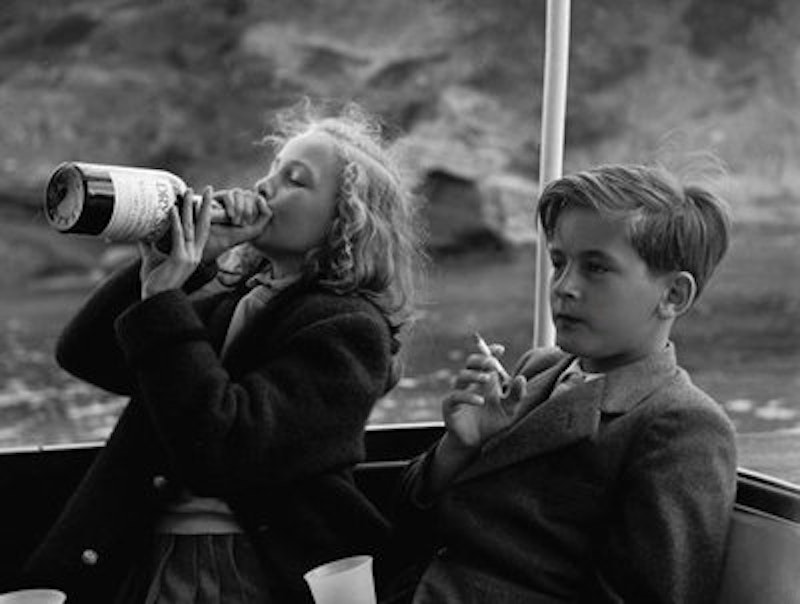 The gray area between adolescence and adulthood is fuzzy depending on which side of the age gap you happen to be at the time. Whether you’re a kid trying to act like an adult or a grown-up trying to act like a teenager it looks out of place. For me it began at the age of 12 with a ceremony known as confirmation. A Catholic rite of passage when one becomes an adult in the church. There’s a formal ritual involving anointment by a bishop of the church who makes the sign of the cross on your forehead with a greasy scented balm oil. A confirmation name is given to go along with your middle name. These names are chosen from a limited list of saints and the original 12 apostles. Mine was Joseph. He was the patron saint of workers. Joseph was a carpenter and the husband of the virgin Mary who gave birth to Jesus through immaculate conception.

My uncle Joe was my sponsor at confirmation. Like a godfather without the responsibility. I really liked my Uncle Joe. He was a trucker who loved to laugh, drink beer and eat crabs. He’d eat raw onions like apples. He swore they kept him healthy and free of winter colds. I guess that’s because it kept everybody at a safe distance from germs. Because of his onion breath nobody would get close enough to infect him. He stood behind me during the “blessing” and afterward there was a big party at our house with all the relatives in attendance. I received congratulation cards with cash inside. I thought this meant something. This was important. I was finally free of the tyranny of church.

In the 1960s the church emphasized being fruitful and multiplying like rabbits. My mother, who had three of us plus a few miscarriages, was done popping out babies. The local parish priest scolded her for not wanting more offspring. She questioned the priest, “What do you know about having kids, do you have any?” After that day my mom never went to church again and she didn’t make any of us kids go after we became adults of the church. She told us if you’re an adult of the church then you have a right to choose if you want to go there or not. I said hell no. For me it was a relief after years of creepy sanctimonious hypocritical bullshit. All that mysterious double talk Latin mumbo jumbo and a promise of eternal damnation for committing sins that put the fear of god in you. I figured I’d risk it all and take my chances. It was not that rare then considering the advent of folk mass. A priest with a guitar would sing folk songs to young kids. It was peace and love youth-oriented progressive tripe in a smoke and mirrors sinister way.

At 16 I got my driver’s license but couldn’t afford a car. At 18 you had to sign up for the draft and it was also the legal age to drink alcohol and register to vote. I reckon lawmakers argued if you were old enough to fight and die in a stupid war then you a had a right to do other things that may be considered stupid like drinking alcohol and voting. I’d taken up drinking years before but have never voted. Now I could go into any liquor store and buy my favorite adult beverage. Which at that time was beer. Before that we drank Boone’s Farm strawberry or apple wine that was nothing more than a sickening sweet concoction. But at a buck a bottle the price was right. We also raided the club basement bars and liquor cabinets of our affluent friends. Drinking was a grown-up activity. It went along with smoking cigarettes. It was socially acceptable to drink and smoke all the time. I didn’t start hanging out in bars regularly until my freshman year of college. By then it was just part of living the modern world.

Becoming a responsible adult isn’t about age. It’s more about the little victories and huge defeats. It’s about surviving the madness and knowing the difference between good and bad. Evil is a force we must all reckon with and reject for a sane and healthy life. Right and wrong were first taught to us at home. Our parents were once innocent children doing childish things. To avoid the fear of punishment or threats of violence we became skilled liars by not squealing or snitching. Squeaking by in the hierarchy of adolescence. We had to maneuver our way through bullies, avoid the police, and steer clear of neighborhood gangs, turf wars and strange rites of passage from puberty to teenage angst.

We learned how to become productive obedient members of society and eventually evolve into efficient workers to pay bills. Our childlike innocence was lost. It might have something to do with a 40-hour work week for a minimum slave wage income or attending church every Sunday. We don’t want to grow up. Like Neverland and Peter Pan, a Victorian fairytale make-believe world where Tom Waits and The Ramones sing at Toys R Us, “I don’t wanna grow up!”  We lost sight of our individualism. Going through the motions of the daily grind following the herd. We are naive to believe in the wild wanton abandon of youth. There’s no glory in the blinking TV eye we gaze into. A digital reproduction of us with a caption that reads “Have You Seen This Child?” Like it or not, we’re all grown up with nowhere to go.