Lose your little spot in this ocean, and it’s like you’re gone forever. 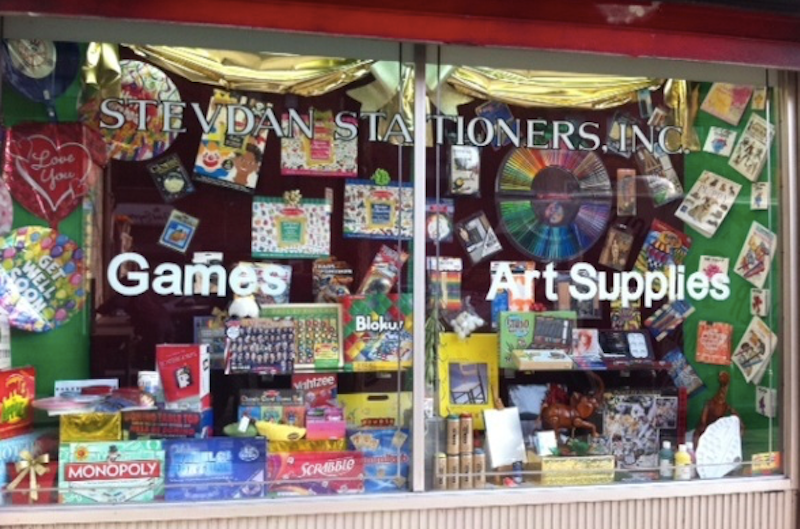 Stevdan Stationers in Manhattan’s West Village was one of the few such stores of its kind not to collapse with the coming of Staples. A guy named Stan started the business when moms and pops like him ruled the niche. That was in the early-1960s. Stan came up with the name of the store by combining the names of his sons, Steve and Dan. Steve eventually ran the show, but not for long. According to a business acquaintance, he’s now down Virginia way and doing nicely there with a couple of Party City stores. The word on Dan from this same source has him working as a doctor somewhere.

Steve sold out in ’95 to Ejaz Chaudhry, a transplant from Pakistan. Under Ejaz the store plugs on as Stevdan Stationers, though not where it was. In 2017—after years of friction with his landlord—Ejaz moved locations, lured by the promise of easier terms. He didn’t have far to go, as it happens. A walk across the street was all—from 474 on the east side of 6th Ave. to 473 on the west side of 6th. The two doors practically mirror each other across the one-way, northbound traffic. Merchants dream of moves like this, where one has merely to follow one’s nose to find them again in the city.

Since then, Ejaz sometimes wonders if switching ships was the right decision. The building owner who lured him over wound up dying after he’d moved, leaving Ejaz at the mercy of the building’s new owner. The favorable terms he enjoyed at the outset are suddenly not so favorable. Another issue is visibility—in retail lingo it’s called exposure. Next door to Ejaz is H&H Grocery, whose entrance is fronted by two wooden stands—the left one for flowers, the right one for produce. For those pedestrians trudging north past the tiny grocery followed by the stationery it’s easy to miss the latter store, thanks to both those jutting stands. “They don’t even see me,” Ejaz complains.

With time he’s come to question his assumption that his loyal base from across the street would find his new place readily enough. It’s been four years since he made the jump, and even now they trickle in with a look of consternation on their faces. “We didn’t know you were here,” they tell him. “When did you move?”

Ejaz is no longer surprised when he hears this, and he’s come to see the difficulty as more than just poor exposure. Somehow it’s also the city itself—the hurly-burly, the welter of shops. Lose your little spot in this ocean, and it’s like you’re gone forever.

It didn’t help when Ejaz’s old spot was taken over by a rival stationer. It’s even worse than that. The guy who took it over named it—get this—Steven Stationers, thank you very much. Before that, the same guy had a store called Downtown Stationers just up the street. But one day, there he was in the spot left free when Stevdan vacated, and so was born Steven Stationers.

And so began this odd face-off: on one side of 6th Ave., Stevdan Stationers; directly opposite, the upstart Steven. The latter even went so far as to dress his front window with a half-dozen boxes of 1000-piece jigsaw puzzles. It seemed an odd choice until one remembered that this same window, when Stevdan’s had it, was known to display the very same item—jigsaw puzzles of 1000 pieces. Indeed, these puzzles can still be seen in the window lately claimed by Ejaz.

One of Stevdan’s regular customers stopped by recently on a quiet day. A tall, thin, gray-haired gent lugging a canvas shoulder bag. “Hello, my friend,” he called to Khalid, the boss’ trusted righthand man. Khalid was sitting high on a stool with folded arms behind the showcase. The customer, moving past him, headed down the right aisle without breaking stride, like an old hand. He always got the same thing, and a moment later he brought it up—a 50-sheet, 9ʺ-by-12ʺ Borden & Riley newsprint notepad.

“You know why I love this brand?” he asked as Khalid dropped down to his feet from the stool. “It’s all about the binding, my friend. The pages stay glued together, even after you curl them back. I’ll need some Cross pen refills as well. You got a pack of medium blacks?”

Khalid pulled out a pack from the drawer of a filing cabinet behind the counter. As he rang up the sale, the gray-haired man flicked his head in the direction of the window. “I see your neighbor across the street calls himself Steven. That’s not nice,” he added in the voice of a schoolmarm scolding a naughty child. The line set Khalid laughing, and the man said it again, to the other one’s continuing mirth. Now on a roll, the man went on: “Watch, his brother will open next door to him another stationery and call it Dan’s.” Khalid guffawed.

On walking out with his purchases, the man suddenly had an idea, and a minute later he’d crossed the street and was standing in front of the rival store. He’d never studied the window before, and now as he looked it over, he was struck by its shabby state of neglect. Objects had fallen and were lying in a heap at the bottom of the window, against the glass. Pens, greeting cards, picture frames, paint sets. And sprinkled over some of these objects (in certain cases more than sprinkled) was a flaky white substance that looked like plaster—unless it was a poor imitation of snowflakes, as part of the decorating run-up to Christmas. Higher up, on the glass itself, in crude black duct tape, were block letters spelling out Steven Stationers. Only it wasn’t quite like that. The “n” in Steven had peeled away, leaving a ghost of itself in its place.

The gray-haired man found it interesting that the owner had let his window go. Somehow it seemed fitting to the man. The owner’s shabbiness was all of a piece—his shabby treatment of his neighbor opposite, and the shabby state of his front window. One could state it as a law: aesthetics reflected a level of ethics.

The door to the shop was propped open, and the man walked in. And now for the first time, as he paused on the threshold, he saw at once the space had shrunk to half its former width. The store was empty of people except for the owner, who stood behind the front counter in an attitude of boredom, his head at an angle and resting on his hand. He raised it now at the sight of the man, who asked: “Is this Stevdan?”

“Yes,” said the owner, now at full height. “Is there something in particular I can help you with?”