Selling Out, or Buying In

There is something comforting in giving up your autonomy. 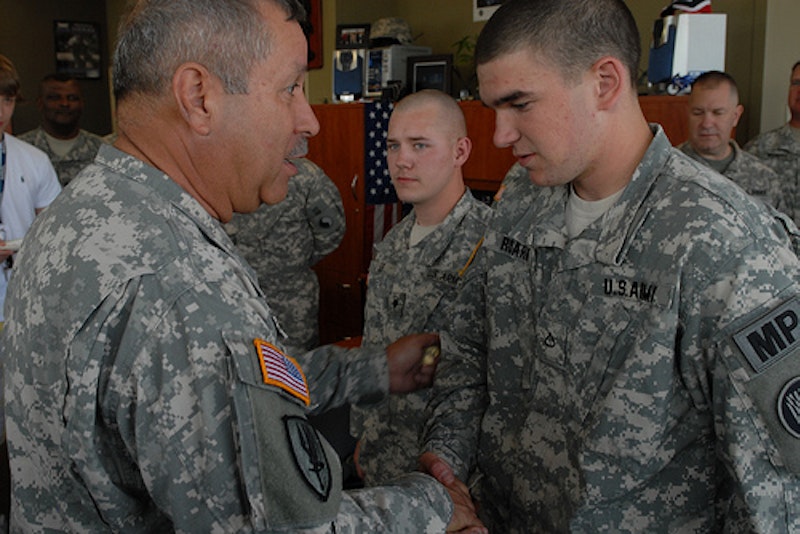 Even though enlisting in the military is about as likely as that time five minutes ago when Sean Penn friended me on Facebook, I accompanied my best friend Small Fry to a military recruiting office yesterday, mostly to make sure that she didn’t sign anything. It was an unexpected way to spend an afternoon: we don’t look like the kind of people who’d join the military. We look like the kind of people who put nutritional yeast on popcorn or talk shit about people who put nutritional yeast on popcorn but still kind of like it. Besides, both of us fundamentally disagree with not just American military policies but also with the idea of the military itself. Besides, neither of us is strong enough to carry our own groceries, much less canteens and ammo.

The recruiters’ office itself wasn’t what I expected. When we walked in, there was no one to welcome us with stars and stripes and songs. Instead, we wandered around until we came across the Air Force recruiters. They didn’t talk about the Army of One or the soul of camaraderie or the honor in fighting for your country after that big September thing. They just handed us forms to fill out and left us alone.

Although I might have given them my sister’s social security number and an ex’s phone number, I was mostly honest on the paperwork. Have I been arrested? Yes, but it was just a misunderstanding and the charges were dismissed after I gave the judge a backrub. Part of the paperwork involves listing all the drugs you’ve done and the number of times you’ve done them. If I actually wanted to earn my pilot’s wings, I would have lied, but because I was more interested on leaving before happy hour than being fitted for a uniform, I was honest. It’s not like I’ve ever traded my body for a crack pebble or anything, but I went to college. I wore Birkenstocks and rolled one-handed joints on the way to school. That’s what I told the military recruiter. Look, brother, there’s nothing wrong with smoking a few trees. It’s Of The Earth, my friend. He looked at me like I was John Waters trying to get into the police academy and said he didn’t think the Air Force was an appropriate fit.

When Small Fry first told me that she was thinking about joining the military, I changed the subject (Look! Boobs!) and waited for her to put this terrible idea to bed. But she didn’t. She talked about detonating bombs and wearing a tailored uniform and never cooking again. She made her hands into guns and shot everyone who walked by our house. I need discipline, she said. This will make me grow up. Her thinking is stupid, like waiting for your power to get cut off because then you’ll be forced to start paying your bill on time. And yet, I get it. There is no discipline in our home. Small Fry and I live in a tree house world. We create imaginary futures for ourselves. We’re going to move to San Francisco and live in bunk beds and have a bunny that hops behind us everywhere we go or maybe a fairy who hovers by our shoulders. Or maybe someone will recognize our commercial appeal and pay us just to be ourselves: two nearing-30 girls who walk around wearing eye patches and gypsy masks, getting up every once in a while to practice chest-bumping before resuming our Facebook sentry. That’s what we need: someone to find us and love us and give us a reality TV show. But the older we get, the more we realize that we are passing the age when it’s acceptable to walk around town barefoot with our pants rolled up because we feel like playing Tom and Huck.

After being told that I was not an adequate candidate for the Armed Services, I left Small Fry with the recruiter and wandered around, thinking about what do to now that this option that was never really an option isn’t ever going to be an option. Med school? Teaching English in Korea until the economy recovers and we can get back to the lives we think we deserve: comfortable lives, exciting lives, full lives, mornings that don’t start with trying to think of a reason to get out of bed, not finding one, and closing the blinds and dreaming for a few more hours. At the recruitment center, I saw people signing papers because they want to or because they have to. Some were excited, I’m sure, others scared. These young men and women were making real decisions, decisions that will influence the course of their lives.

Small Fry didn’t sign any papers, and, in fact, was never going to. This was just another option for us to dismiss. At least, we tell ourselves, we are trying. Out of school, underemployed, dreams of the future quickly dissolving—that’s where the military comes in. Do their push-ups, make their beds, polish their doorknobs, call them sir and write your girl back home. There is solace is giving up your autonomy. I understand this, and part of me wishes I could get over my ethical reservations and unwillingness to take orders and my past life as a stoner and my unshakable belief that things will work out, maybe not for everyone, but for me. Because what if it doesn’t? What if this is all there is---looking for a path to adulthood, wondering if you should put you fate in the hands of others. Maybe we all want to sacrifice our autonomy, not to an organization run on unthinking obedience, but to a fate we think we deserve.