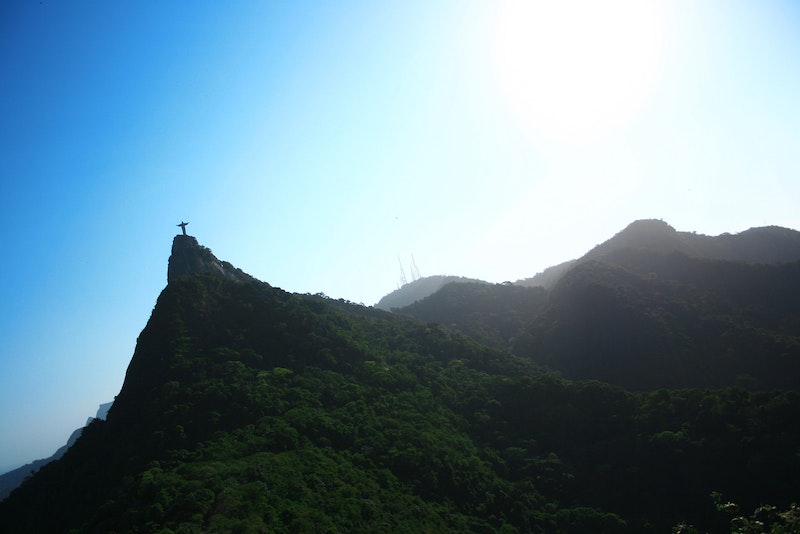 I could tell that I was going to like Rio.

“Do you guys want a beer?” Fabiano asked, weaving his car effortlessly through the congested traffic of the highway that led to downtown Rio de Janeiro. This was the tail end of what had seemed like a day-long plane ride. The abysmal airline food, expensive coffee and three-hour delay in a Miami airport full of screaming, frustrated Brazilians all seemed to blend together into one long, sleepless haze and I didn’t quite feel like a functional human being.

But it was past noon in Brazil and so of course I was going to have a beer. I was picturing drinking it by some fantasy beachside café when Fabiano thrust a wad of bills into my hand and urged me to give them to the shirtless man racing alongside our car with a cooler. I made the exchange and as I began my vacation with that first sip in the back of the Isuzu Jeep, I looked out the window to see a three-story Jesus staring down at me from a mountaintop.

Fabiano was a family friend from my small hometown in eastern Maryland. He had moved from his home in Brazil to study photography in the States and after he graduated my mother sold him the property that he eventually turned into “Traces of Us,” a successful photography gallery. They quickly became close friends and she would often co-host events and classes at the gallery, gathering together the small but talented group of serious photographers who populated my town. But Easton was too small for Fabiano’s vision. He shot complex, abstract photos and nudes, and was operating in a town that shut down for one week a year to celebrate ducks, geese and camouflage jackets in a ritual called “The Waterfowl Festival,” a strange tradition I never quite understood. In time, Fabiano closed down the gallery and opened up a new one in the Laranjeiras District of his hometown Rio. This humble but vibrant spot was where my mother and I were to call home for a week, and it certainly beat staying in a hotel.

Fabiano’s operation in Easton was small given the community, but in Rio his business was booming. I’d wake up each morning to find new faces in the backyard patio area: writers looking for cover art for their magazines, actresses and directors setting up for that night’s play, or people who had just stopped by for coffee and breakfast.

The mornings were generally casual, which is why I was caught completely off guard the morning Brazil played the Netherlands in the World Cup. We made it to Copacabana Beach about an hour before the game and the surrounding streets were already packed with howling fans. The vuvuzelas were buzzing and the white sands of the beach completely hidden by a teeming mass of green and gold which stretched all the way to the water.

That day on Copacabana Beach was when I realized that no matter how many World Cups America would win in the future (if any) the sport could never reach this level in the United States. The U.S. soccer discussion has been beaten to the ground by commentators and sportswriters, all of whom seem to neglect the fact that there’s a huge difference between casually watching and following a sport and taking a day off work to catch a game. Back in Washington, DC, I had almost been denied a visa because the Brazilian consulate was shut down for one of Brazil’s first-round games. At the time, I had thought that the idea of shuttering a government facility for a soccer game was absurd and pounded on the door and kicked up a fuss until my visa was delivered to me. After witnessing a match from the white sands of Rio, it suddenly made sense. The entire city had been shut down and thousands of people, most of whom probably had jobs, had taken the day off to watch a game … and this was completely normal.

The rest of the week passed in a blur. We ate at a Brazilian barbecue restaurant, experienced the night life in the Lapa District, and witnessed one of the plays for which Fabiano’s gallery was best known in which the audience traveled with the actors through the gallery. Not knowing more than three words of Portuguese, all I can recall of the production was that at some point a baby doll was chopped into pieces for a soup, which was apparently funny because I was the only one not laughing.

I spent my last night in Rio at the gallery, drinking cachaca out of oak glasses and failing at picking out bits and pieces of the conversation. That was the night I met Teresa, a beautiful young woman who spoke English quite well. Taking advantage of the opportunity, I tried to learn as much as I could about what it was like growing up a country that was still incredibly foreign to me. She was a part of the first generation of adults to have voting rights in Brazil and we discussed her political advocacy in college, her love of President Lula, and the oppression her parents had experienced when they were young. She was the end-result of decades of dictatorships, coups, military rule and bloodshed in the streets. A simple question such as “Did you vote in the last election?” which would have been perfectly normal in the States, wasn’t a question at all in Brazil.

Teresa worked for a public relations firm in Rio, but spoke about politics with the excitement that I’d previously found only among some activists at college. Moreover, this intense political engagement among the Brazilian people was coupled with a relaxed, almost carefree way of life and sexual freedom that I had only read about in stories of San Francisco’s Haight-Ashbury in the 1960s. These people seemed to have achieved that elusive work-life balance, getting their jobs done while always making time for a beer (or three) on the beach. The best example I can summon came moments before we headed to the airport, as Carlos (one of our roommates for the week) was taking a break from his studies to carve wooden stoppers for his bed frame so it would make less noise during sex.

Needless to say, it was a rough transition coming back to D.C., a city that I’m quickly learning is populated almost exclusively by clean-cut faces in suits, all of whom seem to resemble the adult versions of the cocky snobs I had come to despise in my political science classes at school. It could be that the cultural transition was too abrupt so I had no choice but to resent it, or maybe I’m still blinded by the euphoria of vacation. Either way, I made Fabiano and Teresa a promise to return, one that I’ll definitely keep.