Away, then, with the jelly creatures!

Kierkegaard's Fear and Trembling, and why Puritans hate art. 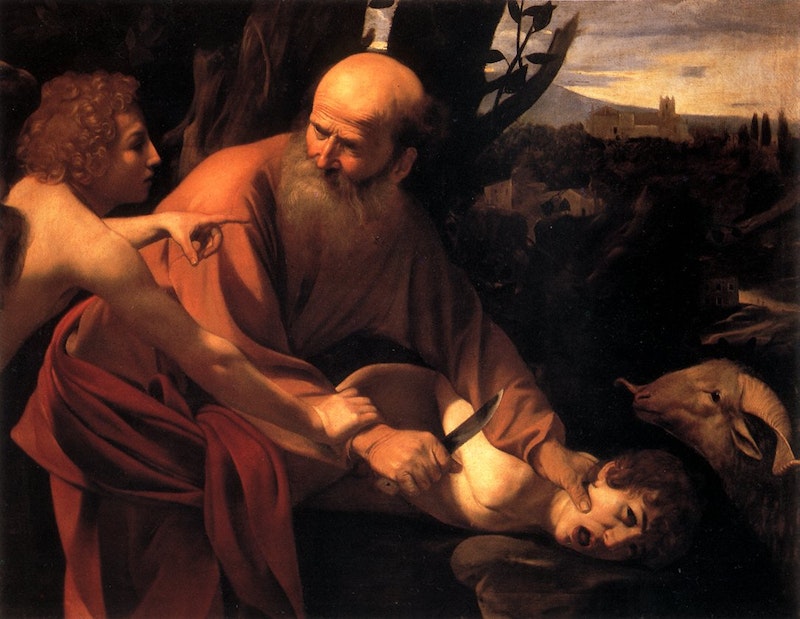 Protestants hate art. Whether it’s a 16th century Puritan putting his foot through stained glass or Jesse Helms brutally consuming a gardenful of pretty flowers salted with NEA grants, Martin Luther’s fecund and contrary offspring can be relied upon for dyspeptic philistinism. What started as a hatred of jeweled miters and extravagant Pope hats has come, centuries later, to mean a mistrust of nipple eruptions and a generalized wish that artists would just hurry up and starve in the street already—or, failing that, that the public would feel mildly guilty for watching television.

In Fear and Trembling, that well-known dead Protestant Søren Kierkegaard does his part for the advancement of iconoclasm. Throughout the book he contrasts faith, ethics and aesthetics—and it’s always aesthetics found wanting.

Faith therefore is not an aesthetic emotion but something far higher, precisely because it has resignation as its presupposition; it is not an immediate instinct of the heart, but is the paradox of life and existence.

Aesthetics is a respectful and sentimental discipline which knows more ways of fixing things than any assistant house manager […] .But ethics knows nothing of this coincidence or this sentimentality. […] You can’t argue with ethics because it uses pure categories. It doesn’t appeal to experience, which of all laughable things is perhaps the most laughable and, far from making a man wise, if he knows nothing higher it will soon make him mad. Ethics has no coincidence, so no explanations follow… It enjoins the belief in reality and the courage to contend with all its tribulations […].

For Kierkegaard, then, faith and ethics are higher than aesthetics because they lack aesthetics’ sentimentality. Aesthetics is pie-in-the-sky nonsense; palliative daydreams for those with insufficient force of mind. Ethics acknowledges the hard truths of reality; faith (Kierkegaard argues throughout the book) goes beyond reality to paradox. Both outstrip aesthetics, which merely substitutes personal emotion and desire for hard truth. Rock‘n’roll is the opiate of the morally and religiously stunted.

The problem, though, is that even as he denigrates the aesthetic, Kierkegaard is clearly possessed by it. Fear and Trembling is, in fact, structured not as an argument, but as a story with variations. The book is obsessed with the story of Abraham and Isaac, which it tells and retells from different perspectives and different vantages. In one version Abraham lies to Isaac, insisting to his son that he sacrifices him because he feels like it, not because God commanded it, because he does not want Isaac to lose faith in the Lord. In another Abraham gives in to despair after Isaac is saved; in another it is Isaac who loses faith. And then Kierkegaard spins out analogous stories and comparable situations: Agamemnon ordered to sacrifice Iphigenia; L. Junius Brutus executing his sons; Faust bargaining for his soul. Ethics and faith may be above aesthetics, but it seems that it is only through aesthetics that Kierkegaard can approach the higher values or think about them. We only know God through stories.

Kierkegaard is aware of this difficulty, and tries to resolve it in various ways. Most notably, he spends a lot of time arguing that Abraham’s commitment to faith puts him beyond communication. “Abraham cannot speak. What would explain everything […] is something he cannot say.” The story of Abraham is no story, beyond language. For Kierkegaard, the mystery of faith is precisely its isolation. The ethical is a universal law; everybody understands “Thou shalt not kill.” But God’s voice in his heart, “Abraham, you must murder your son,” is private and incomprehensible. It cannot be told, which puts it outside ethics, and also outside the telling and retelling that is part of aesthetics.

But, of course, a story in which Abraham can’t tell his story is still a story. And, in fact, the very function of aesthetics is to bridge the universal and the particular. The ethical speaks to all, faith speaks to one, but how can the one tell his story to all, or the all tell its story to one, except, precisely, through a story? Kierkegaard tries to push aesthetics off to the side to deal with ethics and faith, but as soon as he turns his back, aesthetics expands like some sort of sci-fi jelly-creature and swallows him up, ethics, faith and all.

This shouldn’t be particularly surprising. If there’s one tendency in Protestantism that’s stronger than the loathing of aesthetics, it’s the veneration of the same. The Bible, after all, is a series of tales. Kierkegaard sneers at aesthetics because he takes them so seriously. The problem with stories is not that they’re stories, but rather that they’re not the one story. It’s because he loves the tale of Abraham so elaborately that Kierkegaard denigrates other narratives as sentimental balderdash. Sci-fi jelly creatures attacking—that doesn’t have the terror, the sorrow, the human interest and moral power of Abraham walking to the mountain to slay his son. Away, then, with the jelly creatures! Puritan philistines are just particularly foul-tempered critics; their iconoclasm is just one long bad review.

You could say, then, that Kierkegaard and his Protestant brethren reject the power of art in favor of art as power. That’s one way to see the rise of that very Protestant phenomenon, democracy. Absolute monarchs and Popes are happy to encourage (some kinds) of art, because the robes and the jewels and the masks are just gilding; art is the handmaiden of hierarchy. But for Kierkegaard, Abraham is an icon, and the truth is that icon itself, not any King or Pope who might issue an edict in its name. The greatest good is not the universal command, “Thou shalt obey!”, but inner faith, the private story God speaks in the heart.

Similarly, authority in not inherent in structure, but comes out of the allegiance that can be commanded by art touching us individually—the words of the Constitution, the images on a television screen, the story of a multi-racial child who lived the American dream, or (for the birthers) the story of an un-American plant trying to undermine us from within. Ronald Reagan was an actor; Obama is a writer—our culture loudly proclaims its hatred of aesthetics even as it kneels down before them. Like Kierkegaard, we hate art because we love it so much, standing rapt before it in fear, trembling.