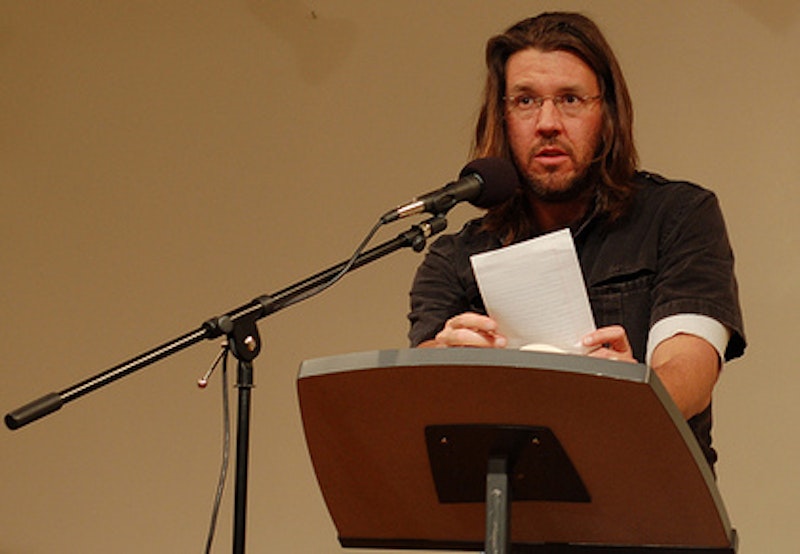 David Foster Wallace, who most readers will know at least by reputation for his 1996 novel Infinite Jest, hanged himself on Friday night in his California home. The news was confirmed to the Los Angeles Times late Saturday night. He was 46.

Infinite Jest is a long, dense black comedy about consumerism and addiction in America, and its wordplay, footnotes, and high intellectualism were indicative of Wallace's general style. That style, which also wrought an earlier novel, three story collections, two books of essays, and a nonfiction history of Georg Cantor and his place in the "discovery" of infinity, had its detractors and its parodists, but no critic discounted Wallace's talent or his place in the ranks of serious literary fiction. He was also arguably the most influential writer of his generation, as evidenced by the outpouring of grief by his contemporaries.

As the obits are already saying, Wallace's historical importance is that, in Infinite Jest, he bridged the postmodern systems novel techniques of John Barth, Thomas Pynchon, and William Gaddis with a distinctly 90s-era secular humanism and surprisingly reader-friendly tone that rejected their reliance on irony. His skeptical thoughts on irony in contemporary literature are available in the essay "E Unibus Plurum," gathered in his 1997 essay collection A Supposedly Fun Thing I'll Never Do Again.

There was a less-heralded trend in Wallace's work, however, most visible in Fun Thing and his other essay collection Consider the Lobster, towards writing that was more intellectually investigative; what these books share is a tone of burrowing philosophical inquiry, a curiosity about the ethical and intellectual implications of even the most mundane things—eating lobster, attending the state fair, John McCain's 2000 presidential campaign, television, tennis, the yearly AVP porn video awards, et al. This desire to somehow see the total complexity of modern life by way of careful cataloging can be seen in his more recent essays about Roger Federer or Jorge Luis Borges (who he tellingly praised for being “a first-rate human mind stripped of all foundations in religious or ideological certainty—a mind turned thus wholly in on itself”), and particularly in his increasingly detail-heavy fiction. "Good People," a story that appeared in The New Yorker last year, was an extraordinarily descriptive rendering of a young couple coming to terms with a pregnancy. Almost devoid of Wallace's trademark linguistic pyrotechnics, the story's power derives from its depth of emotional observation.

None of this biographical or interpretive summing-up can do justice to how immeasurably sad this news is for those of us who read Wallace's work with a mixture of appreciation and awe. His writing contained plenty of references to suicide, loneliness, and the difficulty of human connection, but it also burst with excitement and was always fun. That such a man—acknowledged as one of the great writing talents of his time and the inspiration for fan sites and devotee readings—was not only sad enough to take his own life, but also pained enough to do it in such a tortured, violent, and theatrically antiquated way is positively heartbreaking for those of us who took comfort in his talents and joy from his work. Akin to his searching essay on Federer is the 2005 commencement address he gave at Kenyon College, in which he expresses perhaps the best answer to the stock "What is the value of this education?" question that I've yet encountered. "Twenty years after my own graduation," he writes,

I have come gradually to understand that the liberal arts cliché about teaching you how to think is actually shorthand for a much deeper, more serious idea: learning how to think really means learning how to exercise some control over how and what you think. It means being conscious and aware enough to choose what you pay attention to and to choose how you construct meaning from experience. Because if you cannot exercise this kind of choice in adult life, you will be totally hosed. Think of the old cliché about quote the mind being an excellent servant but a terrible master.


And I submit that this is what the real, no bullshit value of your liberal arts education is supposed to be about: how to keep from going through your comfortable, prosperous, respectable adult life dead, unconscious, a slave to your head and to your natural default setting of being uniquely, completely, imperially alone day in and day out.

In the middle of that quote, in the [...], is a mention of suicide that, like so much of Wallace's work, now takes on an overburdensome value in hindsight. The fact is that no reader will be able to guess the thought process that made him end it all in such a disturbing fashion, and it's reductive to scour the man's work in search of cries for help—that the central character of Infinite Jest kills himself using a microwave, or that in a survey of underrated fiction for Salon he chose two books that to him represent "the all-time best U.S. book[s] about human loneliness," for instance. Regardless of the horrific implications of Wallace's suicide, his writer's voice was still profound for its mixture of penetrating self-awareness and boisterous confidence. Better to go back and read it for its beauty, insight, and technique than to falsely see his great books as extended preludes to a final tragic act.

Personally, I can say that this is as devastated as I can imagine being by the death of a person I never met. I surely speak for many other readers when I say it feels like the rug's been pulled out. One of our time's greatest, most insightful brains was too tortured to endure itself; what could be more unspeakably depressing? I have one incredible memory of Wallace, however, one that casts him in a warm, personal light and which has taken on an unavoidable pathos in light of the recent news.

A lit. survey course during my sophomore year of college required me to read Thomas Hardy's Jude the Obscure, which I hated more than any book I can remember for the author's misanthropy and self-pity. I expressed my dismay, and the professor told me to read Infinite Jest as an anathema to the aspects of Hardy that I found most objectionable. There was a month left in the year, and with exams looming I didn't feel up to the task of a 1100 page book with small print and 400 footnotes. But a slow Saturday afternoon made me curious so I tracked down the book in the library. Within two hours I was hooked, resigned to spend the next month with Wallace’s novel, regardless of other academic or social obligations. It was one of the great reading experiences of my life, without question, and one of the books that helped me realize the full instructional, emotional power of reading. To the extent that any serious reader can have a “favorite” writer or book, Wallace and Infinite Jest became mine within seconds of finishing its gorgeous, hymn-like final scene.

Infinite Jest meant enough to me, in fact, that I wrote Wallace a letter. It was astounding to think that such a novel could be written by a person so young, who was not only still living, but teaching freshman comp classes at Pomona College. Readers don't often get the chance to thank the artists that affect our lives, and I couldn't let such an opportunity be passed up. I told him how I came to his book, how affecting it was to read while in the daily grip of the collegiate party-class-study-party schedule, and I asked him to come speak at my school. A response came shortly thereafter, on the back of a postcard whose front displayed a color photo of two gargoyles identified as "Braying donkey or ass and angry lionlike monster, Strasbourg Cathedral, France."

I enjoyed your generous and literate letter. I think you're a bit hard on Jude, although it is a tenebrous book. Hardy articulates (best, I think, in his poetry) one facet of the jewel, which verily is sad and tortured, at least to many smart people. (Other facets are suffused with immense joy and complexity, of course.)

I read at schools, but only 1 or 2 a year, and my dance card is full till '07. By which time you'll be in the world. Be well, and thanks again—your letter made my day.

That postcard was of course the first thing that came to mind when I read the death notice; that he sent it at all (or even read my letter to begin with) is proof that he wasn't some egomaniacal type but rather a writer who valued the small, unanticipated connections that reading can give us. He was a man who could, for at least one moment, conceive of life as a "jewel... suffused with immense joy and complexity," but if his writing taught us anything, it's that life resists any and all easy categorizations; there is always more understanding to be had, more contradictions and paradoxes churning beneath appearances. To say the least, I did not see this coming. His work was defined by efforts to understand—and in turn to explore the universality of—despair and loneliness. There are no words to mark such a horrible passing, or to sum up what an enormous loss this is for the literary community. We've lost a great one; I hope he found the peace he was looking for.