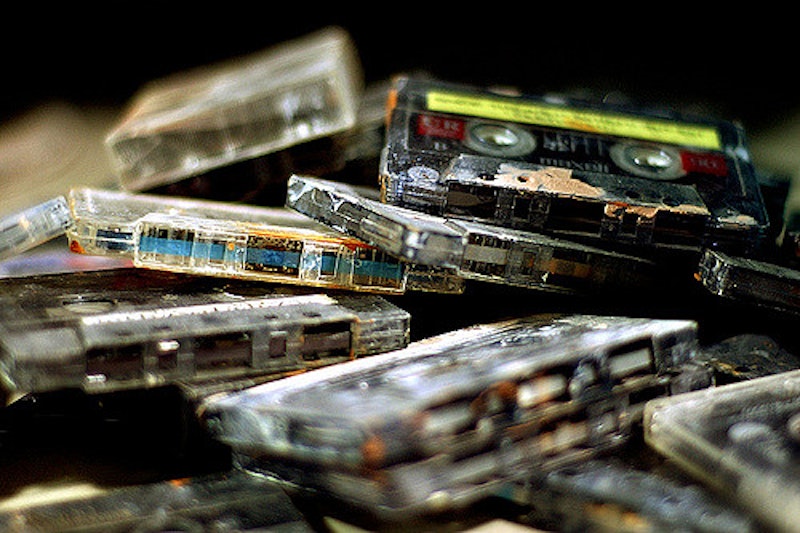 In addition to working as a freelance writer, I am the main contributor for the archival project Towson-Glen Arm Freakouts, which pays tribute to the incredibly strange political art made in suburban Baltimore by the Towson-Glen Arm Movement of the 90s. I was lucky enough to have experienced TGA firsthand. As they might say in the comic books, I now present a two-part Splice Today/Towson-Glen Arm Freakouts crossover. Many names in this piece have been changed, though some real artists are mentioned.

It's safe to say that weirdness ran wild in Towson-Glen Arm's little corner of Maryland. Even by the standards of TGA, however, the surprise 1994 discovery and subsequent distribution of a psychologically damaged spoken word cassette from Glen Arm took weirdness to a previously unknown level. Due to the recording's anomalous content, I've decided that the TGAF blog is just not the right place to recount the unbelievable but true story of this awkward mind melter, an artifact that will forever be remembered as the "Journey Into the Night" tape.

Glen Arm may have been a launch pad for the avant garde explorations of the Towson-Glen Arm crew, but for other young people this unincorporated town near the Loch Raven watershed was just a dull backwater. The only distinctive youth culture there belonged to rural metal heads—teens and college aged folks who mainly found intellectual stimulation through heavy metal music, pro wrestling, porn, slasher movies, vandalism, fireworks, and the most insensitive strains of shock humor. These rural kids were raised by basic cable, baby boomer parents, and Clinton-era lackadaisy, tempered with the kind of leftover AIDS-related paranoia that made The Anarchist Cookbook seem a little more relevant than the Kama Sutra (at least for the younger teens who hadn't started dating yet).

A lot of the early friendships I developed were with these roughnecks. As Towson-Glen Arm became a driving force in Baltimore County's underground scene, some of the metal-heads got caught up in it's roving blob of absurdity. Real deal heavy metal, alt rock, and garage punk bands like Shovel, Subversion, Demator, and Sir Pulp started collaborating with TGA artists in contexts that fell far outside the narrow confines of 90's rock.

Back then Glen Arm resident Ron Ulrich was one of my closest metal-head friends. Ron was the drummer for a popular metal band; him and his crew of ruffians and bandmates were about as unpredictable as you could get. They'd show up high and drunk to concerts, wrestling each other, screaming offensive epithets randomly, throwing up devil-horn hand gestures while shouting "Hail Satan!" and generally representing the forces of chaos. Among this tight-knit circle was an older guy named L.J. who played bass in Ron's band and a few other Glen Arm groups. I was 19 and L.J. was probably 23 or 24 when I first met him. In a scene dominated by teens, L.J.'s presence was rare and a bit unsettling, but his age was just the tip of the iceberg. L.J. was extremely fucking weird and troubled. Usually decked out in all black clothes à la The Crow, with a wide-brimmed cowboy hat, trench coat, and cowboy boots, L.J. had an average-to-paunchy build, pale white skin, and long hair, usually tied back in a ponytail. He always kept a confident macho grimace on his face, but in reality he was an insecure person who had few friends.

A lot of the underage kids he hung out with didn't really like him; they mainly let L.J. come around just because he bought them alcohol and cigarettes. L.J. would also serve as chauffeur for many of these lunatics, carting them around for liquor runs, drug deals, mailbox baseball, and God knows what else. Naturally, the party-on-wheels often spun out of control. One example: while driving to a suburban house gig, his carload of drugged out rowdies trashed the inside of his vehicle. In a fit of destructive euphoria the kids started slashing apart the seats and scattering the foam cushioning all over like confetti. Then, after they used lighters to set the car's interior roof on fire, L.J. crashed his car during rush hour at a busy corner near an I-83 exit in Timonium. Luckily, no one was hurt in the accident, but minutes later the wasted passengers could be found wandering through the quaint neighborhood dragging around gnarly chunks of L.J.'s car they'd snuck off with before the police and EMTs arrived on the scene.

Taking advantage of L.J.'s hospitality was nothing less than a hobby for the metal brigade. They'd loiter at L.J.'s family home in Glen Arm, raid the pantry there, and steal stuff from him, most notably bits and pieces of his record collection. One fateful afternoon in the summer of 1994 Ron Ulrich busted into L.J.'s room unannounced, only to find that his older accomplice was nowhere in sight. Unconcerned about the poor guy's privacy, Ron started digging through L.J.'s records and other personal belongings. He stumbled across what he thought was a cassette filled with hellish metal blasts, but when he popped it into a stereo the sound that came out was not a barrage of loud riffs. Instead it was a homespun recording of L.J. panting,  gasping, and quietly reciting strange poetic descriptions while surrounded by the trilling noise of a sticky summer night deep in the fields of Glen Arm.

As Ron continued to listen, a brutal intimacy began to ooze from the speakers...