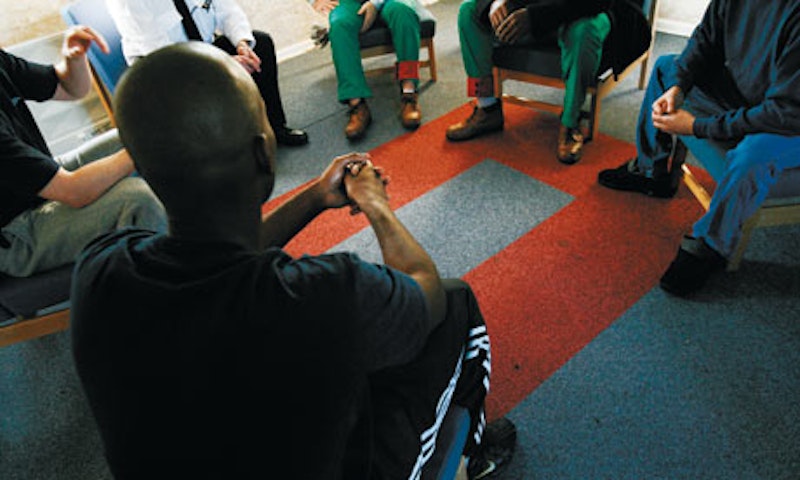 Combine fruit juice and water in a large plastic bag. If no bags can be found, a toilet tank will do. Add several packets of sugar and two Honeybuns torn into small pieces to expedite the yeasting process. After three days of fermentation, filter with the cleanest socks you have and drink. This recipe comes from David D., who spent 25 years in prison. I’m not sure what David D. did to land this sentence and, of course, I wonder if he killed someone. He doesn’t look like a murderer. He wears smart glasses and his shirt is ironed and he’s in good shape, unlike the rest of us, who are either too thin or too fat. David D. doesn’t look like a drug addict any more than he does a murderer but I know he is one because everyone here is. David D. is the most verbose and articulate among the ex-addicts who meet in this room every Wednesday, and I like listening to his stories about prison, as horrific as they are. I like listening to everyone’s stories in this room, which are so different from my own that every week I have the same thought I did the first time I stepped on a different continent: so this exists after all.

David M., who sits across the table from David D., spent ages 18-29, 31-38, and 40-47 in prison. In the two months he’s been free, his mother died, his wife confessed that she has a boyfriend and that she loves him, and he met his grandchild for the first time, who is a teenager and not as likely as to love his absent grandfather. David M. is still not used to freedom. He takes his own utensils and plate to the dinner table then and takes them back to his room afterward, unused to having a full drawer to choose from. David D. laughs at this from across the table. It gets better, he says, or at least it gets easier.

At times, David D. and David M. are the only ones who talk in the room. You hear about Bill Smalls?, David D. asks. I was in the next cell when someone cut off his head and rolled it down the hall like a bowling ball. David M. says he was in the next cell when a prison guard beat an inmate to death and then hung him from the top bunk to make it look like suicide. The showers, they both say, are the worst. Theresa J., who takes a medication that causes such a terrible sickness when combined with alcohol that drinking on it is considered a suicide attempt and will land you in a psych ward after the ER, says, I hope you held onto that soap. We all laugh.

It’s surprising how often we laugh in this room. Liza H. says she thanks God every day it was coke she was addicted too and not meth. I lost my nose, she says, but not my teeth. We laugh good-naturally about her optimism and again when Charley D. says he’s started watching daytime TV and now he can’t go an afternoon without The Young and the Restless. We laugh at that as well: a large brown man with three tears tattooed under his left eye fighting drugs with soaps. When Tabor S. shakes his head, laughs, and says he was just a junkie when he went into prison and a junkie and a wino when he got out, we laugh with him too.
But mostly instead of laughing, we nod. Trace C. says he used to reward himself for a night of sobriety by getting high the next day, and we nod. Janice E. talks about how now that she’s sober, she changes light bulbs when they burn out, something she would have ignored before, not because she was so drunk she couldn’t stand on a chair to change the bulb, but because what was the point? It was just going to burn out again. We nod when she says this because we know what it’s like to see a burned out light bulb or a pile of dirty laundry or a floor that needs sweeping, and think, what’s the point?

There are nine of us here today, including me and Ms. P, the social worker moderating the session who looks just like a social worker and always seems a little nervous. There are three white people in the room. Sometimes a young white woman who moved in with her parents after her husband put her in the hospital shows up. She has a receding hairline and a gecko tattooed on one side of her neck and the word George tattooed on the other. She isn’t here today, but Tony G., the other white person who shows up on occasion, is sitting beside me. Tony G. wears a dirty baseball cap low over his eyes and has metal earrings that pull his earlobes down. He rarely talks, but when Miss P. asks he how he deals with anger, he clears his throat in a dry, violent way, and says that when he’s angry, he takes his handgun outside and fires a couple rounds into the dirt. This disturbs me, but not as much as what Jermaine C. says he did two days ago when he got in a fight with his baby mama—about what he can’t remember, only that the bitch was wrong. He went for a walk, which is what Ms. P advises us to do when we’re angry, but it didn’t help, and when he came across a possum behind the McDonald’s dumpster, he picked up a brick and beat it to death. Worked better, he says, than deep breathing.

We do a lot of writing exercises here, which are meant to make us think about barriers to recovery. Today, Ms. P gives us photocopied worksheets with instructions to write down the names of six friends and how they help us meet our needs. Friendship is something we often talk about. Most people lost friends when they used and more when they quit. Carol K. says her two mutts are her friends. Jonny F., who uses his finger to follow the directions in his exercise book and whispers the words as he reads, says that the only friend he’s ever had was crack.

I am visibly different from the rest of the group. I’ve never smoked crack or been to prison and my problems are more along the lines of a poor performance in graduate school than spending my rent money on heroin. I drive my Prius to work in an office with casual Fridays and Christmas bonuses. After this meeting is over, I’m using a Groupon to get a hot rocks massage. It even seems at times that we speak completely different languages, the others and me, and I wonder if they have a hard time understanding me. I don’t know what the others think of my business casual and electric car, but they seem to accept me like any other addict in the room. When I talk how plainly unfair it is that I can’t drink anymore, that I have to avoid even walking past bars when other people can have a drink before dinner and then go home for dinner, they nod, and it’s clear we’re similar enough.

After we’re done with the worksheet, I feel lucky that I have six names to write down. I have more than six, even, and a big and helpful family as well. Brandy L., who has diabetes and wears a towel around her neck on hot days, says her granddaughter is her friend but her son won’t let them see each other even though she’s sober now. Some say they’ve made friends at AA or NA and others say they have friends at church. That’s another thing different about us: most of them turned to religion when they got clean. When Teresa W. is writing down the names of her friends, she calls out, How do you spell God?

I am not Teresa W. I didn’t drop out of school at 15 or sell my body for drugs or get HIV from a drug dealer, and I have no faith in God, however you spell his name. But I do have faith in recovery, and if God is Teresa’s way there, I hope her belief is strong. All of us in this room hold on, perhaps foolishly, to the faith that David D. will never again drink wine from a plastic bag and that David M. will get to know his grandson and that some day all of us will unthinkingly walk past bars and street corners and into the arms of friends. With or without God, we keep faith that it will get better, or, if not better, at least it will get easier.