Rules For Working With Assholes

Every office has one. 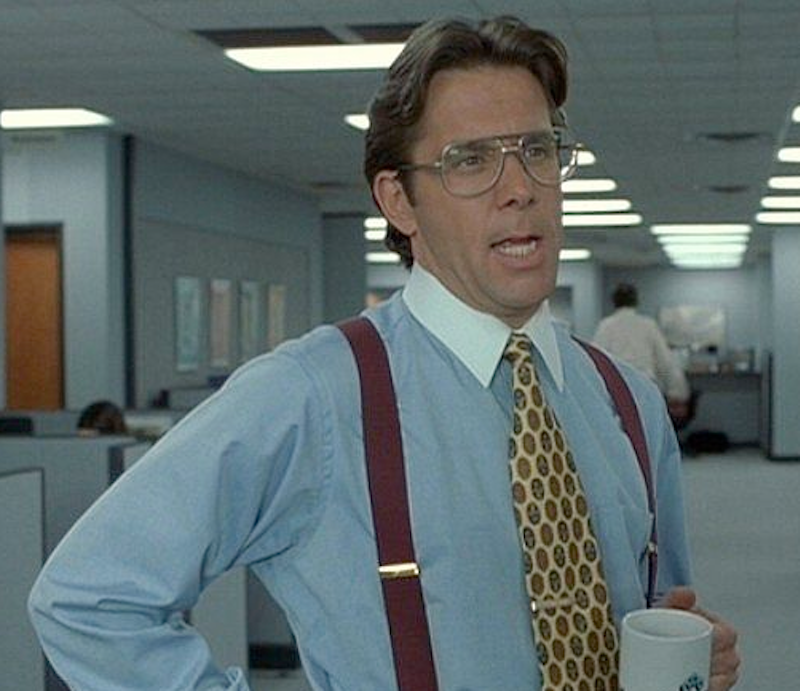 No matter where you work, there’s bound to be an asshole in the office you just can’t stand. Maybe it’s your boss? Or just a co-worker you had a bad date with? Her name is something like “Emily” or “Becky,” or if it’s a dude he goes by “Anderson” or something more cross-gendered, such as “Kelly.” This is the person you cringe-smile at when you dart past them while getting a handful of Bic pens from the supply closet. You know the smile I’m talking about—the one where you squeeze your whole face real tight, body language that says “Don’t you know I will cut you? Have a fabulous day!”

I’ve been watching reruns of 24 lately, and one thing I really like about the show, the terrorist fighting and shooting aside, is the spot-on portrayal of office assholes. Nobody likes anybody on that show, but they all have to work together to fight the evildoers. Mrs. Palmer, President David Palmer’s fabulously conniving wife, is an admirable asshole. With one sassy, skeptical eyebrow raised and a tone of voice that suggests you better do exactly as she says, Mrs. Palmer gets what she wants by being mean and abrasive.

But is being an asshole the only way to get things done?

There are several kinds of office assholes out there. There’s the one who acts like she’s running the show even though she hasn’t fully graduated from orientation week, doesn’t know where the office cafeteria is. Here she comes in her Chanel suit, ready to run the place, but you’ve already been in the office for five years and know way more than she does. You’re a little jealous the boss didn’t give you her job, but you slept with him, twice in the office. Everybody knows, saw the sex-tape, so obviously if you got promoted it would look a little suspicious. How to deal: completely ignore her. She’ll get the hint.   Then there’s the abusive underminer, almost always a boss but even worse if it’s just a co-worker, who questions everything you do. These figures aren’t right. This sentence grammatically incorrect is. You need to work faster! You’re breathing too much. Mistake, mistake, mistake. If I’m so awful and make so many mistakes, boss, then why did you hire me in the first place? How to deal: look for their mistakes and sarcastically point them out.

There’s the one who doesn’t like you—no reason. He can’t stand your writing, won’t publish your articles, edits your pieces way down, or abrasively talks down to you like you’re an uneducated peon. All you want to do is grow 20 feet tall and roar, “fuck you!” over and over. How to deal: cringe-smile. He has you by the balls—he knows he can be this way to you and you’ll keep coming back, like a true sadomasochist. Is the office basically an S&M camp?

But sometimes, office assholes roam free and in secrecy, without any obvious identifiers, which makes working with one really scary and unpredictable. They coax you into thinking they’re your friend, only exposing their true nature when it’s too late. I once did a project with somebody who was a secret asshole—fabulous at first, but suddenly and out of nowhere became a complete train wreck. No explanation, either. Just completely checked out, which was extremely rude and ungrateful in my opinion, which is unfortunate because it will eventually come back to bite them in the ass. How to deal: place them on the life-long, permanent shit list.

As soon as you put somebody you work with on your shit list, you can’t be all vocal about it—not at the office. If you need to vent, open up an anonymous Twitter called “Shit My Asshole Boss Does,” get 100,000,000 followers and a book deal. But whatever you do, don’t tell your coworkers about how much you hate “Becky,” because they could be assholes in disguise. You still have to go to work, so just be chill and cringe-smile. This is what your BFFs and boy/girlfriends are for. Unload all the office drama on them, because otherwise it will come back to bite you in the ass.