The brilliant Absolut Vodka advertising hustle of the late-1980s. 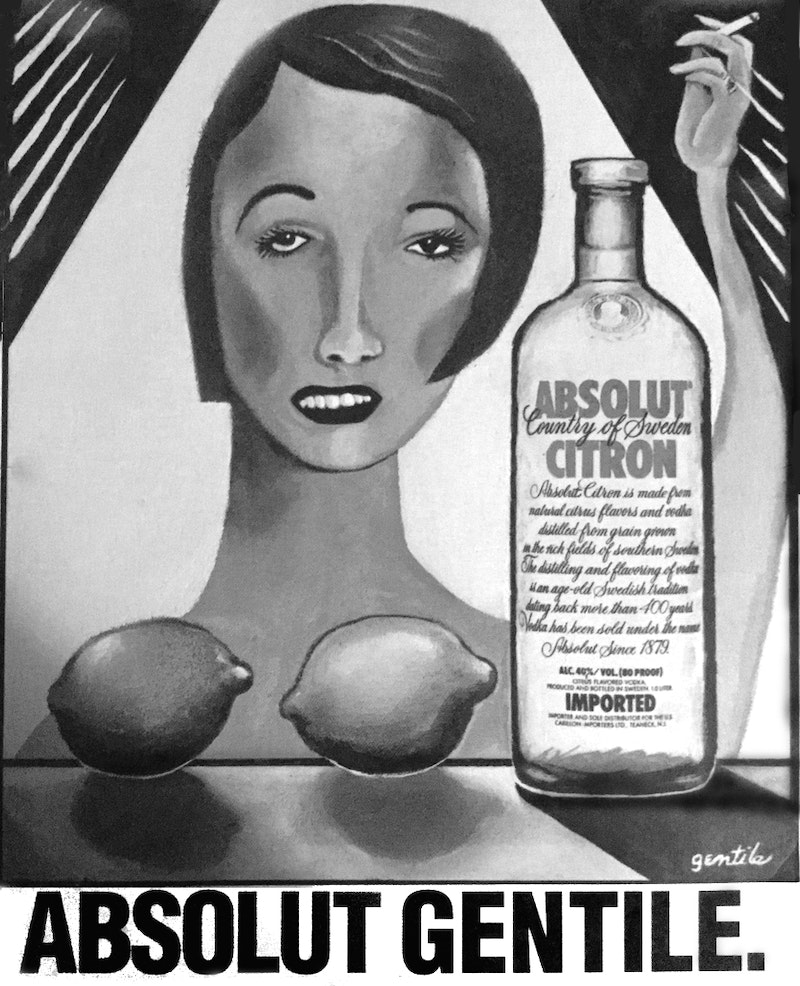 Even a one-eyed dog couldn’t escape the promenade of Absolut Vodka advertisements that, at least to this subscriber of 75 magazines, dominated the commercial side of media in the late-1980s. It was a relentless and brilliant campaign—the best since Rolling Stone’s “Perception Vs. Reality” effort earlier in the decade—and owned the back cover of glossies, no matter the circulation. In a 2015 Adweek article, David Gianatasio estimated that Carillon Importers (later switched to Crillon), which introduced the potable to American consumers in 1979, and its ad agency TBWA, produced over 1500 separate bottle ads, including works by Andy Warhol, Keith Haring, Annie Leibovitz and Helmut Lang, as well as every city imaginable. Really, Absolut Norfolk?

It’s clear the cleverness paid off, as Absolut became the “it” vodka for several years before consumers moved on to Grey Goose and Svedka, not to mention premium tequilas that pushed Jose Cuervo—the Stones’ liquor of choice on their 1972 tour—into the downmarket category.

Gianatasio writes: “[O]bjects of every sort—from lunar reflections of water to an overhead shot of Central Park—were cast in the shape of Absolut bottles. ‘These looked more like covers of The New Yorker than advertisements,’ said Robert Thompson, a professor of culture at Syracuse University, while the poetic quality of the minimalist text was in a realm of its own.”

A month before I published the first issue of New York Press in the spring of 1988, our advertising director Michael Cohen spent a boozy evening at my Tribeca apartment, and we tossed around advertising ideas for the coming year. Some made the cut, others didn’t. I’d spent several months traveling around Europe and Asia the previous fall, and was struck by newspapers featuring a small advertisement on their front pages, a concept that was ridiculed by America’s prestige newspapers—the separation of church and state and all that high-minded jazz.

I thought, and Michael agreed, that a tasteful front-page ad made sense: if a newspaper was, in a sense, a billboard for a distinct locale, why not let retailers in on the party, too, and at a premium price. So our first issue in April did in fact have a small ad at the bottom of the front page, a practice continued until I sold the paper in 2002. Another concept was vetoed: I’d considered, aping London’s Sun tabloid, featuring a Page 3 topless lady (and given the times, on occasion, beefcake as well), figuring it’d be one more reason, besides the classifieds, listings and astrology column, for readers to pick up our free weekly. Michael laughed uncontrollably, and then said, “You’re cut off, dude. I couldn’t sell a single non-adult entertainment ad—and, hmm, that could be a smart spin-off newspaper—if we have tits and dicks on page three.” I conceded his point.

Also, on that night, Michael vowed to sell a year-long contract to Absolut, if not at the launch, a year into our run. I didn’t have much hope for his quest—Absolut was in the glossy camp (Interview, Vanity Fair, L.A. Style, Spy, Esquire, GQ and other obscure fashion/culture titles that aren’t remembered today)—and didn’t mess with “freebie” weekly newspapers.

It was extraordinarily difficult selling space for a start-up, especially in jaded New York, but Michael and his staff plugged away, and plugged some more, and we had an okay first year, reserving money not for publicity but rather green street boxes, topped by a “Best of Manhattan” issue that totaled 48 pages, and featured a cover illustration by Drew Friedman. Early on, Michael would bring me along on important appointments, and we made a good tag-team, even if we failed to land an account. We’d shake hands with the dubious proprietor, smile, and say, “You’ll be with us in two years.” And about half of them were, and those initial meetings were forgotten.

One spring day in 1989, Michael had finally secured an audience with Carillon’s Wizard of Oz, Michel Roux, in Paramus, New Jersey. In our small world, this was a big deal, and I must admit that I was off during the appointment for some reason. It wasn’t nerves, since this wasn’t a new task, but probably a crick in the neck from sleeping funny. In any case, Michael stole the show, laying out a plan for the inscrutable Mr. Roux, with mock-ups of black and white Absolut ads for New York Press, spotlighting a bunch of our regular artists. (At the outset, NYP’s content was illustrated by drawings rather than photos, another “weird” idea, but one that dovetailed with our heavy reliance on talented cartoonists—like Ben Katchor, Mark Beyer, Kaz, Mark Newgarden, J.D. King, Charles Burns, among others—in the back pages.)

Must’ve been a slow day for Michel since he let Michael pitch him for 90 minutes, and I swear the then-in-vogue phrase “cutting edge” was voiced at least 50 times. At the meeting’s conclusion, we did in fact secure a year-long contract, even if we went “off rate-card” and sold the pages at a discounted $600 per. The above image, “Absolut Gentile,” from art director Michael Gentile, was one of four rotating ads, the others by J.D. King, Lisa Blackshear and another name that now escapes me. After 52 weeks, the contract wasn’t renewed—not for effectiveness I don’t believe, for how could the Absolut bean-counters possibly measure how many units of vodka were sold by means of a single publication, but just on a shifting strategy.

We weren’t pleased, naturally, but the job was done: that Absolut had bought space in this weekly led to liquor stores and other retailers who were more impressed by the full-page liquor ad than the geisha-to-go “dirty” ads tucked away near the personals.