As Years Melt Away

We change much faster than the seasons. 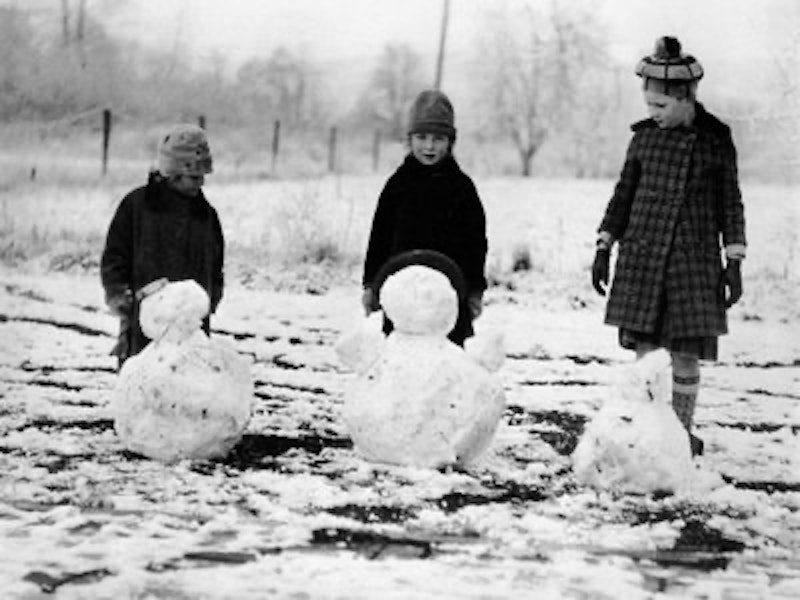 The first snow of the season arrived. Like a fresh coat of paint, a new layer of untouched snow covers a sad world of sins. Masking imperfection and transforming the city. It’s fresh, pure, clean, and invigorating. Covering garbage and hiding litter strewn sidewalks and alleys. It makes the city look festive like a holiday card. We looked forward to snow as kids, the schools closed and we were free to go sledding down the hills in the nearby park. The snow-packed side streets around the neighborhood were perfect because the salt trucks rarely got to the secondary streets until a few days later. By then it was a sheet of ice. Building snow forts and igloos was fun but too much work for us and eventually ended in snowball fights. Snowmen popped up here and there. There was always the threat of some bully shoving snow down your pants or pushing you into a snow drift. Making snow angels or writing your name in the snow with a steady stream of steamy hot piss. Not exactly a Currier and Ives festive winter scene.

Today I try to avoid snow. I won’t drive if it’s snowing heavily. It's the best excuse to do nothing. "Sorry, can't be there, it's snowing."

Hysteria and panic hits the day before a predicted snowfall. People run to the stores and stock up on stuff just in case. We might be snowed-in a few days, better get this 24-roll bundle of butt wipes. Catch up on a good book. Binge on movies. Sleep all day, eat and drink too much. For the ambitious and energetic, shoveling a path to the car is good exercise or a potential heart attack. You need to be prepared in case the plow comes through and buries your car again after you spent hours digging it out.

I let the sun take care of snow accumulation. By spring every trace of it will be gone. Except for those unsightly dark, dirty mountains of plowed snow at the edges of parking lots. There’s an old yarn about the drunk who passed out while stumbling home in the snow on New Year’s Eve. They didn’t discover his body until April. Watch the sky before it snows. Shades of gray, thick like smoke, you can feel it in the atmosphere. After the snow ends the air is intoxicating like pure oxygen. It stimulates something ancient deep within us and revitalizes the senses with clarity and lightness.

Traditionally snow for the holidays is a welcome addition. It gives us a sense of security to be safe, warm and cozy at home with family and friends as a wintery blanket of snow carpets the landscape keeping us all happy together. Watching classic movies, with Bing Crosby crooning in White Christmas, or Miracle on 34th Street. Jimmy Stewart babbling in It’s a Wonderful Life. They’re enough to drive you insane. But the weather, like life, is unpredictable. It can change everything in a split second of devastation or sheer enjoyment. Fair-weather friends and relationships can run hot or cold. An icy shoulder or a hot embrace. We change much faster than the seasons.

This year’s been especially rough for many who let things out of their control ruin and rule their lives. People are going bonkers over the president as if he’s worse than the last 44. It’s the same as it ever was. It’s war all the time. It’s the rich getting richer and the poor staying poor. It’s crime and drugs, hatred, tainted water and bad food or no food at all. It’s too little too late. It’s angry people who are fed up with everything. There’s love to be had somewhere out there. Happiness is a smile away. To go play out in the snow again. Keeping the promises of better days and hope for the future. The laughter of children and the kisses and hugs of loved ones. People who care. Prosperity and peace around every corner. A new year to celebrate. Faith for tomorrow. The possibilities are there. The dreams are endless. But for now it’s just Winter in America.