Mr. Harris has contempt for a corrupt Americana. 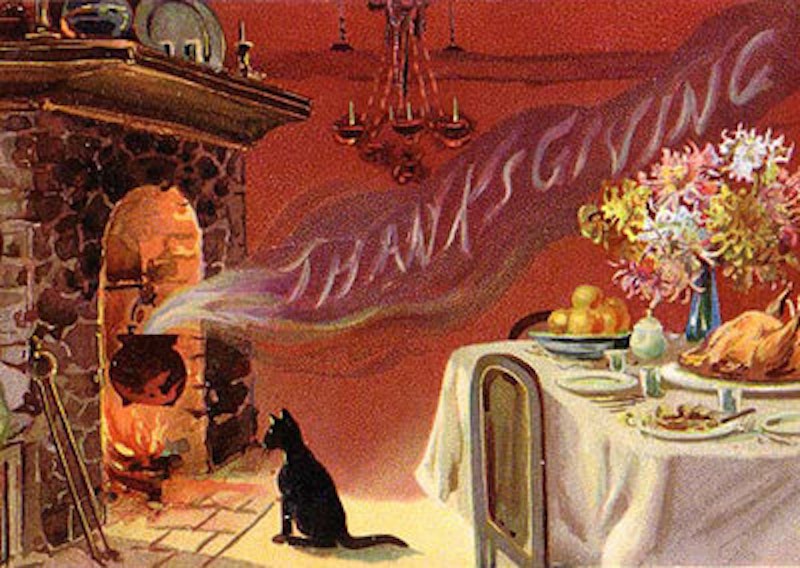 For years we’ve declined to celebrate Thanksgiving here at our Benedict Option homestead in the Hoosier State. We’ve been “holier than the Pope”—to use what might be, given our allegiance to Moscow and not Rome, an inappropriate expression. This has meant cultivating a contempt for a corrupt Americana: for the rituals of a vulgar arriviste country without the “deep culture” of a dignified Old World nation, like Russia. Thanksgiving, it has seemed to us, is a gluttonous bacchanal for a nation of obese post-Christian diabetics. Indeed, I’ve always kept in mind the famous statistic: That the caloric intake at a typical Thanksgiving family dinner exceeds the annual intake of a Russian pensioner, perhaps a splendid veteran of the glorious anti-liberal-fascist action in Prague in 1968, living in a fine Brezhnev-era tower complex outside the charming city of Irkutsk.

But I’ve rethought my position on this late-November holiday. Partly this has to do with the mellowing effects of age, especially given the health issues I’m now confronting. But it also has to do with our little religious community’s attempt to reclaim Thanksgiving from those who have appropriated it. Even if we here at the homestead—Mother, Brother Aiden, Sister, and I, not to mention Daughter—are stalwarts of the Russian Orthodox Church, Moscow Patriarchate, we’re also “ethnically” American, descendants of old white Anglo-Saxon Protestant stock. So Thanksgiving, at heart a celebration of white Protestants’ tenacity on the edge of the continent-wide wilderness which they arrived in 1620, is really our holiday. Rather than abandon it, we ought to reclaim it, rousting it back from the “ethnic” elements who have commandeered it (just as they’ve done with our United States in general). We indigenous Americans have our own dignity and worth, and we shouldn’t be so quick to give away what’s ours. We’ve given away far too much already.

The upshot: By the time you read this, the Harris homestead will have celebrated a Thanksgiving feast for the first time since 1998.

If nothing else, this celebration will give me a turn in the kitchen. Now, I wouldn’t dare to deprive Mother and Sister Marie of their usual positions at the hearth. But I imagine that they’ll be happy to stick to what the Russians call the “sow’s work” of the kitchen: scrubbing the potatoes, shelling the chestnuts, picking imperfections off the mushrooms, worrying the compost bin with the wooden paddle, scrubbing the floor at short intervals to ensure that morsels of dropped food don’t stick to the soles of my sandals, bagging the trash, scrubbing carbon build-up out of skillets, and perpetually grinding my collection of three Japanese knives. (I demand a sharp knife.) I, on the other hand, will preside as the “governing intelligence” in the kitchen this year.

My plan is to spatchcock the turkey, which will cut down on roasting time, relieving Mother of several hours’ worth of labor at the bellows.

The only worrisome factor is Brother Aiden. My co-religionist, who cultivates an unruly tangle of grapevines adjacent to our goat-pen, fancies himself a winemaker, with generally sub-par results. He mostly keeps the dismal fruits of his labor to himself, but at big feasts he likes to share them, and I’m afraid that this year he’ll even presume to pair his “wines” with my own subtly calibrated culinary creations.

There’s something passive aggressive to Aiden’s behavior at these events. There he stands, a slight and anxious little man, stooped, chinless under his sparse beard and the peculiar, almost Levantine skullcap he for some reason favors, worrying his hands, bopping a bit in his sandals and googling his eyes as he stutters, “What? I made the Concord grape stuff to match the blood pudding. What, John? Huh? You don’t like wine?”

I like wine well enough. I only wish that Aiden’s skill with the vat were keener. One of the few imperfections of society in Putin’s Russia is the tendency of its home vintners to fortify their wines with sugar, thus making their efforts undrinkable. I regret to say that Aiden is guilty of this mistake, too, in addition to his various other sins against the grape.

Anyway, I intend to serve my own home-brewed ale with Thanksgiving dinner. Flavored with anise roots and hawthorn berries, it’s a noble beverage, and it should complement the well-brined bird.

Whatever happens, I’m sure that with Christian humility and the aid of prayer we’ll safely navigate this dinner. Belated good wishes to my fellow ethnic American Protestants on the occasion of a holiday that is ours more than anyone else’s.