Looking back from Pennsylvania. 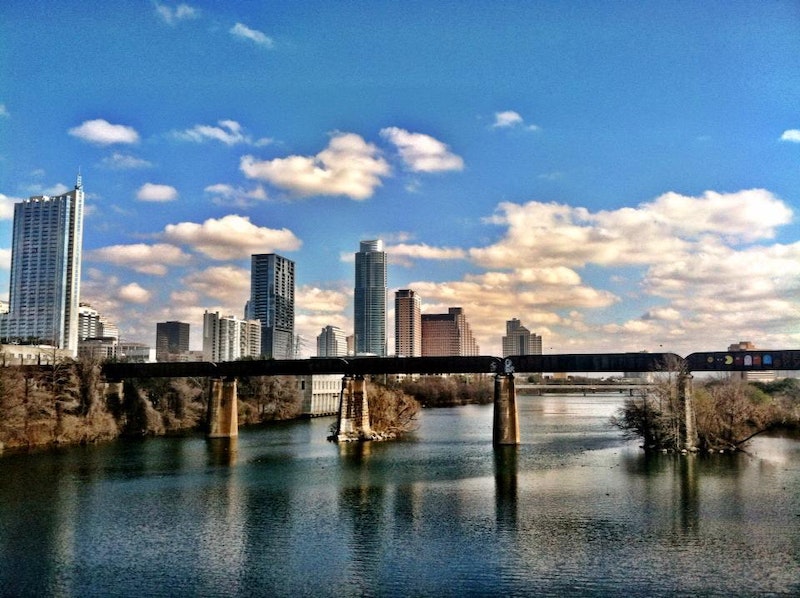 Diversity run rampant. There's something awesome about living in a place where you could go to a public event and hear 10 different languages spoken without even trying. Of course, I know that's a minus for some folks.

Sprawl, sprawl, sprawl. The beauty of a metropolitan area expanding as rapidly and recklessly as Austin, with dozens of people spilling in every day like geysers of maggots, is the suffocating, colorful crush of bi-lingual signage and random automotive miscellany and madly criss-crossing highways, byways, exit ramps, and routes-to-be; it's more exhausting the closer to downtown you get, making the experience of driving so extremely wearying that it takes being removed from the situation to truly appreciate the uniqueness of it. I've never been to Los Angeles, but I always imagine that Austin's a tamed, in-miniature version of that city.

The mellow. Everybody seemed really mellow in Austin, really helpful and good-natured; somehow we were blessed with amazing, generous neighbors everywhere we lived. Our first Round Rock landlord turned out to be a fairly terrible human being, but he lived in California.

Round Rock Christian Academy. Where our son attended kindergarten and first grade, one of those schools where there's an exceptionally strong sense of family, lots of events for parents, the Watch D.O.G.s program, everybody chilling at the birthday parties of classmates, etc. Leaving this school behind was one of the hardest aspects of moving back north.

Going to work every day and interacting with people, making meaningless small talk and cracking jokes. It's amazing how easy it is to take that stuff for granted until it's gone, and you're on the outside looking in from 1600 miles away.

That weird dead zone across from the airport. Route 71 was part of my commute home, a route that takes you past the airport and through a nightmarish no-man's-land of abandoned buildings and fields overrun by weeds and scary skid-row gas stations and trailer parks gone to seed and leathery panhandlers. But right before that Hell and slightly after the airport, on the left, there's a road that leads out into what used to be some kind of huge school system, with athletic fields and administrative buildings, but for some reason it's just abandoned and falling apart. The signs are all blasted through with buckshot, erosion is swallowing what used to be some serious blacktop, there's rough-looking housing framing the scene. I only know about it because I've gone there to wait for family flying into Austin to avoid airport parking fees; there's a bad energy there, the nowhere freak out vibe you only get from horror movies and viscous noise albums.

Whataburger, and Freddy's. Holy shit. Why the heck did I leave again?

Hot sauce, everywhere. Pretty much everywhere you go to eat in Austin, there are two or three types of hot sauce available to you. Good hot sauce.

The looming specter of choice. The sheer number of things to do in and around Austin can only be described as daunting, to the extent that if you come away from living there for three years and have only done, say, four percent of all the stuff you wanted to do, it can feel like a personal failure of sorts. It can haunt you, keep you up nights.