Wally and Mitterrand and Clinton and Death

The photos the dead man left behind. 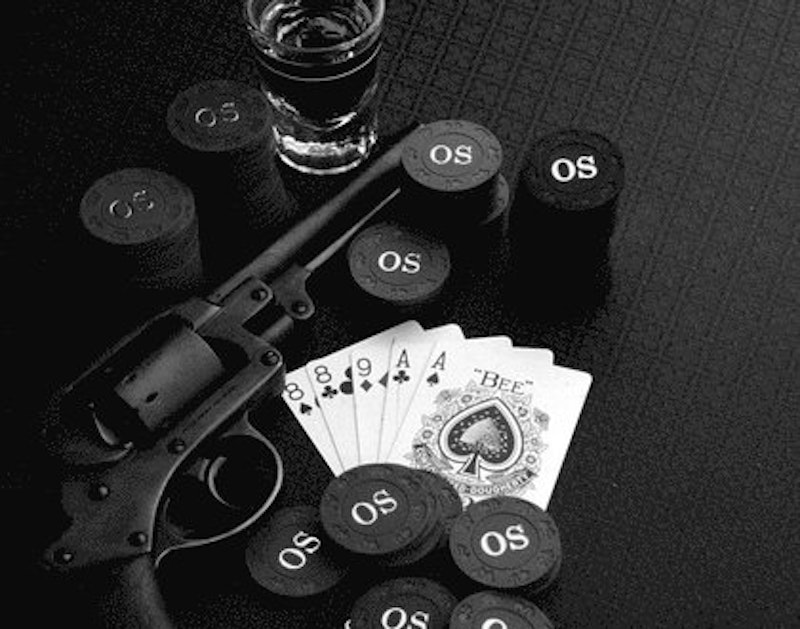 Wally, the man who owned my building, is dead now and it turns out he was a gambling addict. Stacks of casino receipts were found in Wally's apartment, found by my building's handyman. He'd been hired by Wally's brother to sort through the dead man's cluttered apartment. “Eight rooms,” the handyman says, “and every room stacked up. He has things everywhere. The tables”—his arm lunges up—“stacks of newspapers, stacks of receipts, the papers they give. The slips from the casino.”

“With the newspapers, yes, casino receipts.” The handyman said this explained why Wally used to wear a suit and tie; it was for the casino visits. “Wally had to be James Bond,” the handyman said, and it was a fair hit. Google Wally's name and you find a picture of him posed as James Bond, in a white tux and with a long-stemmed black gun in his hand; in the other hand, he holds out an oversized playing card. This was for his side-career as a magician.

Wally was timid but longed for attention. The poor man used to pay world leaders to stand with him for photographs. People like Bush and Clinton do this for a quick $5000 a pop, and I have seen pictures of each man with his hand pinning Wally's, the famous face and smile alongside Wally's clam-gray, stunned countenance. Francois Mitterrand, the Dalai Lama, Arnold Schwarzenegger, generals from Rwanda—they can all be found next to Wally.

For years I'd thought those pictures explained Wally's downfall. He'd run his two buildings into the ground, always borrowing money, and where did it go? Vaguely one thought of gambling, since the idea of Wally on drugs or having sex was enough to shut down the brain. But gambling was a cliché, and at any rate Wally didn't seem the sort for a crowd that raffish. From what I saw, he was always flocking toward the respectable: charities, business organizations, minor royalty. And, as it turned out, world leaders amenable to spare cash. When I learned about the pictures (the building's concierge told me, beside himself with the craziness of it), I was happy to wrap them up with Wally's eBay purchases of royal memorabilia, and his failed attempt at a painted-tie business, and his love of expensive weekend seminars at hotels, and to say here was the unique, personal reason Wally kept losing money: the poor chump aspired himself to death. But it turns out he was also a gambler, or mainly a gambler. The world-leader shots? “That didn't help,” the handyman said.

If Wally was an addict, then he didn't ruin his life through sheer chumpishness. A more powerful force kicked in. The two can go together, but they're not the same. If Buzz Aldrin could get a drinking problem, then why couldn't somebody else, at random, get a gambling problem? Wally might have been that random person. If he'd been stronger, he could have beaten it, but there are strong people who don't manage. I'm left with the thought that Wally might have pursued all his foolishness, the get-rich-quick schemes and the attempts at buying swank, and still have had enough money in his pocket to avoid cadging from banks and family members. That's how well his family set him up. But, along with his stupidity, he had to deal with addiction, and that blew a hole in his attempts to cope with the world. Without the addiction, his life would still have been pretty much of a bust. But the addiction was what made his life humiliating.

So now I feet let down. Wally's nature did not explain his downfall; he crashed for the reason people crash in Lifetime movies or afterschool specials. The handyman sees the gambling as one more example of Wally's pseudo-swank, since James Bond went to casinos. But the handyman also said, more or less, that some of the receipts might have been from the local strip club, which might have “casino machines,” which I guess would be slot machines. (The handyman speaks vehemently and at length, but he's not good on detail.) If so, then Wally, the would-be James Bond, could be hit hard enough by gambling fever to skip the casino and simply pump dollars at a grind joint. Or maybe he found pumping dollars near the girls to be a turn-on. But this brings us to the awful thought of Wally—that lumbering, mound-faced, timid man—getting naked flesh into his head.

At any rate, he never lived his life. He chased butterflies and hoped people would be impressed by him, and looked for tricks and shortcuts, and got eaten up by gambling and then cancer. At his funeral they showed the photos of Wally with Bush and the rest, up on a big screen with music playing.

Cleaning up Wally's apartment, the handyman threw out an armload of world-leader photographs. I thought that was hard cheese. The handyman, impatient: “Mitterrand doesn't care.”