Neil Gaiman vs. Your Five-Year-Old

Because your kid needs to read more comics about rape and demons. 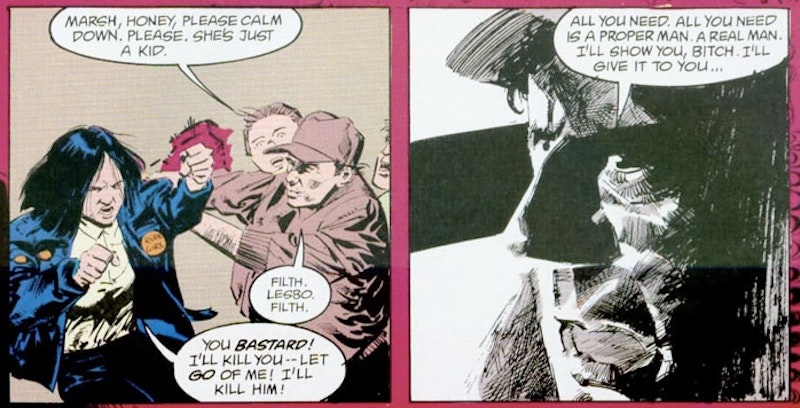 This month, award-winning author Neil Gaiman is going to make an appearance, as himself, on an episode of Arthur, a PBS show aimed towards the elementary school demographic. Gaiman’s written a fair number of children’s books that are actually quite enjoyable, but here’s the problem: Gaiman is going on Arthur as a comic author, not a book author.

I’m not currently a fan of Neil Gaiman. I was an insanely dedicated proponent of Gaiman’s writing up until the time of American Gods. I brought issues of Sandman to high school and collected all of his short story compilations that I could find in those days before the Internet was The Internet. After a while, it became painfully obvious that Gaiman only had a few stories to tell, and that he was telling them over and over using different character names. It’s either about a little girl who finds her way into a world which is similar to her own but with a dark, magical twist, or a “gods walk among us” story which may or may not recycle existing folk tales and throw in a few vaginas to make the story more “modern” and “sexy.” When reading your fourth “lost little girl” story by Gaiman, it begins to wear thin. Most of his fans don’t really argue this fact, but instead fall back on the Universal Gaiman Defense: “I met him and he gave me a hug and I had 10,000 orgasms!”

This is a man who took $45,000 dollars as a speaking fee from a library, during a time when libraries are notoriously struggling and losing relevance, to make sure that they “took him seriously,” and allegedly donated it to Scientology. Allegedly.
Gaiman has every right to portray a cutesy cat-version of himself in a kid’s TV show, but when he’s performing as a comic book author, PBS and Gaiman both need to realize that his comic book output is not suited to children in any way.

While it’s excellent to introduce children to comics as a viable literary medium, it’s alarming that children will be introduced to comics via Gaiman. If you walk into the bookstore and ask for a Gaiman comic, there’s a high likelihood that you’ll be guided to the beginning of the Sandman section, which is rife with torture, rape and plenty of gory murder. Work your way a bit through the collection and you’ll find kids murdered, prolonged visits to Hell, and men with teeth for eyes. Aside from that, there’s Gaiman’s incredibly obtuse, atmospheric works like Signal to Noise, Violent Cases, Black Orchid, Mr. Punch and Mr. X, which contain any number of aspects that are at least PG-13. Aside from his initial, brief run on Vertigo’s Book of Magic, there’s not much of his comic output that’s appropriate for kids.

Gaiman’s priorities have changed, and he shouldn’t be barred from promoting himself to an audience of children because of his comic works, but there should be no promotion of his comics to children. These things exist, but you don’t provide a clear path to them for children.

I’m not an ultra-conservative person, and I don’t believe in sheltering a child from the realities of the world, but PBS has a responsibility to understand who their guests are and the context in which they appear. I still wouldn’t be handing a fourth grader a comic about a villain licking up blood after making people rape and murder each other in a diner.