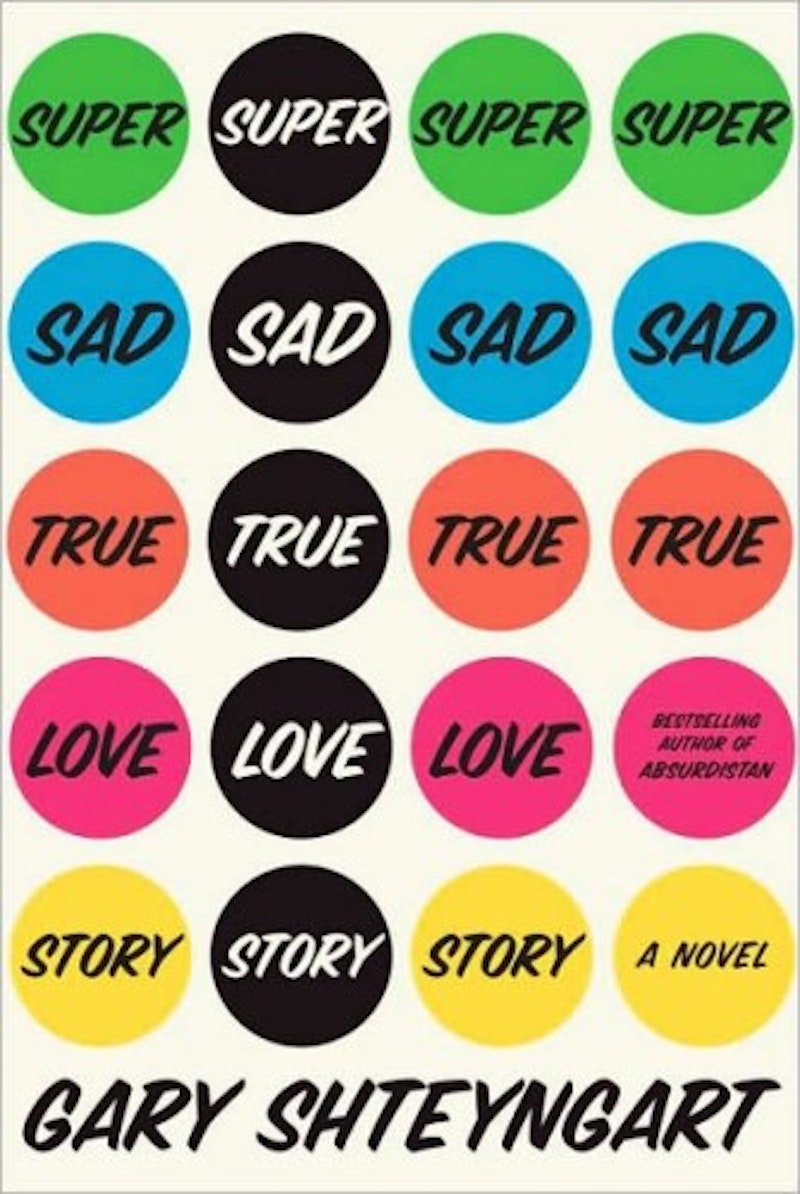 He’s the lazy upper-class intellectual scion of Russian and Jewish immigrants, spineless hipster scum on the cusp of 40. She’s a bratty, twentysomething dropout whose parents ditched Korea for the United States before she was born. He’s not as liberal and altruistic as first appearances suggest, while she’s not as self-centered as it appears at first blush. In Super Sad True Love Story, Lenny Abramov and Eunice Park will fall into an uneasily lopsided love affair that would have been doomed in any era. Given that Gary Shteyngart’s new novel is set in a dystopian not-so-distant future America that‘s essentially a dictatorship, it fails with end-of-days prejudice, even as the author doses his authoritarian existential dread with enough absurdist Valium that the book isn’t quite as terrifying as it should feel. The functional plot is the scaffolding that a number of interesting concepts are hung upon, ideas that will needle and riddle you for weeks after you’ve put Love Story down or returned it to the local library.

1. Right now—if you haven’t read Love Story ye —“apparat” probably means nothing as a word; it strikes you as vaguely European, maybe. In the book, an apparat is sort of a laptop, an iPhone and any number of hospital-room monitoring devices rolled into one pea-sized information-dispensing gizmo that permits its owner to broadcast way too much personal information to friends, co-workers, and total strangers: one’s glucose levels, “fuckability” scores, credit scores, and so on. In Love Story, apparats are utterly normal. The apparat, then, is sort of the endgame in terms of our increasingly TMI info-disseminating pro-Facebook Internet culture, and the more you read about it, the more goose bumps you acquire and the more you want to flee from your computer. Lights, streams and data constantly flash and pop, distracting users as Rome burns around them, amusing them, literally, to death.

2. The future, as Shteyngart sees it, will be full of websites and designer brands with names like JuicyPussy and AssLuxury. No one will blink an eye at this, or at the fact that Onionskin jeans—which are see through and are typically worn sans underwear—are massively popular.

3. Our exporting-only-ideas, importing-physical-products will beget three basic career paths for Americans: Retail, Credit and Media. Working in Media means that you turn your life into a never-ending, streaming-live squawk box show, where walking down the street or meeting old friends for drinks or shaving is transmuted into “content” sponsored by corporate consolidations with train wreck names like “Allied-WasteCVSCitigroup.”

5. Emailing will no longer be thought of as “emailing.” Electronic communication will be achieved using something called “Global Teens”; it will be known as “teening.”

6. Credit poles fill the NYC environs, displaying the credit scores of every person passing by, plucking the information from apparats. The goal is to goad people into spending more money, because the United States is in deep, deep debt, and its markers are on the verge of being called.

7. Remember how, in the colonial era, kingdoms would seize new lands and sort of split them up, occupying different sections? And you know how when companies declare bankruptcy in modern times, their assets are divvied up between solvent companies? Think about that for a while. Now consider what would happen to a destitute United States of America if it couldn’t fulfill its credit obligations. Assets would have to be liquidated. Populations dispensed with. Massive corporations would be called upon to oversee the fractious transitions if the government fell apart. And it would be messy.

10. Hotly anticipated gallery galas celebrating apocalyptic, post-collapse-of-Western-Civilization “art” appropriated from satellite images don’t seem as improbable as one might have imagined. To wit: “Grainy close-ups of people using people in ways I had never openly considered, not because murder doesn’t run through my veins, but because I grew up in an era when the baroque was safely held at bay. An old man from Wichita without eyes, with the eyes physically removed, with one of the eyeholes being forced open by a laughing young man.”

Some of your grandchildren are already this fucked.