My Year of Living Ignorantly in Tokyo

Challenges in a challenging city. 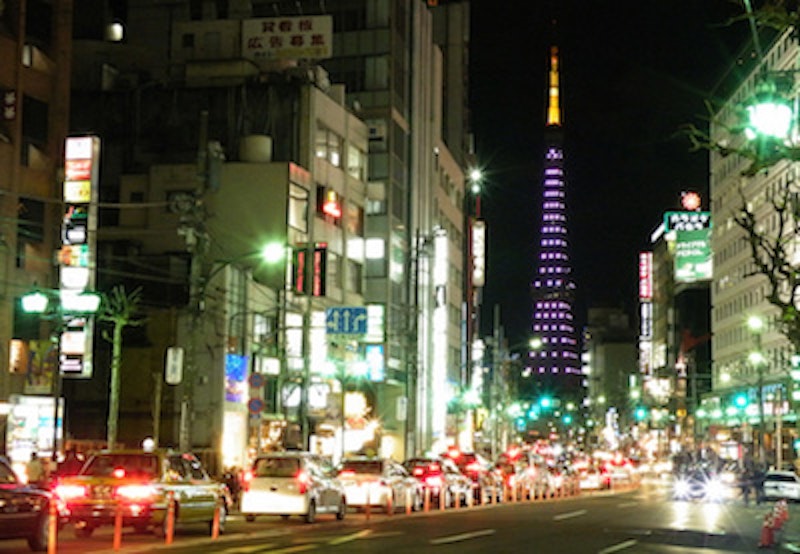 Tokyo’s a mysterious, impenetrable city for an outsider to navigate. It has everything you want, but the trick is accessing it. Since you can’t read the signs advertising businesses, you have no idea what sort of services are available as you walk about the town. On the upside, this can save you a lot of money, because if you wander into a “hostess club,” you might end up paying a few hundred dollars to have a couple of drinks with some pretty young girls who pretend they’re fascinated with you for an hour.

When I first went to Tokyo to live for a few years, the city intimidated me as much as it fascinated me. I loved Japanese food, but wouldn’t go into a restaurant out of fear that I’d be unable to communicate an order to the server. The plastic replicas of the available dishes that were almost always on display in an establishment’s window looked enticing, but I ended up eating at McDonald’s for about the first two weeks. It was pathetic.

The fact that I hadn’t eaten at McDonald’s for years—I thought of myself as somewhat of a culinary connoisseur—compounded my disgust. My hunger would mount, I’d think of going into the sushi or ramen shop, but would end up slinking into a place packed with Tokyo youths for a Big Mac and fries. Surrounded by the noisy teens when I sat down to eat, I felt like an inadequate, cowardly fool. Eventually I figured out that you don’t need to be able to read Japanese to order in a restaurant. Just get the server to come to the window display and point out what you’d like. I never once set foot again in a McDonald’s in Japan.

A few months went by and I needed a haircut. Once again, I was too intimidated to walk into a barber shop or hair salon because I had no idea how I’d communicate. When new to an intimidating city like Tokyo, you need to throw yourself into situations without fretting over the possible consequences. But I couldn’t do this. I was used to keeping my hair fairly short, after having long hair in high school and college, but it soon grew down well past my shoulders. The novelty of the new look was fun for a while, but there’s only so long you can do this. Even a restaurant proprietor I’d become friendly with began remarking on it.

One day, in the Shibuya district of Tokyo, I saw a flier for a hair cutting establishment that was in English, so I screwed up my courage and ventured in, certain that I’d end up getting humiliated. But the guy inside spoke English and all was well. This was progress! Now I could eat as I wished and get my hair cut. But then my tooth started to ache. Having no idea of how to visit a dentist, I just let it go, which obviously wasn’t too smart. I’d never had a toothache before, so I was in the dark.

The pain started getting really bad on a Friday. I knew that I’d have to find a dentist, but it would have to wait until Monday. I gobbled down over-the-counter painkillers. A clerk in the store expressed some concern, but I just smiled and mumbled something. Back in Shibuya the next day, the pain became unbearable so I went into the basement of a department store, where you can buy liquor. I’d rarely had any hard liquor before that day, but purchased a half pint of rum and headed straight for a restroom stall, where I chugged the contents of the bottle in less than a minute. As I tipped the bottle, I remember feeling that it was surreal. How could I be doing this, and in a public restroom? But it was an extreme situation. I drank a lot more (although no more chugging) over that horrible weekend, and took many pills. I’d found an English-speaking dentist in a popular English-language magazine, but had to find a way to make it through to Monday morning.

The dentist’s office was in the Roppongi district of Tokyo, which is popular with foreigners. At the time, I didn’t realize I was about to enter the Little Shop of Horrors. The dentist was ex-Navy, and none too delicate. The root canal he gave me was excruciating and seemed to last forever. I writhed about, clutching the armrests. I was wearing a white dress shirt that day, and it was soaked through with sweat by the end of that ordeal. “This is what you get when you don’t take care of your teeth,” was all the dentist had to offer as I sat in his chair, which wasn’t reassuring. But maybe that’s how they do it in the U.S. Navy. As I forked over $800 for his services, the dentist said something about being sorry he was verbally rough on me, but I didn’t care what he had to say. All I wanted to do is get the hell out of there and never return.

When you don’t prepare for going to a foreign country, bad things happen. In the grand scheme, the price I paid for my ignorance and timidity in Tokyo wasn’t that great. Not everyone gets off so lightly. A friend of mine named John Watson who’d never traveled abroad once saved up his money for a trip to Asia. In Malaysia, he contracted pneumonia, but he was in a strange land so he neglected getting proper medical treatment. Some people he’d met while traveling would later tell his brother in San Francisco that the last time they saw John he was on a beach and looked to be in pretty bad shape. They didn’t make sure he got to a hospital. John died shortly thereafter, of a disease that was easily treatable.

If you’re going to another country you’re not familiar with, think about how you’ll handle certain situations, especially a health emergency. If you get sick, make sure you don’t just let it go. Don’t be my 30-year-old friend on that beach who, in the end, was reliant on some young people he barely knew to do the right thing and save his life. When you’re far from home—a long way from friends and family and your doctor—you have only yourself to rely on. You could find yourself, like John Watson, in the process of dying on some strange beach without even knowing how critical your condition was.