Long Island’s bustling and prosperous Huntington wasn’t always so chic. A native looks back at the days when the area looked more like Levittown than the Hamptons. 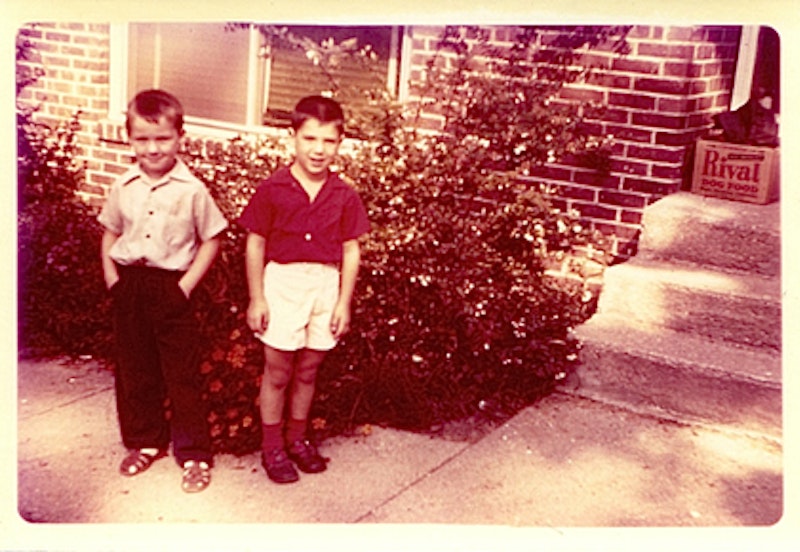 The author, left, and a friend on LaRue Dr. in Huntington. Below, the scene in Kropotkin records in the early '70s.

Earlier this year, rambling off topic during a journalism class at Johns Hopkins University, seven students dropped their jaws in unison when I casually spoke about hitchhiking as a teenager to any number of public beaches in the Suffolk County town of Huntington, New York. “Didn’t your parents have strict rules about that sort of dangerous behavior,” asked an bright young woman from Oyster Bay. I replied that not only were they usually unaware of these commonplace excursions but in any case hitching wasn’t really considered abnormal for pre-driving kids in the area. A different era, I understand, with no cell phones or community alerts about pervs living down the block, but I was still somewhat taken aback by the shock registered, especially since several of the undergraduates have studied the 1960s extensively and voice the not-uncommon sentiment that they were born a generation too late.

Huntington was recently the subject of a puffy New York Times real estate article, “The Heart and Soul of Suburbia,” and though I knew that the town has grown rapidly since my upbringing there, it was hard to suppress a chuckle at some of the comments in Marcelle S. Fischler’s piece. A real estate agent quoted by Fischler, Donna Spinoso, said that people put off by the extravagant housing prices of Manhattan and Westchester, are enchanted by Huntington, where it’s like “living in a New England town rather than the suburbs.” Even discounting the hyperbole necessitated by her profession, I suppose that’s the current image of Huntington, which was echoed by the town’s supervisor, Frank Petrone, who made the even more astonishing—at least to me—claim that “People are attracted to the Charles Dickens storybook downtown.”

If you say so, Frank, but it wasn’t always that way. I remember as an eighth grader at the long-shuttered Simpson Jr. High School welcoming a new kid to my history class whose family had moved in the middle of the school year—always kind of fishy—from the upscale Nassau County locale of Manhasset. The term wasn’t then in vogue, but his father, an alcoholic with a temper, was clearly “downsizing” by buying a pre-fab on Southdown Rd., which was a one-minute walk from our modest dwelling on an extension of the ancient LaRue Dr., an early-50s development in which all 14 split-level houses were exactly the same. My friend’s family, spiraling downward, wound up a few years later in the even less desirable confines of the sketchy Huntington Station—near the Long Island Railroad line—in a ramshackle rental.

Fifteen years ago I actually bumped into my long-forgotten buddy—who was a regular co-conspirator in getting older guys to buy us six-packs of Reingold beer—at Manhattan’s Penn Station and we took the train together to Huntington for a class reunion. That event was predictably depressing—I was dragged into attending by two childhood friends who were also living in the still-burgeoning neighborhood of Tribeca—but was glad to learn Kyle had emerged from a difficult home situation intact and was a prosperous commodities trader in San Francisco.

I haven’t returned since then, but I’ll take the word of the Times reporter that Huntington is now a “hub” of affluence and bustling commerce. My parents, long deceased, would be stupefied by this gradual turn of events. As the youngest of five boys who attended all the same public schools as my brothers and had the benefit (or infrequently, the curse) of drawing the same teachers, I didn’t come in contact with many rich families. There were two exceptions: one family on our hill moved to the tony Lloyd Harbor when I was 12. The father was an airline pilot back when that profession was not only prestigious but also lucrative, and my friend Buddy turned into a real asshole who bragged about all the expensive sporting equipment he had. One classmate lived in nearby Halesite and his parents were wealthy enough to send a limo to the houses of all the friends Jimmy had invited to his bar mitzvah. I’d never experienced that “high life” before and guzzled three Cokes in the backseat on the way to the temple.

That occasion was a notable exception. As a kid I went to six or seven “bars,” as they were called, and most were modest, but uproarious, affairs. One time, in 1968 (the year when most of my friends turned 13), four of us, sitting in the back row of a synagogue, were tossed out of the excruciatingly long service because we couldn’t stop laughing when Bobby, next to the rabbi, started singing in Hebrew. The birthday boy’s relatives weren’t at all pleased, but it was really funny, at least to those of us who were used to the equally mind-numbing sermons every Sunday at Catholic or Protestant churches.

Back at Bobby’s home, on Strawberry Lane, all was forgiven and it was a festive reception with mini-pizzas, Eastern European desserts and finger sandwiches on the buffet table. My mother had this bright idea that Bobby’s gift from me should be practical, something that wouldn’t provide instant gratification, but would come in handy a few years later. It was a yellow slide-rule—and fairly pricey by my family’s standards—and though he was a straight-A student who eventually went to Dartmouth, his reaction didn’t surprise me one bit. “Oh, wow,” he said politely, tossed it on his bed, and then delightedly opened an envelope that contained a $5 bill. I’ve no idea whether he ever used my present—although it’s possible since pocket calculators weren’t yet on the market—but it was pretty nerdy.

The following year, at a huge hall on the outskirts of town, the kind of place where multiple parties—weddings, anniversaries and bar (or bat) mitzvahs—were held simultaneously, a smart-aleck goaded me into getting on stage and singing The Doors’ “Light My Fire” with the atrocious house band. It was a set-up, of course, especially since my voice wasn’t of the quality that merited even a tryout for the church choir (no loss, in my view), and I was red-faced and pissed off for the next half hour, fending off unbearable ridicule.

Apparently a number of what were once called jet-setters have now settled in the greater Huntington environs—particularly in Cold Spring Harbor and Northport—but in the 60s celebrity sightings were rare. One winter day at lunch a popular girl named Amy caused a serious buzz when she told a group of us about a skiing trip that past weekend. It seemed on the lift she found herself seated next to one of the late Bobby Kennedy’s teenagers and quickly capitulated to his charms, such as they were. He invited her back to his lodgings, produced a pound bag of grass, and then strongly suggested they retire to the bedroom. Amy, 14, was mortified and beat a quick retreat, trying to ignore the privileged scion’s jeer of “You missed the chance of a lifetime, you frigid cow!”

Nonetheless, Huntington in the 60s was a cool enough place to grow up: it was only an hour to the city and I started frequenting the East and West Villages when I turned 13, making pilgrimages to the musty bookstores on 8th St., bootleg record shops on 1st Ave., and always stopped for an Orange Julius and tuna hero from Blimpie’s, delicacies that couldn’t be found in Huntington.

On weekends or summer days, if I wasn’t mowing lawns, I’d spend hours at Kropotkin Records, a beat-up hippie store not far from Heckscher Park that opened in the late year of 1970 (demonstrating that Huntington, with a mixture of middle and working class families, didn’t immediately embrace the counter-culture). Obviously, independent retail outlets barely exist anywhere in the country today, but Kropotkin’s was Huntington’s far less-storied equivalent of Rasputin Records in Berkeley. It was a place where kids could hang out without buying anything and just talk to the owners about music, gossip and make plans for the evening. LPs were three bucks apiece—better than Sam Goody’s at the Walt Whitman mall—and, if so inclined, you could add a name to the store’s “shit list” on the bulletin board. I don’t think such an oasis could exist in today’s Suffolk County replica of a quaint New England town.

Oh, and on Main St. there was a thriving Woolworth’s, where on occasion my mom and I would sit at the food counter and order a plate of French fries and a Coke for a quarter apiece. Nothing too fancy, I guess, but that was high living in my book. Several blocks away, a pizza joint opened in 1965—a tough sell, since New York Avenue’s “Village Pizza” ruled (as did the nearby single-screen movie theater, where, incredibly, I saw the Allman Brothers, before Duane was killed, in ’71)—and it was a bone of contention between one of my brothers and me. He boycotted the place because of the nasty German counterman—hard to believe, but this was just 20 years since the end of World War II—reputedly spit on the food when no one was looking. That tidbit of local folklore didn’t sway me at all, since the pie was the best I’d ever tasted, no mean feat in the New York metro area. That put me in the minority, I guess, since the franchise didn’t last even a year.

An earlier version of this story appeared on www.nypress.com.