Hard to See in the Dark 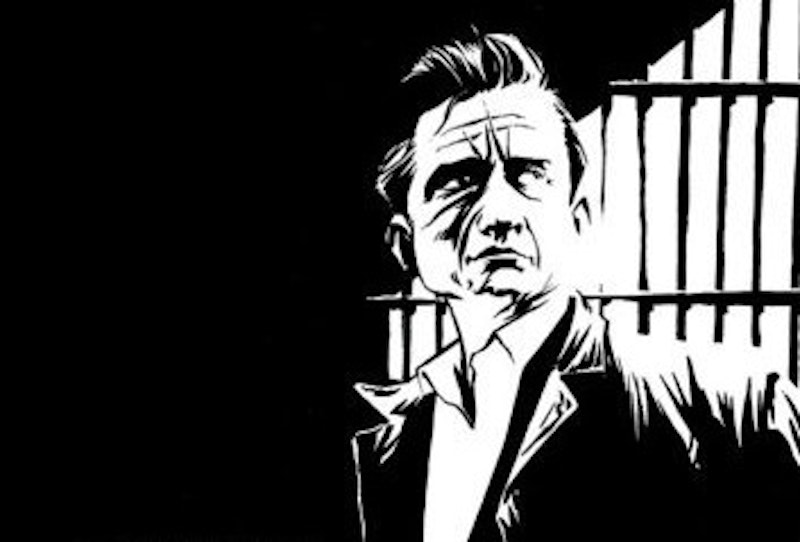 Johnny Cash has been my favorite performer pretty much as long as I’ve had a favorite performer. When I first heard those bleeps on the Folsom Prison album, I was young enough that I actually didn’t know what was being excised. I first learned what “curfew” meant when I asked my parents what Cash was getting arrested for in “Starkville City Jail.” I’m not certain at this late stage, but I think that same song was the occasion for my first introduction to the concept of controlled substances (“he took my pills and guitar picks / I said, Wait my name is … / Aw shut up / Well I sure was in a fix.”)

As a kid I was, not uncommonly, given to some fairly abstract daydreaming, and Cash figured in those as well. Specifically, I spent a certain amount of time wondering why people thought musicians in general, and Cash in particular, were cool. Obviously, Cash sang about shooting people and getting into fights and getting thrown in jail, and at that time he was associated with the outlaw country movement. But I knew he wasn’t actually an outlaw—he was just a singer. He didn’t even always sing about being a tough guy; sometimes, for example, he sang about political squabbles among bandmates (“The One On the Right Was On the Left” was how I learned that left and right were ideological as well as directional). So, if he was just a guy standing up there with a guitar, what was so mysterious or special about that? I turned it over in my head on long car trips in the back seat while we listened to his cassettes, thinking of him standing on stage (I didn’t know he wore black then) and of people watching him, and wondering what, exactly, they saw when they did.

I’m a lot older now and know my political left from right and why a sheriff might take your pills and what shit precisely you bleep. But why we idolize musicians, or artists of any sort, remains in many ways a mystery. What is it about art that commands worship? Why do we want to revere somebody because they happen to be able to sing? It’s a particularly open question with someone like Cash, who was neither a musical innovator, like Elvis, nor, in any sense, a virtuoso, like Merle Haggard or Willie Nelson, both of whom could sing rings around Cash.

Of course, there are various ways to explain the glamour of Cash. Reinhard Kleist’s graphic biography, Johnny Cash: I See a Darkness, dutifully deploys most of them—a number in the first few pages. Right off the bat we hear from the lips of prisoner and singer-songwriter Glen Shirley that Cash “is our guy.” “The man is a story-teller.  He lives his songs,” Shirley gushes. “And in them you can find every chasm an’ every low of this shit life.”

That’s actually Kleist speaking through Shirley, no doubt; the book casually attributes dialogue where it’s convenient, and makes no pretense to any sort of scholarly accuracy. Still, I doubt the real-life Shirley would have minded too much; Kleist’s summing up of Cash’s appeal is familiar country music boilerplate (“he’s authentic!” “he’s honest!”). Other standard tropes wander through the book as well; Cash is bold and uncompromising! He understands darkness because there is darkness within him! He has suffered!

It’s not that I think any of this is wrong, exactly. Often though, it begs the question—I mean, lots of people have withering drug addictions and do stupid crap, which maybe qualifies as darkness but doesn’t necessarily qualify as special or interesting.

Moreover, in Kleist’s hands, what insights there are all fall flat. This is most painfully evident in the numerous illustrated songs. Kleist provides images limning the narratives of a number of Cash’s big hits, from “Ghost Riders in the Sky” to “A Boy Named Sue” to “Ira Hayes.” The point, I guess, is that since Cash lived through his songs like Kleist/Shirley said, it makes sense to include them in his biography.

The exercise does affirm Cash’s power as a storyteller, mainly through contrast. Kleist is a pretty good artist—his drawing of a young Johnny standing at the microphone, head cocked, preparing to deliver “Big River” is lean and striking. But the effort to show the narrative itself is determinedly bland: Images of the mooning swain and his traveling lover lack the lonesome sparseness of the sung original, not to mention its barely contained, self-parodying humor. The pictures seem generic, taken out of any Twainesque riverboat setting, where the original reveled in its specificity as Cash’s deep baritone caressed each place name and ventrioloquized voice. It’s like Kleist decided to draw the sequence without ever stopping to wonder what made the song worthwhile in the first place, with the predictable result that he gets the general framework and leaves out the soul.

The failure to think things through is evident in the narrative proper as well, in both large ways and small. The decision to mostly skip the 1970s, 80s, and 90s, ending the story with a reverent glimpse of Cash chatting with the sainted Rick Rubin is, I guess, inevitable, but still irritating. Similarly, a brief sequence with Bob Dylan had me gritting my teeth. The dialogue itself, seemingly lifted from session tapes, was interesting enough (after hearing “A Boy Named Sue” Dylan calls it “funny but a little silly.” Pompous prick). But the context of the encounter, and the work it does in the story, is facile. Dylan points out the evils of Vietnam and attempts to get Cash to smoke some pot. Cash defends the GIs, avoids the philosophical discussion and sticks with pills.

So we’ve got the liberal rebel who knows the world and the more plodding everyman with a conscience, the two burying their differences and making common cause across the bridge of music. Which, again, isn’t categorically wrong, but does finesse the point that they’re crossing that musical bridge in no small part because Cash was a huge Dylan fan. In one of his autobiographies, in fact, Cash talked about playing The Freewheelin’ Bob Dylan over and over obsessively—listening to it all day up to the moment he went on stage to do his own show, coming off stage, and immediately putting it on again. Cash covered a number of Dylan songs, too, and his version of “It Ain’t Me Babe” is, to my mind, inarguably better than the original, veering from bleak poetry to over-emoting silliness in a way that the supposedly-mercurial-but-actually-in-general-fairly-monotonous Dylan never did.

Dylan’s a recognized pop music genius, and putting Cash next to him is clearly supposed to be validating. But, at least for me, the whole sequence actually obscures what’s worthwhile about Cash. I guess that’s inevitable. The reason you like an artist is the art; staring at the man or woman behind it is kind of the definition of missing the point.

I wish Kleist had managed to get at a little more of what I love about Cash—the achingly sublime contrast of jaunty Banjo and Cash’s halting hum on “Any Old Wind That Blows”; the bizarre detour into aborted self-immolation while wearing duck-head overalls in “Beans for Breakfast”; the way his deep, ragged, almost spoken vocals contrast with Anita Carter’s angelic tone to make his version of “Were You There” one of the two or three greatest country gospel songs of all time; the way his deep, ragged, almost spoken vocals contrast with June Carter’s sexy growl to make his version of “What’d I Say” perhaps the most gloriously, hilariously failed white soul song ever. And, yeah, the way that a seven-year-old could learn right from left and what a curfew or an amphetamine was by listening to him, just because his music was so filled with stuff and so engaged with the world. I See A Darkness sounds sexy and cool and all, but really the guy saw all sorts of things. That doesn’t make him a romantic icon, necessarily, but it sure makes his songs fun to listen to.