What’s a bucking bronco got to do with it? 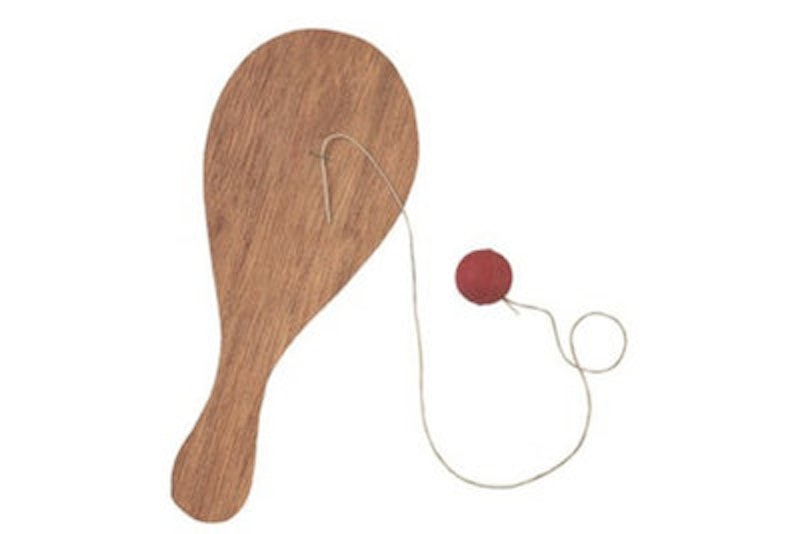 I grew up swimming in newspapers spread out on the rug because my pop was an editor. Morning and evening editions accumulated like coal dust at a miner’s house. I compulsively read the papers like I read breakfast cereal boxes and my elbows were always ink-stained in the way that knees of more well-rounded children were once stained by grass.

It wasn’t what you might think. My parents didn’t encourage me to read newspapers, books, or anything else that was typically considered good for children, in the manner of mental vitamins. They did encourage me to tie my own damn shoes. Aside from that, my parents had other fish to fry.

Nah, I just read stuff. Like a tic, really. Not for points, grades, or anything grand as a thirst of knowledge. Reading the paper was like slapping a Fli-Back, the cheapest of toys, sharing the bottom shelf with balls and jacks and bubble juice. Yeah, that thing—sorta Ping-Pong For One, consisting of a crude plywood paddle and red rubber ball, each stapled to an elastic cord. You got a rhythm going. Like so much in life, you got a rhythm going, and then you died.

My first rhythm was reading the papers, beginning with the funnies.  Which weren’t funny. Funnies have no more to do with funny than repeating the same word over and over until your brother, your sister, your mother, your father, anyone in earshot screams bloody murder. Which is, of course, funny.

After the funnies, I gave the front page a good vacant stare. Anything about A-bombs, H-bombs, jet planes, rockets, missiles, satellites and astronauts. Doing so, you could not help but accidentally learn something, true or false, about Russia, Republicans, Democrats, and the Great Cranberry Scare of 1959. From the Jiggling Jelly of Red Death to the hole in Adlai Stevenson’s shoe, apocryphal factoids hooked themselves like burdocks to your brain.

Done with that, I switched to scan mode, bang-bang-bang. Skipped the women’s section. Checked the movie section for new monster movies. That left dawdling in the sports section only long enough to note the standing of my Yankees. Before I could read much, my dad was a sports editor and wrote a column, so I’d just note his picture and name and associate them with the goofy leftover decorated cakes he’d bring home from local sports banquets. Nothing like a whole sugar rose popped in the mouth at six in the morning. This Early Bird got the spoils.

By the time my reading skills improved, my father moved up to having his name on the editorial page. Big move. We moved from New Jersey to upstate New York, into our family’s first house. He bought a new Cricketeer suit and—freaked us out—a fedora. It was an Adam hat, I remember that. Our eyes rolled higher than an elephant’s on the Fourth of July and within a week the hat was disappeared to the back of my parents’ closet, appearing now and then on the head of a Halloween bum.

I’ve outlived my father by 35 years. I wonder if he’d so much as smirk at this self-indulgent story. Our big family joke was the dinnertime when he once sneezed a pea out of his nose. That might seem like random absurdity, but in context it was transcendental Dada. My father lectured us bunch of little kids about the proper use of prepositions when making reference to petard hoisting. Like, is one hoist by or on one’s own petard? Surprise, I got a block about that.

Over tuna casserole and tinned fruit cocktail, he also regularly visited the gauntlet/gantlet controversy. That distinction stuck. As you might expect, my father didn’t put much stock in usage, except perhaps his own—capriciously spun from a very personal manual of style. The guy totally owned my goat. He pretended to insist on the English pronunciation of garage, but jeeze, he pretended hard. Sometimes he made me scream bloody murder. And then there was hell to pay.

Very few times did I read anything my father wrote off-duty. His oeuvre was editorial, usually state and local politics, so I tuned it out. Like lives of many Depression kids, my father’s included lots of life and death, unlike my suburban sleepwalk. He had plenty of grist for his big old black Underwood mill and joshed about pecking out a book recounting his German POW experience, but never got around to it.

He did get around to keeping up his Fli-Back game. We TV-spoilt kids would sometimes buy the paddles mysteriously printed with a 1930s clip art bucking bronco and immediately get bored. That’s when dad would take over and knock out a few hundred consecutive reps. Later on, when one or another of my younger siblings tossed a new Fli-Back aside, I the teenager gave it a few slaps for old times’ sake and gave myself a shock. I got a rhythm going. I could do this! And it didn’t take long for my dad to notice and throw down the gauntlet.

Didn’t take more than a day or two before we both passed a thousand Fli-Back reps in a row. Never mind Guinness Record competition, I’m sure a grand wouldn’t merit a second look by a sandlot scout. Nevertheless, I rode my tiger of opportunity. My dad’s technique was nonchalant, while I kept an edgy focus. He gave me heat, tried to rattle me, smoked a Parliament and blew a fatherly second-hand ring in my direction. And while I tasted blood, I sensed he was losing interest.

I don’t remember who finally reigned as Fli-Back King. All I know is, once or twice, I got a rhythm going.