Wayne would be a perfect fit in today's Republican Party. 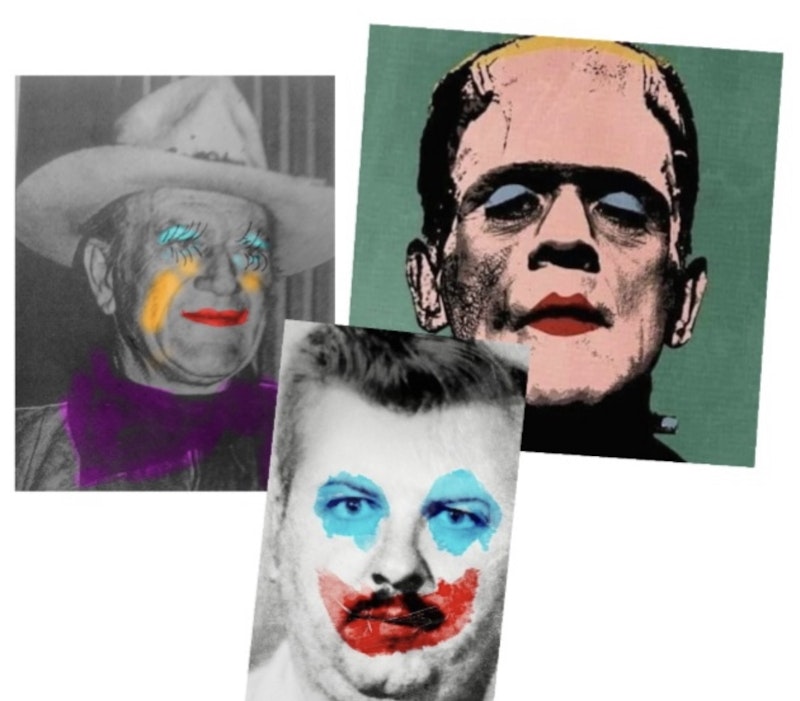 America manufactures only the best monsters. Classic Hollywood monsters are predictable. You have run-of-the-mill creatures like vampires, zombies, ghouls, ghosts, trolls and mummies. Top-of-the-line brutes and beasts like Frankenstein, King Kong, Dracula, and the Wolfman are biggies. Demons and witches are hiding under every bed. Every closet holds a skeleton. Some horrible creeps aren't so obvious, congregating among us in broad daylight. They live mundane everyday lives. They run for and hold on tight to high offices, teach our children, and preach in churches. Many are loved and respected.

The movie star John Wayne is one of those vile monstrosities. He’s considered by some as an example of true grit and authentic American pluck. A faithful patriot. A white man's man among white men. The hero of war movies and westerns. He adopted the nickname Duke from his childhood pet dog. He was the idol—an exemplar pillar of Society. John Wayne was a golden God to many with his signature swagger, deep manly voice and boisterous he-man bravado. Although he died in 1979, his mythic legacy marches on.

It's no secret Wayne was a bigot and unapologetic racist. Generations of God-fearing patriots embrace his white supremacist attitudes and right-wing "Christian" views. He's said the classic film Midnight Cowboy was a "perverted film about two fags." He viewed blacks as poor, uneducated second-class citizens and irresponsible lesser people. He believed Americans shouldn't kowtow to minorities. He hated hippies too, who he called whiners and bellyachers. Wayne had nothing but contempt and disdain for draft-dodging cowards and spoiled, entitled brats. Sometimes he’d scream at the "long-haired dirty barefoot freaks" driving around Hollywood in his Cadillac convertible. I can imagine Wayne yelling profanities and directing his pent-up hate while puffing on a cigarette. Wayne would be a perfect fit in today's Republican Party. If he were alive now, he’d likely be running as their next presidential candidate. He’d serve up his special kind of Western justice with a good public hanging, firing squad execution, or a shootout duel at high noon.

A friend recently commented on Wayne's stature: "Don't judge him too harshly; I think he was a latent drama queen. No cowhand ever walked like that in cowboy boots. I believe he wanted to be Mae West, and she always wanted to be Catherine the Great." He sashayed across the room, his girlish swivel hips swaying to and fro like Elvis. Maybe he had a load of shit in his man diaper. "Listen up, pilgrim, we got a war to win, but first the Duke’s gotta go dukey." There's a memorable scene in the cult film Repo Manwhere the grease monkey mechanic retells a story of installing two-way mirrors in Wayne’s Brentwood home. "John Wayne was a fag. What? He would come to the door in a dress." The other men in the motor pool garage lot all agree that's okay; he's just in drag, they retort. There's a Bukowski poem where a bunch of winos are standing around passing a bottle at a barrel fire. One wino says, “John Wayne won it.” Another replies, “Won what?”

But there are worse monsters than unchecked machismo, like that tough-guy stance where you cut and paste a Trump head onto a Rambo body. Riding atop a Sherman tank or in the back of a pickup truck while waving Old Glory. Riding your horse at full gallop with the bridle reins clenched between your dentures while simultaneously rapid-firing a Winchester rifle in one hand and a six-shooter in the other, killing fake Indians. This scene is what makes America great? I have no clue how many red-blooded mothers and fathers named their newborn babies after John Wayne.

Two namesakes that I know of are serial killer John Wayne Gacy and John Wayne Bobbitt. The latter’s bizarre claim to fame was having his dick cut off by his jealous wife, who then threw the bloody dismembered member out her car window while driving away. Eventually, the penis was recovered from the roadside and surgically reattached.

Recently there was some disturbing news about renaming the John Wayne airport in Orange County, California. Some red-blooded all-Americans think a homophobic closet queen racist shouldn't have a public transportation hub named after him. I'm all for it. Call it the John Wayne is Still Dead Airport.