In India, modernity and tradition don't clash, they meld 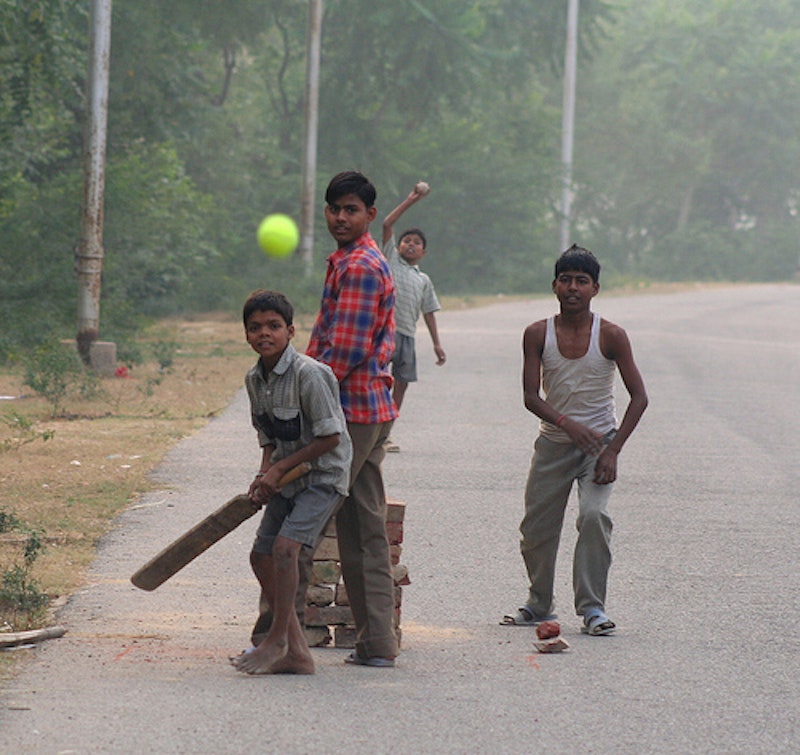 The burgeoning prevalence of fast-food chains and video game culture is often bitterly dubbed the "Americanization" of nations-the spread of alluring, mass-produced culture subtly breaking down societal norms. Here in India, though, this anti-American bent is absent. The phenomenon is generalized to "becoming more like the West." And while people are nervous about clogged arteries and kids staying inside, they seem thrilled at the new opportunities.

What is frankly bizarre about India is how its relatively new global upper-middle class, with all the familiar trappings of modernity that go with it, interacts with a distinctly non-western history and culture. This isn't to be confused with the startling contrast between the tent villages and tin huts across the street from the security gates that cordon off upper-middle class neighborhoods. This is the existence of ancient culture within these middle-class communities, the cows grazing in front of the electronics store, if you will. Within this thriving middle class, the millennia-old cultures of this region are adapting to modernity but are by no means being replaced by it.

Globalization may have brought with it a taste for Subway and Budweiser, but it hasn't included Western values and family structure. This is to be expected, I suppose, as the value systems and family structures from cosmopolitan nations like Japan also seem unperturbed by the influence of Western culture. But it's the next step of societal norms, the place where quasi-moral-relativism lurks, that I find so interesting here. The worldly intelligentsia and bourgeoisie of many developed and developing countries have seemingly embraced secular liberalism and the breakdown of existing social prejudices and rigid norms-let's call it The Economist syndrome. But within this worldly Indian upper-middle class, the existing order still has a major say in the way people interact with each other.

Perhaps the most jarring instance of this is India's social caste system and culture of arranged marriages. Even in high school world history, the caste system and arranged marriage was the basis of my education regarding South Asia. I went nearly two decades of my life without learning about the horrors surrounding Partition, the violence and brutality that occurred when India split into India and Pakistan in 1947. I didn't learn about one of the worst tragedies in the 20th century.

You can imagine my shock when multiple people began openly talking to me about their caste, others' castes and the relative importance of this background. I knew that castes still played a major role in the political sphere (look no further than Mayawati, but I thought it was a preoccupation of lower castes,an awful historical blemish, unmentioned by the upper caste perpetrators.

To be clear, the caste system isn't as severe as I'd been taught to expect in middle school. "Untouchables" (now known as dalits) do not walk the streets with brooms cleaning up behind you. I have upper-caste friends in much worse financial shape than middle-caste friends. If you didn't know better, you'd have a tough time finding caste, especially in the workplace. But it's there in people's heads, even if it doesn't play out quite like you'd expect. I've met a lot of people from the middle and upper-middle classes but have yet to meet anyone with a dalit or lower-caste background.

My friend Sumit was telling me the other day about cricket games that used to go in the field next to his house. He said the field was reserved for more important games like those against kids from other villages, games between families, and games between castes. Wait, wait. What was that last part? "Castes," he said. Apparently castes play cricket games against each other as children. This tradition, with potentially troubling social ramifications, is also the basis for pick-up games.

But arranged marriage, which seems so foreign, is a real part of life. Sumit told me he was happy about it. He said his parents had been around a lot longer than him and would know how to choose a wife better than he would. He also said it helped ensure that he found a wife in the same caste. Also, marriage is the joining of families, he said, so it's important the families like each other. If he did happen to fall in love with someone, he said he could always tell his parents and have them see what they could do about the situation.

Because of the Western taboos surrounding these institutions, I am still unnerved when the topics are openly discussed. It feels like talking about race in America, a bit uncouth, a bit prejudiced if you're not careful, but I'm projecting. I haven't encountered people that seem to think about it that way. People in the West have been decrying the decay of culture at the hands of globalization since the French enacted anti-Hollywood-film laws 90 years ago. People here haven't expressed to me anything other than pure joy regarding global culture's rise in India. People are excited about the things that are coming here. Yet, caste and arranged marriage carry on. Maybe that's why no one seems to resent America, the perceived purveyor of globalization-the influence only goes so far. Maybe it's too new. Maybe Indian culture is exceptional. Or maybe it's just a matter of time.