Without Scary Stories To Tell In The Dark by flashlight at sleepovers, you did childhood wrong. 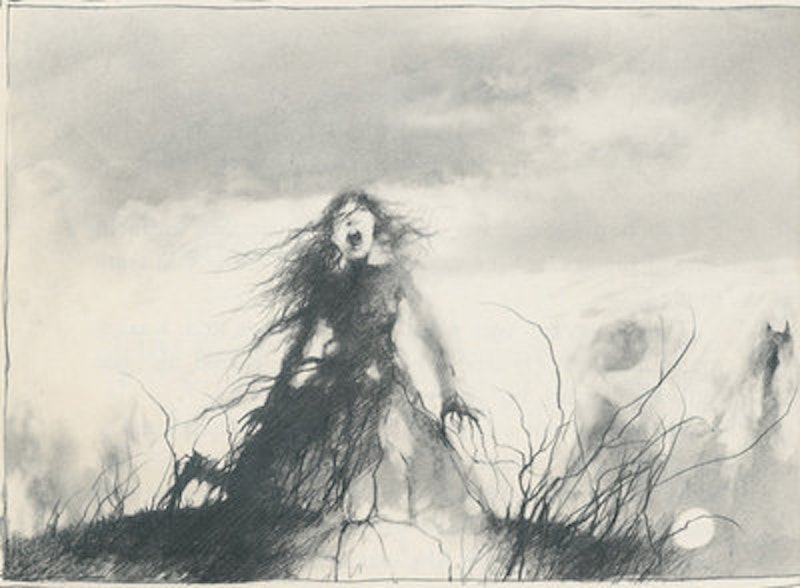 Scary Stories To Tell In The Dark and its follow-up More Scary Stories To Tell In The Dark by Alvin Schwartz were always my favorite books to read before Halloween. I’d pull out my copies and invite friends over to hold them hostage while I fed them candy corn and insisted on reading every story. If you weren’t telling these tales by flashlight at sleepovers, you were probably doing childhood wrong.

These stories, I’ve learned, can teach you a lot about life. They’re written for the younger crowd and are surprisingly dark and teach you that at any given moment you could have a Bruce Willis/Sixth Sense revelation that you’re dead. They also teach you to trust no adult because in almost every story the parents turn out to be liars. Here’s to Halloween, and five stories.

“Me Tie Dough-ty Walker!”: It’s reported that every single night a severed head falls through the chimney in an old haunted house. A gross old man offers a young man $200 to spend the night in the haunted house. The boy agrees as long as he can bring his dog. Throughout the night the boy hears a frightening song of “Me tie Dough-ty Walker” from the chimney in an eerie voice. The dog is a dick and sings back in its creepy dog-bark. Eventually a head falls through the chimney and kills the dog due to shock.

Take Away Lesson: Contrary to everything I tell myself about being home alone at night, having a dog won’t protect me. I’m essentially screwed no matter what.

“The Thing”: Two friends, Ted Walker and Sam Miller, are sitting on a fence one night talking when they see a man stand up out in a field and walk towards them. Instead of running away, the boys decide to get closer. Ted strolls right up to the corpse-like man and begins to scream. The boys run back to Sam’s house where the creature stands outside for a while watching them. A year later Ted grows deathly ill and dies. On the night he died, Sam swore Ted looked just like the skeleton they saw.

Take Away Lesson: Don’t approach strange men: they could be disease-carrying zombies.

“Cold As Clay”: A farmer’s daughter fell in love with a man with whom her father did not think was good enough for her. To keep them apart, he sent her to live on the other side of the country. During their time apart, Jim, the man she fell in love with, grew violently ill and wasted away. The father was too ashamed to tell his daughter that her beau was dead. One night, the daughter gets a knock on the door and Jim is there, telling her that her father has called. On the ride home, Jim gets cold and the girl decides to wrap her handkerchief around his head to keep him warm. When the girl returns home, her father says he never called and that Jim has passed on. When they dig up Jim’s body they find the girls handkerchief still firmly wrapped around his head.

Take Away Lesson: Your boyfriend may be dead at any given time. Pinch his butt often to make sure he isn’t. He may also steal your cute clothes.

“Something Was Wrong”: John Sullivan finds himself walking down a street and has no idea how he got there. He asks people where he is and what time it is, but all of them run away screaming. After trying in vain to hail a taxi, he calls his house. A voice he doesn’t recognize answers the phone and tells him that his wife is at a funeral—his. John Sullivan discovers he had died yesterday in a downtown accident.

Take Away Lesson: If you wake up and don’t know where you are and a ton of people end up screaming while running away from you, you’re either dead or on a new level of hung over.

“The Wreck”: Fred and Jeanne are two young cuties who meet one night and decide to dance with each other. At the end of the night, Fred offers to drive Jeanne home. As they drive along the road, Jeanne absent-mindedly points to a tree and says, “I crashed my car into that tree once. I must not have been paying attention.” Fred thinks nothing of this and when Jeanne gets out of the car says, “Would you like to go out sometime? Maybe to a movie or something?” Jeanne agrees and takes some tinsel Fred gives her and places it in her hair. As Fred drives away, he realizes he doesn’t know Jeanne’s last name or telephone number. Circling the car around to go back for her, he sees a car crashed into a tree with smoke billowing out of it. When Fred approaches the burning car, he sees Jeanne dead in the driver seat… the tinsel he gave her wrapped around her head.

Take Away Lesson: Dating is really fucking hard and we should just give up.

Illustration by Stephen Gammell from Scary Stories To Tell In The Dark (1981).