Thoughts on family, alcohol and Thanksgiving. 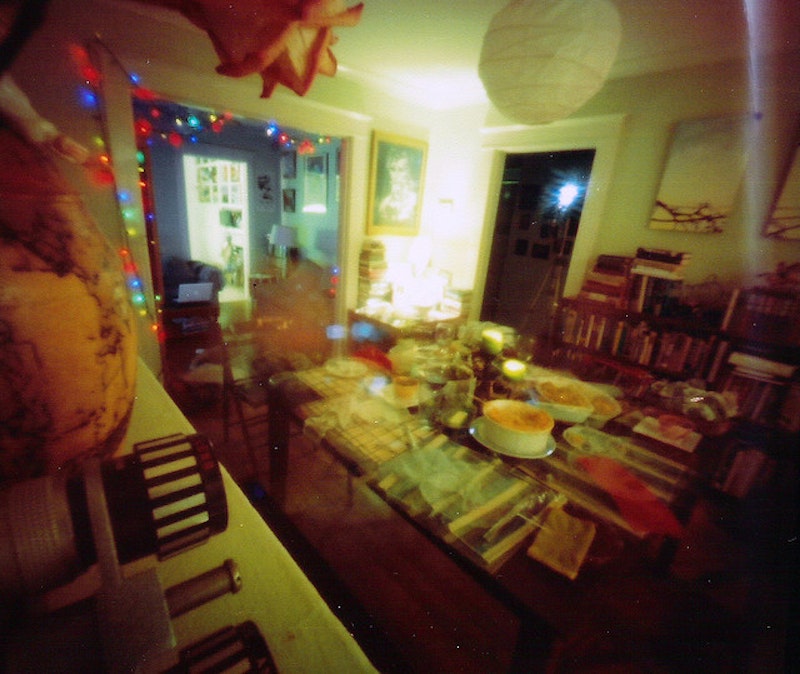 This year, Thanksgiving is at your house. You thought that your first time hosting a holiday would feel momentous, like buying a first dishwasher or pledging to NPR, but you haven’t actually bought a dishwasher or donated to NPR. Rather, your parents are renovating their kitchen and your brother is with his wife’s family and your sister has to work, so your parents come to your house for a Thanksgiving for three. They not only bring the entire contents of their refrigerator—including two heads of lettuce and an unopened jar of mayonnaise—they also bring a charcoal grill and several rolls of toilet paper in case you ran out and were planning on going through the coffee filters first. They also bring their own booze.

Holidays are about getting drunk with people you love either because you want to or because you have to. Over-pouring the Pinot and confessing that it was you who broke the Victrola 10 years ago, not the Guatemalan exchange student, is as much a part of Thanksgiving as mashed potatoes and stuffing. Or, at least, it was. You no longer participate in the imbibing because you don’t drink around your parents. The reason for your familial sobriety is because you made a grand mistake two years ago after your girlfriend found out you cheated on her more than three times. She was white-washed when she found out, shocked, like the person she shared ice cream and washed the dishes with her was a mirage, a stranger, a non-person. You decided then that you are either a fundamentally bad person or an alcoholic. Alcoholism seemed easier to cure than a black soul, so you called your parents in the midst of a metaphysical hangover and told them that you are a drunk, and, not only that, you have been since you were 18 or maybe 12 or maybe even when you were still a parasite in the mobile home of your mother’s womb.

There are a lot of things you can take back. I love you. We should get a dog. No, I’ll get the check. Who hasn’t taken back these words? But, I’m an alcoholic is the pinkie swear of confessions, the nickname you can’t seem to shake. And because you never actually stopped drinking, you pretend that you’re comfortably saddled to the wagon around your parents. Your dry liver is an obvious counterfeit when your parents look at your recycling bins when they come up for Thanksgiving, but you attribute the empties to your roommate and they believe you because they want to believe you. The only time your father overtly asks about your drinking is when you’re picking up last minute cranberry sauce at the grocery store and a bartender picking up last minute greens yells, Dude! You have to stop walking out on your tab! when he sees you across the produce section. You tell your dad you drink soda water and eat bar nuts and sometimes forget to pay.

It’s a lie, those glasses of water and handfuls of nuts. You actually spend a lot of time at one bar, your neighborhood bar, an everybody-knows-your-name bar. You spend more time there that at your own house. Is this sad? Sometimes. Sometimes not. You’ve had exceptionally fun nights at this bar: nights when you dance around the pool table and pour beer on your head and stumble home, a walk you won’t remember in the morning. There are touching moments at the bar, like when a rainbow arcs over the sky and everyone walks outside and stands and blinks at the colorful yawn above. But despite the occasional monkey barrel nights, bar culture is measles for certain aspects of your life, like, for instance, your bank account, which you’ve stopped paying attention to because the daily bar charges make you feel like what you’ve decided that you’re not: an alcoholic.

But can you decide you aren’t an alcoholic? Maybe not. Maybe as soon as those words exit your mouth, they are always and forever true. After your mistaken announcement to your parents, you started thinking about drinking all the time. That is the worst part of thinking you’re an addict: it’s boring. You are always aware of the hour when you would usually go to the bar but are not going to go to the bar, definitely not, unless this coin lands heads up, in which case you will take it as a sign that you should drink. You attended a couple of AA meetings after your mistaken announcement but hearing people talk about booze made you thirsty. Some people say that they aren’t into AA because of the Jesus thing and you agree that putting your problems and fate and your glass in the hands of an invisible man who lives on a cloud is like expecting Santa to fit that pony down your chimney, but you mostly hated the meetings because you didn’t want to be one of the those people. You didn’t want to see yourself in their stories and their sadness and their sobriety. So you kept drinking and if you didn’t drink one night, you woke up elated, not because you were clear-headed and pain-free, but because a sober night deserves a party, and what better way to party than to party?

Recovery programs talk about addiction as a disease, but you know it’s less the flu and more your inability to recognize your own humanness, to recognize that you are a living being who will someday be a dying being and then someday a non-being, just scattered cells and quiet atoms. This is what addicts don’t accept: their own unshakable death. This is surprising considering that they see the symptoms of physical demise when they wake up cloudy and heavy. It’s not just their hands that shake, it’s their brains, a Parksonian tremor that slows after the first 15 minutes of happy hour and stops when happy hour has passed but you’re still at the bar.

You hardly ever get that tremor, usually only on Sunday mornings, and, besides, you’re too young to be an alcoholic. But you can’t take it back. This is why you don’t drink in front of your parents. It’s easier to lie, to say that you don’t drink, than to say you are not an alcoholic. So you fake it. Perrier at dinner, bourbon when they are snoring in your guest room.

Your Thanksgiving might have been small and the turkey might have been grilled, but you still said your blessings and recited your thanks. To good friends and good health and good luck. Afterward, you wonder if you will toast with sparkling grape juice at every Thanksgiving. Will you never again get drunk at a family reunion, one aunt passed out in a lawn chair, another dancing a little too sexy, a grandfather lost in his glass? Or will you someday know, really know, that is wasn’t true, that you were never an alcoholic, the tremors were imaginary, that it wasn’t a disease, it was a mistake. Maybe after you buy the dishwasher and donate to NPR, you will be able to tell your parents this, and maybe the next time Thanksgiving is at your house you will hold your glass in your hand, lift it to your mouth, and toast to friends and to health and to luck and to parents who bring their grill and their toilet paper and their belief in you.