From the Expense Report Files 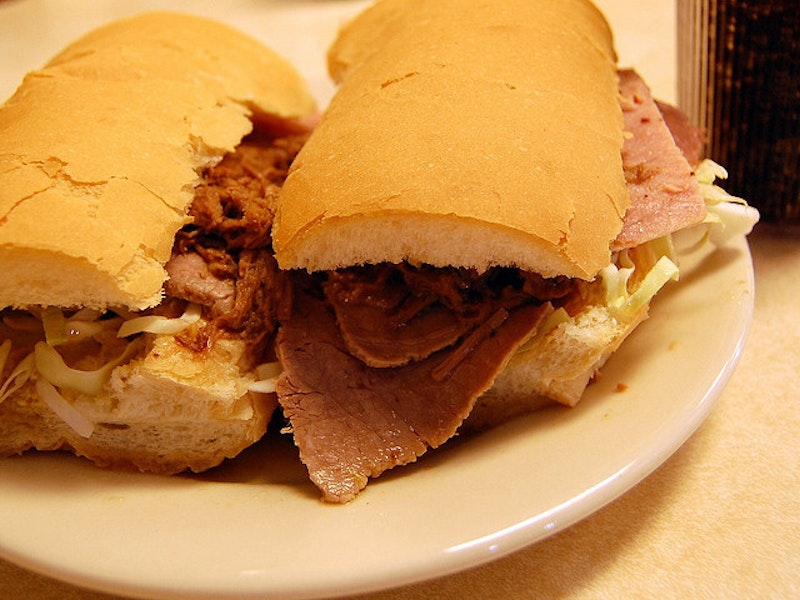 Item 12b. Please provide a narrative summary of your travel. State specifically how the travel helped achieve academic and professional goals.

I passed through the slobbering inanity of the airport like Orpheus departing the underworld. On the plane an infant smeared what I hope is chocolate on my sports coat. It dried. Beneath a thrumming overpass I waited in a queue for a taxi. Outside the airport New Orleans provides a seemingly endless supply of strip clubs, pawn shops, and bodywork places, counterpointed sadly by filthy public-service billboards urging healthy eating and temperate family life.

My cab driver, who had lived in the city for 60 years, brought up Hurricane Katrina without my asking. He told me of his brother who moved to Memphis after the hurricane crushed his house, and how his brother tired of Memphis (this did not strain my credulity), and how his brother demolished his old house in New Orleans and on the same lot built anew, and how he lives there still. We crawled along the highway—the cab was a GMC Suburban, overlarge and cool. WHO DAT screamed stickers on every vehicle. WHO DAT shouted banners, placards, graffiti, neon signs, animated come-ons, pennants streaming from the tops of offices, shirts; baby onesies altered the slogan to POO DAT.

The cab driver pointed to deserted warehouses and abandoned churches as we drove slowly by. See that brown line? he asked. That’s the waterline. Closer to downtown we passed a huge humming brick building perforated with enormous bays. He explained that the city stored its cable cars in there, and that it had flooded and the cable cars had all been ruined. Over years they restored them—they piled the rails still, up and down the central artery of the city. He told me, those are the nice ones with AC. The sun set and lights came up. Are you sure you want to get into this mess? he asked as we parked in front of the Sheraton. I could see the careful dishabille of the FASHSS attendees as they spilled onto the sidewalk and strolled proudly out of the hotel seeking the real New Orleans. Many of them still wore their nametags.

In the lobby my colleagues thronged. Chet Manford was staying down the street at the Ritz and he had inaugurated a new mind game with me by changing his cell phone number. In the catalog his curated session had been marked with black bars. It listed neither a time nor a location. As I waited for the elevator I watched a weasel-faced woman and a dumpy man, their nametags both turned towards their chests from an accident of motion or a desire for anonymity (or perhaps one of each). They discussed dinner plans, late dinner, which they turned over and stroked in their conversation as if it were a rare and transgressive delight, like an orgy. In the center city, the weasel-faced woman said, crime statistics are actually below the national average. Her companion nodded. I thought of the line from Alphaville—“men have become the slaves of probability.” He was wearing horrible square-toed elastic-gored loafers, in a plastic-shining corrected grain. Black, against his pale chinos. What the fuck is he doing at the FASHSS?

Something white was growing on the rug at the end of the hallway, or perhaps it was a discarded towel. My key malfunctioned on the first five swipes. In my room the message light blinked; there was a tang like fresh cigarette smoke in the air, and a hint of soft incense, maybe perfume. I looked out over the city—a rooftop swimming pool, the casino, the aquarium squatting by the river. Ships hooted in their huge-but-far-away voices.

The sink proved dry, as did the toilet and then the shower. I looked through the room service menu as I waited for the voicemail message. The phone smelled like crayon. Three varieties of po’boy and a Kobe burger. The message began, Valued guests of the Sheraton. Something had gotten into the city water supply, the manager explained. Drinking water needed to be boiled; as of now, bathing was unsafe. At two a.m. they turned the water back on and told us we could flush our toilets and take showers if we needed to. The faucet coughed into the sink. In the light of a two a.m. bathroom anyone looks dramatic. I dabbed at the stain on my sports coat with a washcloth.

Sessions in the morning, walking in the French Quarter during the day. White blots of fungus on the streets, people throwing slops from the wrought-iron balconies, as if just for me as I walked by. After a few hours my Macneil brogues began to pinch and I thought, maybe there’s an article in this, something about toeboxes and suffering, maybe I should re-read The Movie-Goer, figure out what kind of shoes Binx wore. Tourists staggered around, or walked if they had children with them. I saw nametags as far away as Jackson Square. Linda Fiorucci-Mackintosh stared at her dining companion (Dean Farquar, who looked like a predatory insect; Bally loafers) as I walked past. Little cruelties.

I took a long nap.

At night out with the boys from Narthwestern, reeling along down Bourbon St. A group of evangelicals had erected crosses and were preaching damnation while two pale white girls beat a steel drum. As I watched they hauled a reveler up onto one of the crosses, and he hung there, hands gripping metal holds, straining while his friends held his plastic grenade for him (White tennis shoes; the friends wore flip-flops). I was drunk, in a stupor. Hey man, have you heard about muffaletta? a little blond tourist asked, his accent drawling and Norwegian. It’s a great sandwich, the best in the world. Fungus glowed down side-streets.

At Lafitte’s Blacksmith Shop we watched a group of middle school girls get drunk while the bartender hacked aimlessly with a machete at a giant beetle. It must have been four feet long. People set their drinks on it. Sticky little hooks barbed the meat. A laughing group of frat boys (mostly Sperry Topsiders, a few non-branded boat shoes probably from LL Bean, and I think one pair of Quoddys) bought tranches of beetle flesh and hung them from their shirts. WHO DAT, WHO DAT, WHO DAT? asked the bartender, in time with his cuts. The beetle’s antennae twitched. Outside the girls played their steel drums, rat-tat-tat their sticks beating. A brass band was playing somewhere; other brass bands were playing elsewhere.

A man dressed as Satan led a ghost tour. As he gathered his charges white hands reached out from behind a grating and snatched one of the tourists and disappeared, the grating silent and oiled swung closed, the scene lit by gaslight. No one noticed but me. Someone pressed a sticky plastic cup into my hand, Blue Moon I think with a rind of something bitter floating in it. We passed the steel drummers and they danced hands around one another’s’ hips. Outside Margaritaville we found the frat boys from Lafitte’s, standing in a ring around one of them who was convulsing and vomiting yellow foam. Palmetto bugs flew in a clean, sharp spiral down from the streetlamp onto the foam, lighting like dainty little ships. My sports coat was missing; I must have left it at Lafittes.

We sat in a po’boy place eating po’boys from paper plates on sticky tables. The light buzzed and was green. The only other customer was a leathery thing that slurped chopped gyros from a cup. One of my friends from Narthwestern had a pair of Trickers bluchers and someone had smeared what looked like green plumbers putty on them. He dabbed at them with a paper napkin. Everyone sweated. White fungus blotted the window. In the street we heard ambulances, fire trucks, police, more ambulances. Chet walked in with two very beautiful women at whom I tried not to look, and he handed me a blue felt shoe bag inside of which was a pair of Church’s Grafton brogues in an exquisite chocolate-brown box calf, that as far as I know you can’t even get. There was a receipt with them but the actual price fields were blank. Hope you’re having a great night, he said, and left.

RESPONSE FROM AUDITOR: If you shared any of the meals you describe with colleagues you must indicate this in the comprehensive meals accounting in Item Four.