Eyes and Years on Greenpoint

Unlike vast tracts of eastern Queens, Greenpoint is an old neighborhood with old things to see, as well as new construction for contrast. I’ve never been bored in Greenpoint. 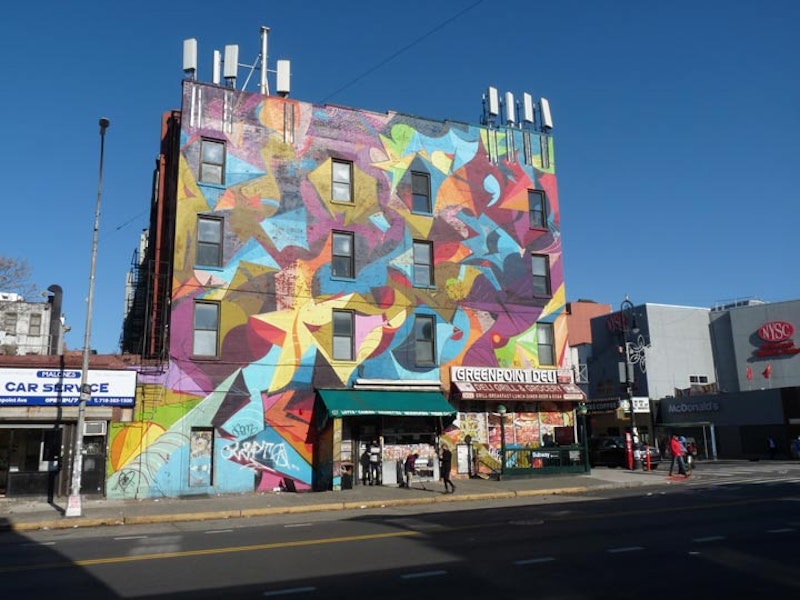 I scuttle about the streets of New York City like a rat in a Chipotle, photographing ancient signage, rusted bits of detritus, faded ads for businesses that went belly-up decades ago, and then head home and write about them in my website, forgotten-ny.com. It’s been a fun 21 years, and along the way I authored a book for HarperCollins, co-authored another on Arcadia, led over 150 tours with anything from five to 65 tourgoers, and won the first Best Website award given by the Guides Association of New York City. I prefer to remain anonymous, though, and non-inviting to brigands or attackers. My worn camera bag was purchased in 2009, and my re-stitched Robbins Men’s and Boys black, fleece-lined jacket was acquired on Myrtle Ave. in Ridgewood in 1992. As my old bosses would say about me, it gets the job done without distinction or excellence.

I’ve often found myself in Greenpoint after a long time away. Unlike vast tracts of eastern Queens, where I’ve lived since 1993, it’s an old neighborhood with old things to see, as well as new construction for contrast. I’ve never been bored in Greenpoint. When I was a foolish youth, I once took an apartment there with the bathtub in the kitchen. This was a step too far for me in the end, and I got out of the lease.

Originally named for the forests that used to cover this northernmost section of Brooklyn, Greenpoint hasn’t been green since the 1830s, when it was the site of a wave of development that made it a hub of industrial activity. Its now near-barren shores became home to shipyards, followed by factories and heavy industry. Greenpoint became home to the so-called five black arts: printing, ceramics, oil refining, glassmaking and ironworking. This is where the Monitor, the cheese-box on a raft that fought the Merrimac to a draw at Hampton Roads in the Civil War, was built.

By the 1830s, the steamboat gave Greenpoint greater accessibility. In 1832, Eliphalet Nott, president of upstate Union College, and industrialist Neziah Bliss purchased 30 acres along the East River and were soon followed by other shipbuilders and manufacturers. Mayor Ambrose Kingsland, rewarded by an avenue named for him, and politician Samuel Tilden were also amassing property in Greenpoint.

Beginning in the 1890s, the Polish arrived in Greenpoint, attracted by factory jobs, and in the 1930s, a second wave from Poland came, escaping Nazi Germany. Ironically, before the Poles, Greenpoint was a German and Irish stronghold. After WWII, yet another Polish wave arrived as the Soviets took control of Eastern Europe. 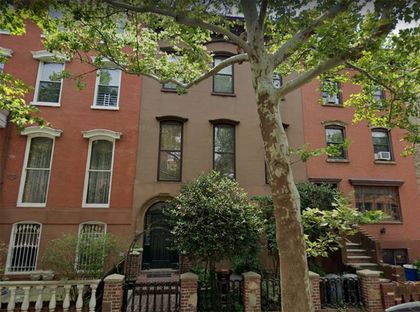 Neziah Bliss, a protégé of Robert Fulton, was an early steamboat pioneer and owned companies in Philadelphia and Cincinnati. Settling in Manhattan in 1827, his Novelty Iron Works supplied steamboat engines for area vessels. By 1832 he’d acquired acreage on both sides of Newtown Creek, in Greenpoint and what would become the southern edge of Long Island City. Bliss laid out streets in Greenpoint to facilitate his riverside shipbuilding concern and built a turnpike connecting it with Astoria (now Franklin St. in Greenpoint, Vernon Blvd. in Queens); he also instituted ferry service with Manhattan. Though most of Bliss’ activities were in Greenpoint, he’s remembered chiefly by Blissville in Queens and by a stop on the Flushing Line subway (#7) that bears his family name: 46th St. was originally known as Bliss St. Bliss lived in this building at 130 Kent St. 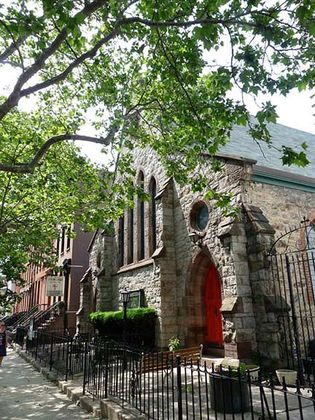 The Episcopla Church of the Ascension, 121 Kent, was organized in 1845 and built in 1865, making this Greenpoint’s oldest church. In 2012, the Church of the Ascension held a memorial service for the ironclad Monitor, built at the Continental Iron Works in Greenpoint. After the church service, about 100 people marched in a parade down Manhattan Ave. through Brooklyn. Led by police escort, four llamas, Boy Scouts, Sons of the Civil War members, women in period dress, local politicians, and others.

The parade ended at the original site of the Continental Iron Works from where the Monitor launched. After the raising of the flag and the national anthem, there were speeches, a salute by the fire department's fireboat, and a 21-gun salute by the Sons of the Civil War. 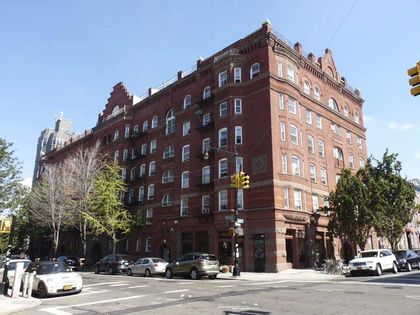 If you’re in the area a glimpse at the Astral, which takes up the entire frontage of Franklin from India to Java, is almost mandatory. Van Morrison recorded Astral Weeks, and the band Nektar, had a minor hit with Astral Man in 1976, but undoubtedly Brooklyn’s claim to Astral fame is this handsome, distinctive apartment building built in 1885 as living quarters by Charles Pratt for workers in his Astral Oil Works. Astral Oil’s slogan was, “The holy lamps of Tibet are primed with Astral Oil.” Largesse from the oil works was later used to create Pratt Institute, the prestigious art school, in Clinton Hill. Astral made Pratt a multimillionaire, but he later sold it to a bigger one, John Rockefeller’s Standard Oil. In 1911, Standard was found to be in violation of the Sherman Antitrust Act; the shards of Standard became Esso (Exxon), Chevron, Mobil and other companies.

The Astral takes up the entire block and has nearly 100 apartments. Its distinctive three-sided bays, arched entrances and recessed arch reaching the fifth floor are rare features; a center courtyard admits air and light to all apartments that don’t have a front exposure. Author Kate Christensen’s novel The Astral took its name from the building, and she consulted Forgotten New York for some information on the neighborhood. 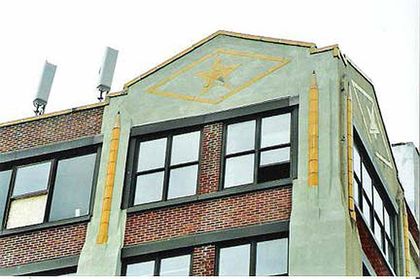 Several Faber pencil factories can be found on Kent between Franklin and West. The factories are recognizable by the star-in-diamond Faber symbol at the roofline. Eberhard Faber, the scion of a Bavarian pencil producing family, arrived in the USA from Germany in 1848, and after his first Manhattan factory burned down in 1861, he relocated to Greenpoint in 1872; the Faber company moved to Pennsylvania in 1956. The manufacturer, which pioneered the practice of placing erasers at the ends of their pencils, is recalled by a large sign facing the East River painted on its original building at 37 Greenpoint Ave. at West St., and by the huge yellow terra cotta pencils on its newer 1924 Art Deco building next door at Franklin. Faber pencil factories, numerous in the area on Kent and West Sts. near the river, are recognizable by a distinctive yellow star-in-diamond symbol. In its heyday Faber employed hundreds of Greenpoint residents.

Faber was infamous for “borrowing” ideas from other pencil manufacturers. When a competitor, Austrian-based L. and C. Hardtmuth added yellow coloring to simulate, so they said, an Asian origin for their pencils (Siberia being a chief source of graphite), Faber quickly followed suit and named one of their models “Mongols.” 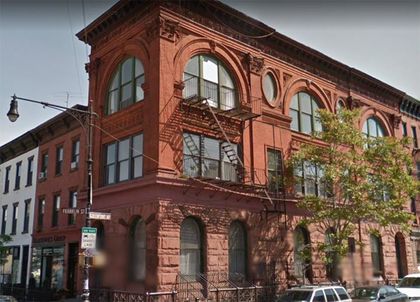 The Mechanics and Traders Bank at Franklin St. and Greenpoint Ave. features gorgeous terra cotta work and arched bay windows on the uppermost floor. After a series of mergers, Mechanics and Traders became JP Morgan Chase. The building later hosted a Polish-language newspaper and is now divided into expensive apartments. 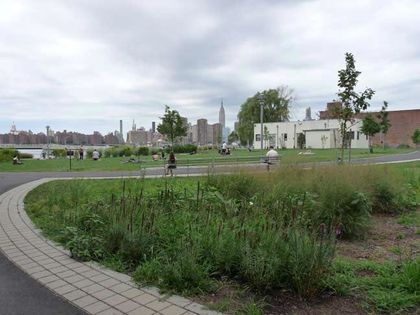 Transmitter Park was just an empty lot protected by a locked gate the last time I visited here in 2009. It’s since been developed into a neighborhood park, with ample views of the river. While it’s more developed and landscaped than the Grand Street Ferry Park further south, it retains a rough feel, with metal benches and bridges. A pedestrian bridge has been restored as a wetland accessible to visitors. At the end of Kent St. is a recreational pier, featuring opportunities for fishing and a view of the Manhattan skyline and East River. 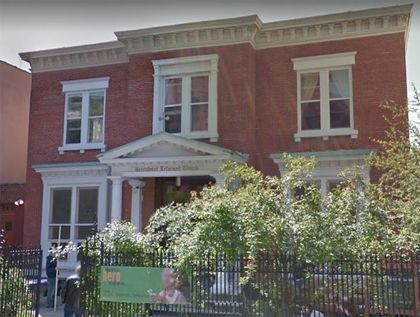 A relic of Greenpoint’s porcelain manufacturing past can be glimpsed at 136 Milton St., the present-day Greenpoint Dutch Reformed Church, formerly the mansion of Thomas Smith, founder of the Union Porcelain Works. Smith built the house in 1867, and the church moved from Kent St. in 1944, after the building had a stint as the local YMCA.

Smith took over a failed porcelain company after the conclusion of the Civil War and built one of the country’s premier porcelain manufacturers, constructing doorknobs, caster wheels, insulators and later, fine china items such as vases and platters. Union Porcelain items today fetch high prices at sales and auctions.

Smith’s mansion held secrets: he’d used ceramic pieces in constructing his house and decorating it, and in 2008, a surprising relic was found therein: a bas-relief portrait of Robert Fulton, his business partner Robert Livingston, and an unidentified vessel. Smith purchased the land the house is built on from Samuel Tilden, a Democratic New York governor who, in 1876, won the popular vote in the presidential election against Republican Rutherford Hayes but lost the Electoral College. 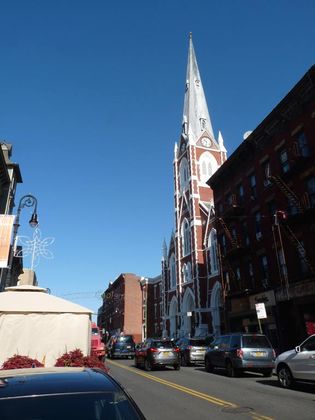 A symbol of Greenpoint (along with a newer symbol, the Greenpoint Waste Treatment Plant Digester Eggs) is the 1874 St. Anthony of Padua Roman Catholic Church at Manhattan Ave. and Milton St. It was the tallest building in the neighborhood at 240 feet in height until the new waterside residential towers were constructed in the 2010s. The parish was founded in 1856 with a mostly Irish congregation, and later merged with the mostly German parish of St. Alphonsus. Today it serves a mostly Polish and Latino population.