Driven Crazy at the MVA

That was when I knew the driving record book had driven me insane. 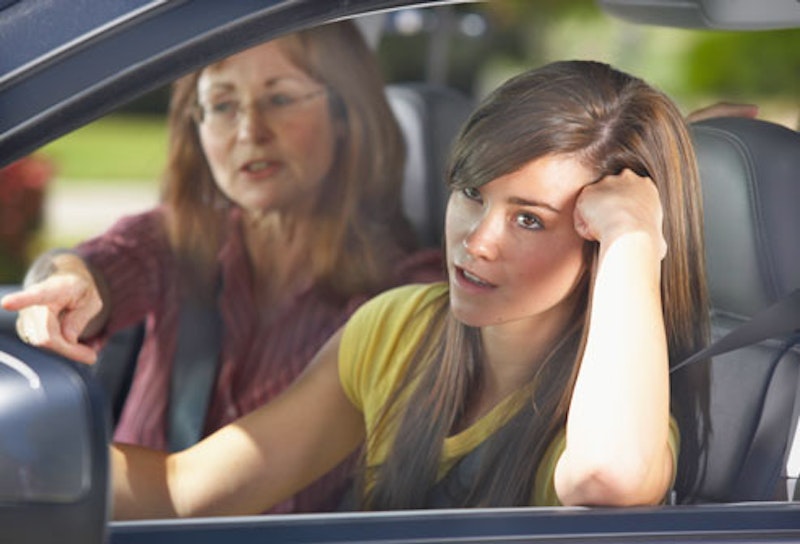 Though most parents dread their children learning to drive, I actually looked forward to my daughter Sarah’s impending driver’s license. It would be nice to have someone else to help with after-school activity pick-ups and quick store trips.

In Maryland, drivers’ license applicants must log 60 hours on the road, recorded in a handwritten journal and handed in at the time of the driving test. Kids may apply for a provisional driver’s license at age 15 years and nine months, and take the driving test one year later.

Over the permit year, Sarah counted down to her 16-years-nine-months birthday. So did I, since I had to write down every car trip she took. Each five-minute drive across town, including road weather conditions and time of day had to be recorded. As drivers’ test day approached, the book was faded, worn, and jam-packed with information.

Two days before the test, I went to the car (where we kept it) to check the math to ensure 365 days of small trips over 12 lined pages would add up to the required 60 hours. That was when I couldn’t find the driving log. I searched the car frantically then ran to the house to ask if anyone seen it. My husband casually remarked he brought it into the house a few days before to check the hours. His words echoed like bombs inside my head.

Our house? The gargantuan Victorian with six bedrooms, four children, three pets and endless clutter? I knew we’d never see it again. His ‘must be here somewhere’ observation was an empty promise, and I sat in stunned silence. A massive household search began- you check recycling, I’ll check the bill pile. It was gone.

Online I learned you could get a new driver’s log at the Motor Vehicle Administration, which I did—all fresh-looking, with green and yellow stripes I hadn’t remembered because the sun faded them on ours long before. This one was brand new and blank. We wasted a day looking, so I had 24 hours to create a 60-hour driving history. I bet people do this all the time, I thought. Not everyone painstakingly records all 60 hours of driving. They must fake it. All I could picture was the MVA administrator’s face as I handed her the book. She’d glance at it, flip it over, glare at me and say, “This doesn’t look very WORN.” Then, to people waiting in line: “NEXT!” My daughter wouldn’t get her license, which would be my fault.

Okay, technically it would be her father’s fault.

My attention to detail came in handy. It took six hours to recreate 12 lined pages of record entries. I used my calendar to look up correct dates and days of the week. I reconstructed small trips, night versus daytime driving, seasons of the year and potential driving hazards.

I may have faked a five-hour round trip to Ocean City because I was getting tired. I used different pens on entries so it wouldn’t appear to have been done at once. I gave the book to my husband so there’d be occasional handwriting variety. I splashed water on it so the cover would wear. I threw it across the room, stepped on it, and had a younger kid scribble on a page with crayon.

I drank out of a coffee cup, letting coffee drip down and create a ring on one of the pages.

That was when I knew the driving record book had driven me insane. Coffee rings. Seriously?

We arrived the next morning at the MVA, waiting the requisite 45 minutes you wait whether the 12 agents have lines or not. Finally, her number was called, deli-style.

I clenched the driving record book in my hand. Sarah calmly handed the woman her permit. Eventually, the woman glanced at the permit, at Sarah. Then: the moment of truth. She looked at me, squinted slightly and said, “Driving record book?”

I believe a tiny amount of urine may have escaped my bladder as I held out the falsified record.

She opened the book, flipping past my literary masterpiece in under three seconds. Her eyes settled on the last page where 60 HOURS appeared circled in bold red sharpie, and she told Sarah to have a seat until called for her driving test.

The government worker, whose face has seemingly never been wrinkled by a smile, simply looked with her dead eyes at me and said, “You can keep the book. We don’t need it.”