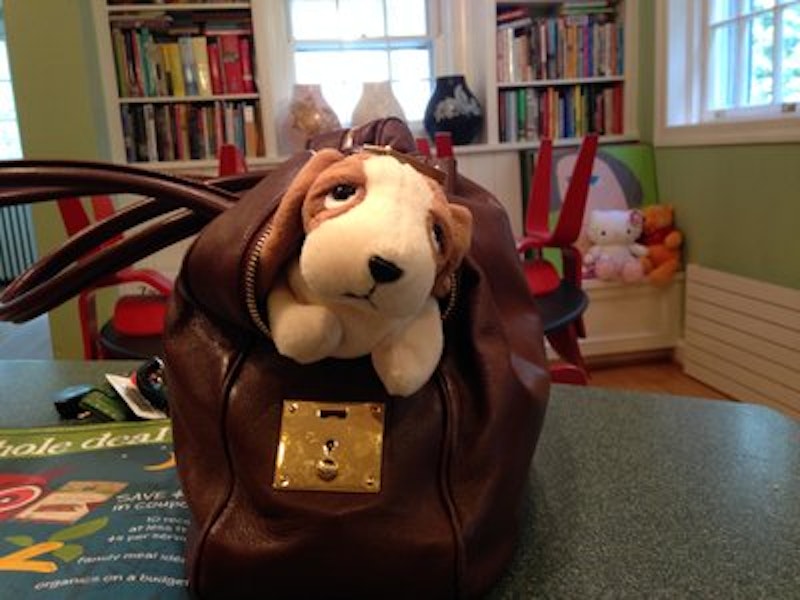 When I was 12 or 13, I came home from school one day and found our cat Harry lifeless, blood staining the sheets on a cot in the laundry room. My parents weren’t home, so I put Harry in a box, went to the woods abutting our quarter-acre of land, mumbled the 23rd Psalm, dug a hole and buried our alley cat. Harry’s demise wasn’t a shock: he’d been missing for a few days—not uncommon, he liked road trips—and wandered home a day earlier, much the worse for wear from another fight with a dog. At least that’s what we surmised: Harry was a ferocious battler, disliked in the neighborhood, and often, after he returned from a disappearance, I’d hold him in my arms, pick his scabs, and then, comforted, he'd go and find our dog Scuttle and get into more trouble.

I think of this because of the periodic rumbling from my wife Melissa that it’s time to get a dog—a tiny one that could accompany her in the car—and it’s an idea that I wish would float away in the clouds, like an errant balloon. Unlike my own childhood, our family has never had a pet, save a make-do hamster named Cornwallis that my son Booker received as a consolation prize about a decade ago. (We did go the birdhouse route, but the seed attracted rats and raccoons, so that didn’t last long.) It’s pretty incredible, actually: when we lived in Manhattan, the boys accepted the no-pet dictum, but upon moving to Baltimore, with a good-sized backyard, there was plenty of room for a dog. No cats, since Melissa and I are allergic to the critters, but the boys hardly ever raised the issue. Which has always suited me fine, since who needs chewed-up furniture, shoes and belts courtesy of a rambunctious puppy? Not to mention the house-breaking, a chore I had no interest in.

My mother-in-law has a menagerie of animals living at her Malibu house: horses, cats, parrots, and a slew of various-sized dogs. On occasion, one of the hounds is gutted by a coyote, but by the next week it’ll be replaced. When the boys were tots, we’d visit on holidays or during the summer, and our older son Nicky was extremely wary of the mini-zoo, especially the yappy lap dogs that snacked on his legs. “Dad, that animal’s nipping me!” he’d say, and insist I carry him upstairs to safety. Booker loved all the varmints, and they both thought the stable of horses was pretty neat. Coming from Lower Manhattan, it was like Mars.

Anyway, Nicky, as a youngster and early teen, kept his distance from dogs in our Baltimore neighborhood, and the rest of us had great sport with his fear, saying, “Nicky had a bad experience with dogs,” and that annoyed him to no end. As it happened, in the last year he grew attached to a dog in his downtown Baltimore apartment, and was saddened when Mabel had reached the last exit and was put to sleep.

As you can see from the picture above, my wife has made do with another sort of dog, and sometimes carries him in her pocketbook. He’s called Jelly Roll, and we imagine that the beagle causes a stir among the neighbors, furiously digging holes and tunnels and generally behaving quite badly, including biting intrusive neighbors. I don’t think I’ve seen a dog catcher since I was about eight—they really did exist, just like the guys who drove up our hill in trucks selling potato chips, pretzels and soda—but Booker warns me that if The Roll continues on this course of mayhem, authorities will be notified and he’ll be, as the euphemism goes, put down.

I think it’s a dandy situation: a pet you can fool around with, talk to, and not deal with messy annoyances. It’s my hope that the adorable Jelly Roll will keep Melissa’s periodic threats to acquire a nippy Corgi at bay.