Dear Diary: Why am I Such a Loser? 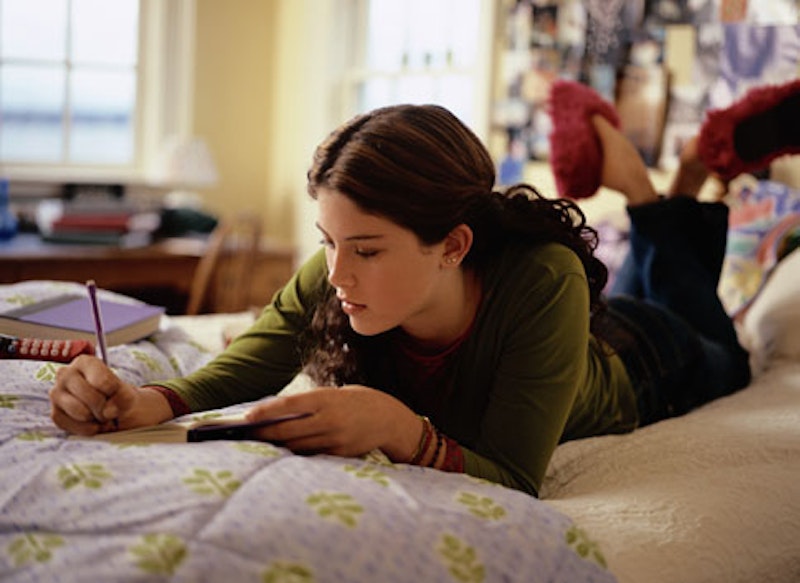 Recently I was accosted at a Barnes & Noble by a brightly colored product disguised as a diary. I wasn't fooled by this imposter, because I know a real diary is a sacred tome of blank pages, ready to be filled with private thoughts—a book entirely created as a depository for documenting one's own, uniquely individual life experiences.

At least that's what it used to be. Enter entrepreneur Phillipp Keel, creator of Keel's Simple Diary, a new cure for an old disease called creativity. His wildly successful monstrosity is on the verge of making old school diaries obsolete, by turning the standard empty pages into a compartmentalized, pre-packaged series of quotes with a silly array of multiple choice questions. You no longer have to feel, think, or do much of anything. Keel's new diary, keeps it simple, by doing it all for you.

Have a look at a compiled, sample page of Keel's Simplicity:

On the flipside, Keel, in his own right, is an idiosyncratic artist and best-selling author who has traveled the world. In an interview he attests to being creatively influenced by the likes of Federico Fellini, Diane Arbus and illustrator Maurice Sendak.

However, in drastic contrast to Keel's own eclectic life and the brilliant artists he admires, instead of creating a diary that promotes individual creativity, he has paid it forward by charging the purchasers of Simple Diary for their own lobotomy, via a multitude of mass produced generic questions that would bore the pants off of Fellini, Arbus and Sendak.

Perhaps in the world of commerce, the archaic blank-paged diary is a bust and its eulogy was inevitable. Maybe K$$L should be admired for cashing in on the new generation of rushed people who imagine they lack the time for self-expression without his well-heeled guidance.

Capitalism aside, imagine if Keel's commercialization of personality had been available during the horrific rampage of Hitler's Nazi regime. Anne Frank's Diary would no longer be the deeply personal, starkly factual words that cast an unflinching eye on the Holocaust. With the aid of Simple Diary, her memoir would die the same death of an emailed chain letter: marked as spam, sent to trash bin, by the Jewish and Gentiles alike.

Albeit Keel could have helped Anne Frank sum up her years of terror in under 60 seconds, if she applied a checkmark to a few of his probing questions.

Which one do you identify with most?
A fluffy rabbit ( ) A singing bird ( ) A persecuted Jew in World War ll (√ )

Beyond real memoirs, this travesty would also doom the fate of many revered fictional works that were also penned in diary format. Each could easily have been condensed using the Keel's Simple Diary format, thus eliminating the paper-wasting epistolary style novel:

Conceivably this may come off as a hyperbolic assessment of what several users of Keel's Simple Diary term as "an awesome invention," but do take into account how this form of mind control, not so many years ago, would be likened to Big Brother. Consider how this mass marketed creation of narrowed confines is possibly accelerating the decline of mental acuity and speeding up the devolution of human beings, turning us back into animals, of the bah-bah sheep variety…

Phew, glad all that yucky personal life stuff is out of the way, and saved for posterity in book form. I wonder what's happening on Facebook right now… But before we get back to social networking, I'll pose a very serious question.

Should Keel's Simple Diary be renamed "Keel Over and Diarrhea"?
Yes (  ) Baaaaah  (  )
(only choose one)