Please Stand Clear of The Tracks

Why pay for a metro card when the subway is so consistently frustrating? 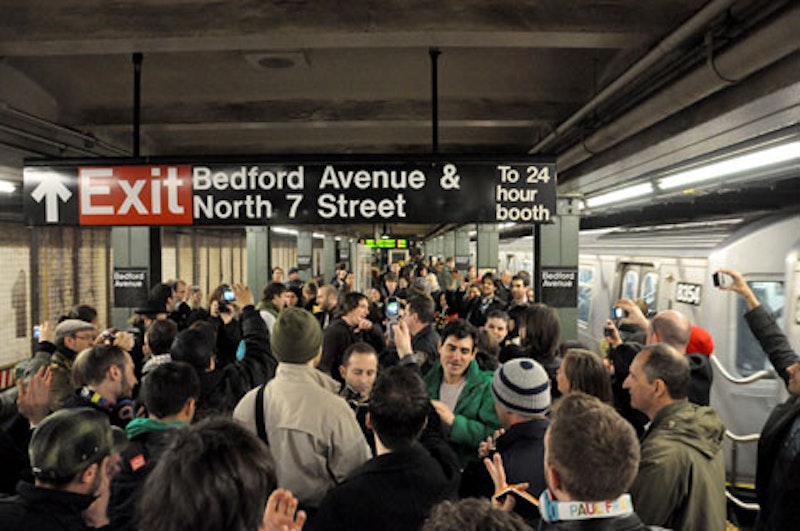 There’s not going to be an L line subway train between Williamsburg and Manhattan this weekend so whatever you need to get, go get it before midnight tonight! The pit of my stomach always drops when I see an NYC Transit Weekend Service Advisory that says, “L Trains between Manhattan and Brooklyn are suspended this weekend.” Like, I don’t know who over at the MTA decided it was a brilliant idea to cut Brooklyn off from Manhattan on the weekend of the biggest shopping period of the holiday season, but whoever green-lit this does not understand the wrath of coupon-armed, deal-seeking, venomous shoppers.

Sometimes I get really scared when I think about having to leave New York, scared for no other reason than having to be someplace with fewer, less reliable public transportation options. I have never driven a car, don’t have a driver’s license, don’t plan on obtaining either of those, and I’m happily pedestrian. Plus, I’m a master text-walker: I can fly down the sidewalk and text and dodge people at the same time, and if I can do it, so can you, tourists. But even the idea of driving turns me off. So many things to be responsible for: the car—filling it up, getting it fixed, making sure you don’t hit other people or whatever. I just can’t be bothered with all that.

I’ve been spoiled by a “24-hour” public transportation network. Sounds great on paper, right? But the reality is that the NYC subway system can seriously suck in those moments when you’re late to a booty call and you can’t reach the other party because there’s no cell service underground, or maybe you’re going to a concert or a job interview or you have a plane to catch. If only the train came 10 minutes ago and didn’t stall in the tunnel for five minutes, you would have only been two minutes late instead of 30.

The Village Voice reports that 141% more people have been taking the L train between Manhattan and Brooklyn since 1998. That’s a lot of people. And if that’s the case, I don’t understand how at nine a.m. on a Monday morning it’s harder to get inside the L train at Lorimer than it is to get a certain well-known television personality to come out of the closet. And God be with you if you’re planning on getting in at the Bedford stop, the center of the Williamsburg vortex.

The only way to catch a train from Williamsburg to Manhattan at nine a.m. on a weekday is to first wait on four trains to pass. Then when the fourth train comes and you see that it’s packed, too, you have to jam yourself into it so you’re basically within hand job reach of the person next to you. You don’t even need to hold the rail because it’s that packed. No matter how full the train is it seems like there’s always room for that one extra person who always forces himself in. Fumes of morning breath, shampoo, coffee, and armpit coat the air; you pray the five people boxing you in you don’t have Swine Flu/Pink Eye/Bed Bugs.

The most annoying part about the trains is actually waiting for the next train. Sometimes you don’t know when it’s coming, so you stand on the edge of the platform and stare down into the tunnel, huffing, puffing, arms folded, like all that’s going to make the train come any faster. But now, more stations have started including those very nice time clocks that tell you when the next one arrives so you’re not completely in the dark. But then again, there’s that thing the trains do sometimes when you’ve been waiting 15 minutes and just as the train pulls in an announcement pops on that says, “Ladies and Gentlemen: the next L train arriving on the Manhattan-bound track will not stop.”

Somebody remind me: why do we pay the MTA $104 a month for unlimited metro cards if people can’t fit in the train cars and if service is frequently questionable?