It's counterintuitive, but the older you get the Christmas season seems longer and longer each year. 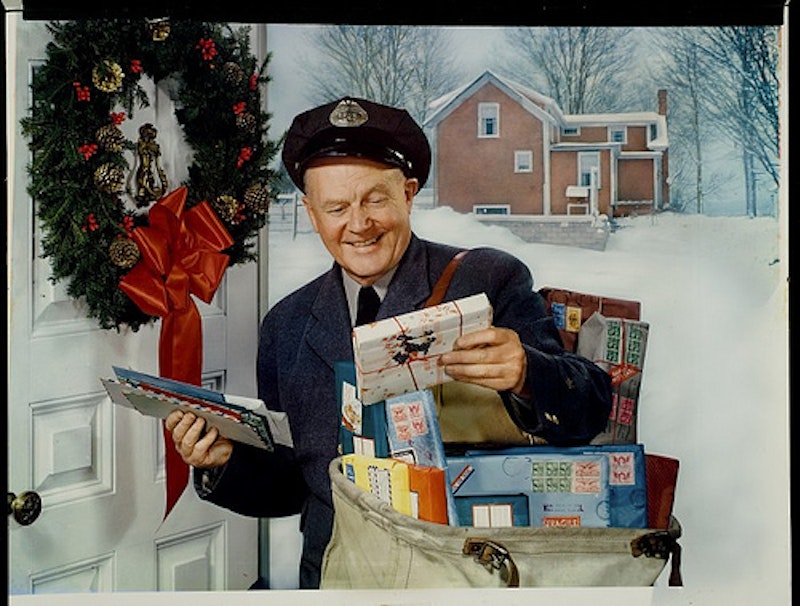 It didn't take long on Thanksgiving Day before our family, sitting down at a packed restaurant adjacent to Baltimore's Little Italy (a once idiosyncratic neighborhood where Nancy Pelosi grew up knee-deep in political ward-heelers, but is now sufficiently Chamber-of-Commerce sterilized for tourists), collapsed in a fit of goofy giggling, realizing just how sublimely absurd, and fitting, our choice for the November feast was. Mind you, this is no malevolent knock on Della Notte, the anonymous eating factory where, after waiting too long to make reservations at a less kitschy spot, we wound up on that drizzly, foggy late afternoon. It's just that the scene was so hilarious, truly side-splitting, that we couldn't help (as the proprietors would endorse, without a trace of irony) but adhere to the "When in Rome" maxim.

Della Notte, with its faux stone walls, busts of emperors (the likes of which can probably be had on eBay for less than 15 bucks), "antique" columns and the cheesiest—and far too loud—lounge pianist this side of the Poconos, is an establishment that has, besides its clientele, almost nothing to do with Baltimore. In fact, the place is so pre-packaged that if we were in a geographical bubble, it'd be a swell guessing game about the location: might've been Las Vegas (obvious first pick), but also St. Louis, Manhattan, Dallas, Milwaukee or San Jose. The homogeneity of the United States is, by now, an old lament, but sometimes it still smacks you in the jaw. Della Notte is (and this takes a stretch of the imagination) an upscale version of an Olive Garden, although outrageously overpriced for the humdrum "award-winning" Italian cuisine.

I'm foursquare behind entrepreneurs gauging their market, and getting what they can, when they can, and the fault is exclusively mine for choosing as an entrée a $37 tough strip steak rubbed with a glaze so sweet it felt like I'd eaten two Hersey bars after four bites of the dead piece of cow. My 15-year-old son, who was somewhat distressed that he was the only one clinging to tradition by ordering turkey, looked at my plate and declared that Della Notte might be an apt purgatory for all those PETA members whose mischief goes beyond mere (if insufferable) proselytizing.

Yet, carping about the grub aside, we had little to complain about. After all, the four of us were together, sharing family jokes, touching on political topics (the boys are split on President Obama), upcoming college applications, swine flu, Red Sox GM Theo Epstein's daunting task to field a competitive team next season and the upcoming spate of Oscar-driven movie releases.

Paraphrasing Bill Clinton, at 54, I've celebrated more Turkey Day holidays in the past than I will in the future, and this 2009 occasion, a Lost in the Funhouse diversion, is now in the memory bank. The great benefit of dining out on Thanksgiving is that there's no frantic shopping, preparation of far too much food, and the bliss of ignoring all those stupid (and largely untrue) verbal and written encomiums of "The best part is the leftovers!" What a crock.

As a kid, my mom did her best to lay out a spread—although I never touched the frozen sweet potatoes with marshmallows on top or the canned cranberry dressing—but aside from a couple of really good turkey sandwiches the next day, and maybe a slice of slowly deteriorating pumpkin pie, the leftovers were stored in the refrigerator, untouched until she chucked them about three weeks later. Also against stereotype, we had no family feuds when I was a youngster: My dad was home all day from his car wash, did the honors of carving the bird, and as the youngest of five I thoroughly enjoyed the company of my older brothers, at least two of them home from college for a few days. Before the mid-day meal, the five of us would repair to Mill Dam Park in Huntington, for our annual Turkey Day Classic touch football game. The middle brother, Doug, floated between the two teams, and our dad was the ref. Mom didn't give a hoot about who won, just that no one got injured.

Back in 1976, when I took a semester off from college to work in Denver, I hitched a ride down to Santa Fe, where one of my brothers and his wife were living atop a mountain in what could be charitably called a shack. At the time they didn't have much in the way of cash, but that didn't get in the way of a bounteous T-Day feast, although the amount of wine and tequila we consumed does somewhat dim my exact recollection of the event, a hazy 48 hours that only becomes clear when I fish out the photos that were taken.

Aside from the joviality of spending time with family, the highlight of that trip was the day after Thanksgiving—I don't think the term "Black Friday" had been coined at that point—when my brother took me to a smart shop in the city to buy a brown cowboy hat. And this was no knock-off lid: I'd saved some dough from my meager paycheck in anticipation of the purchase, and upon returning to Denver my colleagues at College Press Service were mightily impressed. Dressed in faded blue jeans, cowboy boots I'd bought in Houston a few years earlier, a Good Will vest that held my pack of unfiltered Kools just right and the new hat, I was one cool, 21-year-old dude.

When I returned to Baltimore in early '77, outfitted in Western garb, classmates and pedestrians on the filthy streets begged to differ, making jokes (and worse) at my expense. Didn't bother me a bit and, in fact, helped score points with a terrific history professor, who'd jammed in San Francisco with members of the Grateful Dead a decade earlier before deciding his future was more secure in becoming one of the leading scholars on the life of Teddy Roosevelt.

And so begins the interminable holiday slog that never ends on Jan. 2, when Christmas trees are so dry that just a touch of the needles might require a band-aid, but drags on until the middle of the month. I'm in no way a Scrooge, or Grinch, and Christmas Eve is my favorite day of the year—a weird but delightful suspension of time when everything seems perfect—but the aftermath is such a dull, and generally unproductive time, that I often long for a fast-forward of time. Of course, here in Baltimore, there's a very strange custom (unconscious, I believe) of residents leaving their front-door wreaths and Christmas lawn ornaments of display sometimes until March. Not my style, but when dirty snow and bare trees define the landscape around Lincoln's birthday, I get a boot out of seeing an inflatable Santa bobbing back and forth with the wind outside a dentist's or florist's premises.