Brian Michael Bendis and Alex Maleev's Scarlet is the story of a righteous victim with a lot of rage. 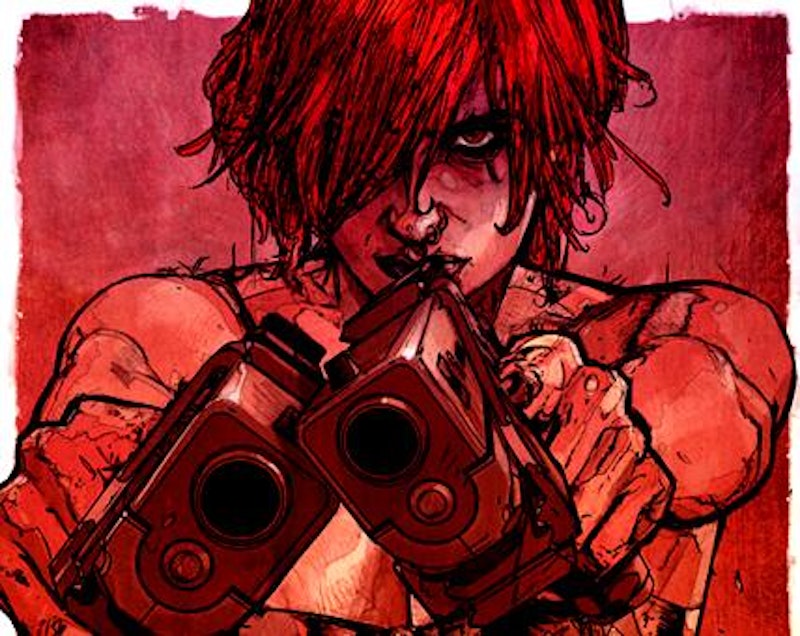 American laws rightly criminalize evil intent only if it is married to evil deeds. However, if a copy of Brian Michael Bendis and Alex Maleev's Scarlet was ever found in any of the semi-public libraries of Occupy Wall Street or its imitators and the police freaked out about it, it would be hard to blame them. Scarlet is not a vile comic, but it’s a dangerous one in the wrong hands. Its heroine, a young redhead named Scarlet Rue, is just about the most sympathetic violent revolutionary you will ever meet. Which is saying a lot considering how she punctuates her political points by killing cops. She does it up close and personal and through the telescopic lens of a sniper rifle hooked up to a camera—to record it for convenient YouTube viewing later.

Actually, the violence is really Scarlet's political point, insofar as she has one. Her accidental revolution is not about Marxism, fascism or lesbianism. It's about simple justice, secured through vigilante means. We break into the story to see her choking a plain-clothes cop to death and picking through his wallet. "Six hundred dollars," she mutters. "Well, I made rent."

You, the reader—if you are not a complete psychopath—are ready to pounce at that one. But then she stops you. "Hey, whoa! Don't be quick to judge, OK?" Scarlet warns us, breaking the fourth wall. "Yeah, I killed a cop. But don't write me off just yet. There's—there's layers here. You have to start thinking like I've had to." This particular cop was both dirty and a dirty old man. He had told her he would "bust me unless 'I did him a favor.' He actually said that. Those exact words. So I did him a favor. I did the whole fucking world a favor. You're welcome."

Her commitment to rough justice goes beyond cops, though they catch the worst of it. When Scarlet happens upon a would-be bicycle thief in downtown Portland, Oregon, she bloodies him with his own chain cutters, yelling, "Don't take things that don't belong to you!" Our heroine is smart, not too bad on the eyes, and hopes that she isn't going crazy. That might have something to do the bullet she took to the head. A little over a year ago, a corrupt cop started hassling Scarlet, her boyfriend Gabriel and several fellow friends/slackers on the steps of Pioneer Courthouse Square. Things went sideways in a hurry. The cop got a little frisky and grabbed a tit while patting her down for phantom drugs. Gabriel wouldn't stand for it. There was a fight, a chase, an escape and a deadly ambush. Because of the fortuitous angle of the gunshot, Scarlet only landed in the hospital for an extended stay. The local cops swept Gabriel's death under the carpet, in part because the guilty cop is related to the police chief.

Police corruption is the current Great Cliché. It's an exaggeration certainly, but the storyteller's complaint is not groundless. Most U.S. cops are not monsters, yet there is an asymmetry when they come into contact with civilians in terms of both force and legal protections. Civilians and cops are not necessarily even equals under the law, given the enhanced penalties that can come with assaulting a uniformed police officer. Considering what they could get away with, it should surprise us that police aren't more corrupt.

The way things go bad for Scarlet and right for the cop who shot her is a tale convincingly told. He picks on what he expects to be an easy mark but this time the mark fights back. He’s bloodied and angry but still not a complete idiot. If he had shot them out in the open, with all those witnesses milling about Pioneer Square, it would have been fantastical. But that he caps them both when he catches them panting after a chase in the back aisles of Powell's Bookstore, and that he frames Gabriel posthumously as a drug dealer to cover his ass, just works.

The first collection by Icon Comics, gathering together issues one through five of the series, is morally lopsided. It’s the story of the righteous victim, of how her pain and rage drove her to contemplate and act on things that most of us would dismiss. "If this world has to burn to the ground before all the fuckers learn to stop being fuckers," she begins, then hesitates, and then concludes, "then that's what it's going to do." But we don't really get to the burn yet. We see her start her campaign of anti-blue terror. We see a movement of activists starting to form around her as their violent patron saint. And then it's to be continued...

I trust that Bendis in future installments will show some of the pitfalls that come along with Scarlet's .30-06 approach to creative problem solving. He's a veteran comics writer with something to say, and he is ably assisted in this by the tight, inky visuals provided by Maleev (they collaborated previously on several other projects). Bendis understands that just about anything we do can be morally hazardous, whether it’s walking a beat or fighting the man. One visual in Scarlet I found absolutely haunting: Pioneer Square itself. The square is a one-block explosion of brick—brick floors surrounded by brick steps and brick walls—in Portland's downtown. I’ve tried to visit in on my last several visits to the City of Weird. I've gone there for several reasons, one of them political. This is a place that actual violent revolutionaries want to blow up.

On November 26 of last year at the "holiday tree" lighting ceremony there, a 19-year-old Somali immigrant named Mohamed Mohamud waited for the right moment. He had parked a van nearby packed with explosives and he had the remote trigger. Mohamud screwed up his courage to the bombing point, shouted "Allah Akbar!" and tried to trip it. He triggered the FBI instead. They had caught him in a sting and supplied him with a dummy bomb, thank God. I am not charging that Bendis started his Scarlet revolution in Pioneer Square with any knowledge of Jihadi intentions. The comic debuted months before the terror plot was so publicly foiled. And if there's going to be a law enforcement "good guy" in future issues of Scarlet, it will likely be the FBI. Still, I wonder if Bendis would start the story at the same place again, knowing what he knows now.