I want to believe in the system, its language and agency, even as I distrust it. 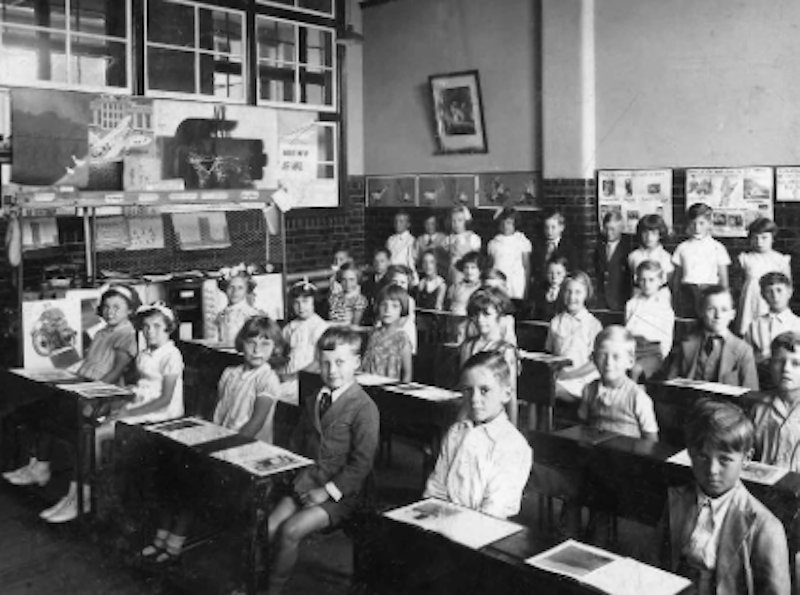 Crispin Sartwell, a fellow writer for Splice Today, argued in 2016 that compulsory education in the United States is not only dysfunctional but also morally reprehensible. In “Compulsory Education is Evil,” he asks, “What are we wrong about that we don’t know we’re wrong about?” and speculates that one possible answer is our nationally mandated and determined education system, which he says is “faddish and empty and inculcates an automatism reflecting its own.”

As usual, Sartwell makes an interesting argument, but this one strikes me as more polemical than persuasive, especially since I’ve been involved with higher education for much of my professional life. Having taught high school through graduate school in the United States, I’ve had a front-line view and, after almost three decades, I feel confident enough to be blunt: in many obvious ways, American compulsory education sucks. Unfortunately, ignorance sucks more. And the free market doesn’t care.

I’m sure Sartwell disagrees, but I suspect that’s rooted as much in his politics as in his first-hand experiences or impressions of our current system. His piece makes an essentially libertarian argument that educational authority shouldn’t rest in the hands of the government, implying the usual objection that education is most effectively provided by a free market. He writes, “Indeed, to put governments in charge of the education of children is to make those children’s lives subject to political moods and movements, and public school curricula are subject to political fads one way or another all over the country. Always picture that machine in the hands of the sort of people you disagree with, because that can happen.”

It definitely can. And to be fair, at the beginning, Sartwell concedes that he’s only speculating. But that provides thin cover for his characterization of U.S. education as an anachronism on par with eugenics and mass incarceration, designed to “control populations and redirect them to become and to reproduce reliable workers in a capitalist economy, or to turn them out as a standard product for employers.”

In the same paragraph, he goes suggests compulsory education is a mode of racist “cultural destruction and indoctrination.” With that in mind, I imagine he generally agrees with Rutgers’ recent decision to embrace the current doctrines of anti-racism by “limiting emphasis on grammar/sentence-level issues so as to not put students from multilingual, non-standard ‘academic’ English backgrounds at a disadvantage.” As a former English teacher, I might argue that this is an expression of a different but no less pernicious “automatism” currently afflicting American culture. But no matter. Speculation about cultural destruction and indoctrination can run fast and loose in the polemical mode.

Nearly all of Sartwell’s accusations contain some validity, backed up mostly by postmodern rhet-comp scholarship from the 1970s and 80s. Writing theorists like Mina Shaughnessy in Errors and Expectations (1977) and Mike Rose in Lives on the Boundary (1989) have done much toward waking academia up to the reality of competing literacies, arguing that forcing students to learn and use academic discourse is tantamount to enforced cultural assimilation. In other words, it’s a kind of structural violence perpetrated on the young as a gatekeeping process.

A year after the publication of Rose’s Lives on the Boundary, Patricia Bizzell articulated this idea in her influential College English essay, “Beyond Anti-Foundationalism to Rhetorical Authority,” writing, “Failing to share in academic discourse is often not a personal or idiosyncratic failing but rather seems to be a function of belonging to a social group that has experienced other exclusions and disenfranchisements—that is, other injustices.”

This is a sentiment that Lester Faigley, in Fragments of Rationality: Posdmodernity and the Subject of Composition, traces back to postmodern theorists like Foucault and Lyotard, who, misunderstood and misapplied by the current racial-essentialist left, are enjoying a comeback—particularly in the context of Robin DiAngelo’s specious White Fragility and its cottage industry of trainings and corporate struggle sessions. Thirty years of shoddy education-department interpretations of Focault, Lyotard, and Derrida may have caused them to roll constantly in their graves. Whether that’s finally enough to approximate an Evil Dead sequel remains an open question. But Sartwell doesn’t do the necromancy.

Even though English and composition studies departments have tried to “decolonize the writing center” since at least the late-1970s, that abundance of scholarship and advocacy has no place in the present polemic about the worthlessness of compulsory education. Instead, the libertarian distrust of bureaucratic authority gets far more traction.

Gene Healy’s “In Defense of Distrust in Government,” sets forth a central theme of American libertarianism: emphasis on the fallibility of political systems and wariness toward the motives of politicians. He argues, “Today’s politicians and pundits may lament rising political distrust, but when the voters refuse to take claims of federal benevolence on faith, they’re honoring their forefathers and fulfilling their duty as citizens.”

While this may seem cynical, Healy claims that such distrust is to be celebrated: “[D]eclining trust decreases support for foreign‐​policy adventurism, and other scholars have shown that it also makes the public less likely to endorse restrictions on civil liberties.” And it’s precisely the maintenance of civil liberties, often cast as “individual rights,” that characterizes the first principle of the Libertarian Party, as stated on their website: “We, the members of the Libertarian Party, challenge the cult of the omnipotent state and defend the rights of the individual.”

That sounds pretty good as a foundational value. No American wants Big Brother up in his medicine cabinet, taking away his firearms, indoctrinating his kids, or forcing him to wear personal protective equipment during a global pandemic. And if ethical public policy were actually that simple, the Gordian knot of American political bureaucracy could be slashed overnight—something akin to what Trump promised to do with the swamp in 2015.

If the free market could actually be relied on, compulsory education might come to seem less like a lost chapter from Dickens’ Hard Times and more like Paul Verhoeven’s satire, Starship Troopers, where history teacher, Jean Rasczak, apologizes for fascism in a most libertarian way.

Starship Troopers is also very interested in the education of the youth through compulsory indoctrination. It’s Rasczak’s best moment in the film and it takes place in his classroom discussion when he announces, “Something given has no basis in value. When you vote, you are exercising political authority, you're using force. And force, my friends, is violence. The supreme authority from which all other authorities are derived.”

In other words, force is a matter of individual choice and therefore grants authority, a certain self-generated jurisdiction over personal liberty. Or as the Libertarian Party website puts it: “The only legitimate use of force is in defence of individual rights—life, liberty, and justly acquired property—against aggression. This right inheres in the individual, who may agree to be aided by any other individual or group.” Granted, the libertarian formulation is a little gentler than Verhoeven’s over-the-top version. But we haven’t met the unwashed face-eating insectoid hordes from Planet Klendathu yet. Give us time.

Obviously, I can’t accept any of this, which is where my own politics possibly shutter my thinking towards “what I don’t know I’m wrong about.” As an American born in the last year of the Nixon Administration, I’m predisposed to simultaneously love and hate the dysfunctional imperial style. I want to believe in the system, its language and agency, even as I distrust it.

I love the empire because, through bursts of organized violence abroad, it ushered in an era of relative affluence and stability, letting education and the humanities continue relatively unmolested in America for about 50 years, thereby providing members of my family with teaching jobs and dental insurance. I grew up with good teeth and a love of western culture; a combination which I know implies a level of privilege. Still, I remain as grateful for the integrity of my molars as I am for my beautiful language and its literature.

But I also distrust the empire for yanking away many of my privileges in 2008, when the Great Recession finally legitimized university hiring freezes, rampant adjunct exploitation, STEM-fetishization, and an overall squeamish hypocrisy in academic culture—right when I, as a new PhD in English, began my job search. So for me, it’s personal. The free market decided—and not in my favor. But I still believe in the value of state education. Perhaps I’ve been thoroughly indoctrinated.

Henry Kissinger started as Secretary of State the day before I was born. Twenty-eight years later, I sat on the floor of my tiny studio apartment, correcting student essays, and watched the World Trade Center’s north tower burn on CNN—not fully comprehending what was going on but nevertheless covered in a creeping dread, the sense many of us had at the time that the bill for the United States’ imperialism had finally come due.

That may have been the key moment for me to raise my fist, run into the street, and scream that the passing campus security officer was a pig and a tool of the oppressor. But I had 35 students, all one year out of high school, depending on me to help them figure out how to express themselves comprehensibly, if not gracefully, on paper. Our system of compulsory education had brought them to me and now I had a certain duty to them and my chosen profession. After watching the coverage as long as I could, I switched off the TV and went back to my stack of essays, apparently just another witless cog in the evil machine. I hope I was a good well-oiled cog, at least.

Sartwell notes, whether cynically or sarcastically, “There’s not much point in producing more five-paragraph essays.” In answer to that, I wonder if he really thinks five-paragraph essays are the point or if he’s just being disingenuously reductive. Has that been what it’s all about? All the research, writing, office hours, considering and conferencing and trying to teach people to read and write with care? Then again, developing enough skill to craft a rhetorically persuasive essay is no mean feat, whether or not it serves the corrupt motives of our decaying imperial bureaucracy.

I suspect Sartwell and I both hope the kids will eventually see “what we’re wrong about that we don’t know we’re wrong about.” We just place our trust and distrust in different places. As someone who admires Sartwell’s writing, I hope this is true.

Instead of obsessing about the moral implications of structural violence, I always preferred to teach the kids, even if I risked indoctrinating them with my anti-libertarian conformist values. If they showed up in my classroom, I wanted to show up too, no matter how our tragic dysfunctional system may have gotten them through the door. But maybe I was being too idealistic, too unwilling to let the market decide.