Exploding Heads For Fun and Profit 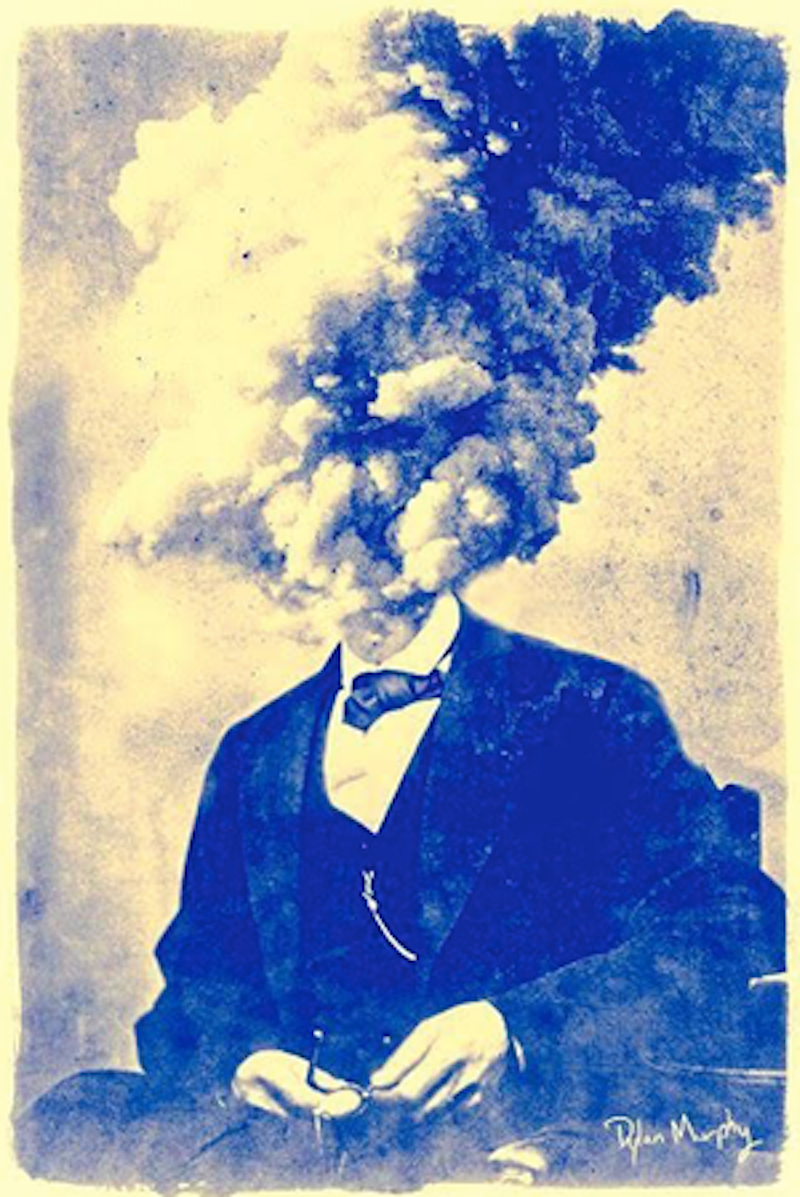 There's a short story by Carl Watson about President Kennedy’s head exploding in chunks, blowing brain bits out into some Big Bang ectoplasmic cosmos. Hot bullets piercing space like a comet burning through the atmosphere. The birth of a universe splattering reddish gray matter onto Jackie's blazer floating into a bloody mist through invisible air. Rockets copulate the dark holes of the final frontier. The universal exploding head. Sounds legit as anything nowadays.

Life usually takes the long way home. It mostly gets in the way of living. There are no shortcuts inside your noggin or outside the void in outer space. Searching for life on Mars after not discovering any here on earth we allegedly put a man on the moon a few times. Left a flag there just to say a “Fuck you,” we were here first, and had a piss behind a big moon rock and a walkabout. Left without a foot to carry the weight of a leg to stand on. On two wobbly left feet. Tripping over our spaced out shoe strings. These days my head usually feels similar to Carl’s short story theory of the how and why heads explode giving birth to a fresh universe.

Mere works of fiction or thoughtful brain flex exercises? Possibly just another wacky conspiracy where everything in these waking hours is a lie, hoax or, worse, it never even happened. Nothing is real in hindsight. For no damn reason we allow this flotsam to flow into our sponge-brained processes. Like canned commodity potted meats in a Hasil Adkins song. You won't be eating no more hot dogs when I hang your exploded head on the trophy wall. The meat packers of this world have many secrets.So many mysteries unknown. So little time for puny humans.After a text inquiry to Watson, he informed me the title of that short story is, “The Big Bang was the Suicide of God” from his book Bricolage ex Machina.I imagine that fatal shot to President Kennedy’s head could’ve been Abe Lincoln’s head too. That’s a whole other can of worms.

Carl then told me of a life event that happened long ago. “Back in Chicago I used to make sculptures. I made a mask called Big Idea. It was an exploding head, a blank face with all the stuff, eyes, ears, lips, hair, nose, teeth, etc. all flying off of it on wires. It was the only piece of art I ever sold. I think I got $30. At least art pays something.”

It's not so shocking but you'd be surprised to find a pulse in the boneyard of your mind. A dead quiet place where silence is screaming its lungs out in a multitude of foreign sign language. In a cosmic vacuum cleaning sucking up reality’s dust. Talking in tongues with hand signals decoded secret messages to brain waves synapse sparking drips all over the floor of your imaginary ideas. To think you know what to believe is real as that old mug staring back at you in your image reverse reflection of no return. Made in your imagination or a crude facsimile. Like some tent park hobo jungle camped inside your head. A place where good intentions go to suffer. A winter of the soul begs summer’s spirit to linger a little bit longer.

All that swill of useless info backs up a funky stank festering inside a cranium-boned prison. Eventually it’ll burst into the artificial light of night terrors and dirty daydreams from the bilge pump of bad ideas. That garbage dump where memories go to hide or get recycled into new simulated experiences. Found memories In a selective process of forgetting. Sleep is the only escape where freedom lives. Manufactured events that never happened somehow appear more real than not. Is it any wonder why liars must continue the fib to fit their false narrative ever forward? A cage inside of a cage stuck in meaty flesh and blood prison. So much beyond critical mass that something’s got to give.

Every little thing makes my weak heart leap out of my chest. I feel under attack from mysterious forces. Strange powers overtake common sense. The fear’s real. It eats away at defenses already compromised by infirmity and a fragile immune system.

The last few years have grown more hideous. Confusion clouds bright sunny days. It isn’t just one of those days. It’s a constant never-ending deluge of raw sewage clogging up every orifice. That’s when heads detonate. Insanity runs from normal to super realism. Boredom sets in with a low-grade fever and ringing in the ears. Its pandemic consequences leave nothing to the curious mind. Just when you think it can’t get worse, it does. Heads will roll and burst into flame.

Dead or alive, it’s a coin flip. Two out of three tosses. It’s the collective insanity of future’s failure to regain the past. Spent lives dress up like ghosts in present-day garb. Strut around like peacocks wiping their claws all over my delicate psyche. Maybe I’m letting it get to me. Losing it over all this nothing. My homemade insanity creeps up at the slightest provocation. A fly lands on my arm and I go nuts. Any little misstep drives me over the edge. Am I crazed in crazy craziness?