Get back to me in the morning. 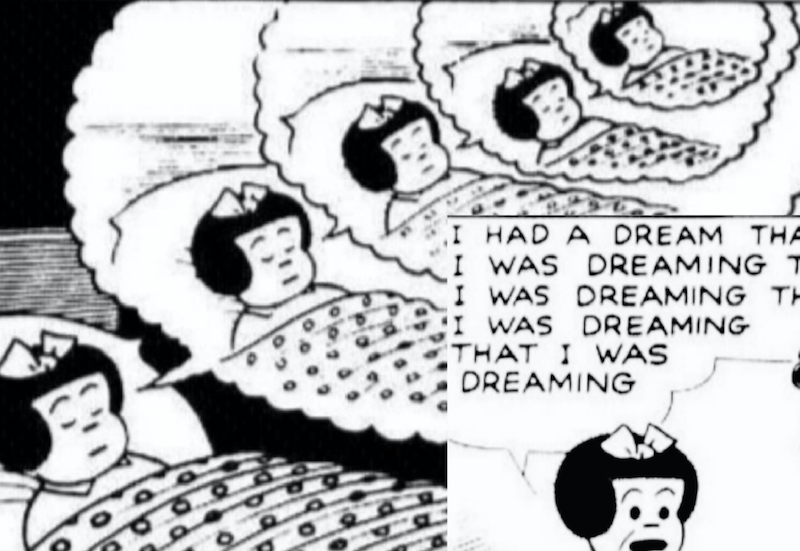 I often approach the concept of living as a dream. It's a natural to believe dreams are concocted by a stretch of an overactive imagination. We spend roughly one-third of our lives sleeping, give or take. So there's plenty of room for pie-in-the-sky pipedreams. Suppose you add insomnia plus figure in other sleep-related disorders of the drowsy equation. With all that dreaming going on, you'd think we might remember them better. But as soon as you wake up, the dreams vanish.

Make up for it with daydreams. Like drinking in the afternoon, but less stupefying. Altered states of awareness are a welcome alternative to the real-life humdrum routines of stark reality. To cast away hours burning daylight, with dreamy thoughts, at a haphazard drunkard's gait, stumbling spaced-out in a delirium with the constant itch of freaking out. Not quite drooling in an unconscious state yet still vaguely aware. Come on, coma baby, you're so sedate. Get out of that trance. It's the stuff of dreams that keeps us from going insane.

When you're wide awake, there's still a hypnotic disconnect lurking below the surface, and the mind drifts. Not like a zombie, though sleepwalking through the days trying to recall last night's dreams while creating new ones along the way is futile. Similar to a drunken blackout. What the hell did I do last night? It's a balance of self-aware distraction navigating from conscious thoughts and actions to imaginary people and places.

A babbler is traveling around in space-time, using the lingo of a shaman, talking in tongues. That’s me. The inner dialogue runs the spectrum of nonsensical depictions, surreal fantasies, and illusions. Why should it make sense? The voices in my head are versions of dreams. They speak in ways I don't understand. They change with every word, playing out independent thoughts. I fill in the blanks with more disconnected imagery, paint the void with ideas and scenes in a dialogue of jumbled unwritten scripts, like planting seeds of belief in a garden of calm repose.

This sleepwalk sidestep leads to more questions in the process that only slumber can stop. To sleep, to dream is what breathing is to life. No one knows if we have longing desires after death. The afterlife isn't telling. But the act of catching some winks is like a bit of death every time you nap. Some call death a dirt nap. The paradox is funny considering the possibility of unconscious energy and the opposite of being awake and aware, like sleep itself, the suspended animation of this world, of another one into the great beyond.

Here’s the dream. The cloud bank lays low just above the horizon. Its thick, dense gray bulk looks ominous, looming heavy overhead. Above the cloud deck, a vast blackness swallows the void. White dots of light, some bright, others dim, almost disappearing, flash, then reappear. They sparkle across the night sky. A restless stargazer with faraway alien eyes blinks. Views of the starry sky twinkle as they move through dark air. Some travel faster than others, a plane's red light blinking off and on. Satellites in orbit reflect the glinting shine from a far-off glare of distant city lights glowing in your cortex.

It's a dance in a kooky multiverse of parallels. Some call it heavenly paradise. The starry galaxies connect the dots, all part of the bigger picture. And like a dream, all those dearly-departed loved ones are up there too, waiting to embrace you in their ghostly loving arms. A quaint belief or twisted phantasm, but who knows? Follow your dreams. We should have nothing to fear. Our dreams, forgotten wishes that might be true, or simply nightmares reimagined. Either way, why don't you sleep on it and get back to me in the morning?