"Three more minutes and the fire would have slid across the roof and taken the hot wheels and the wedding invitations and maybe even the dog with the same name as me." 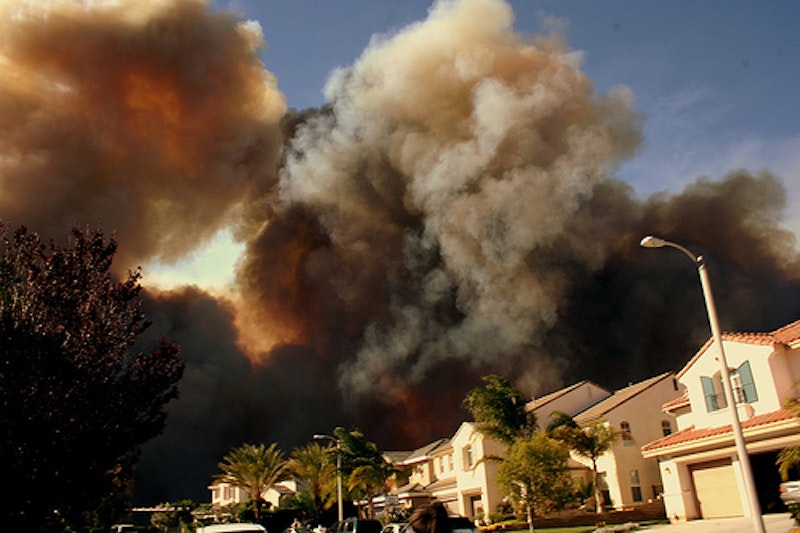 I wish I had never started smoking not just because I will probably die intubated and ugly in a hospital bed, but because a single cigarette cost me $720. While owing $720 to a landlord you don't really like is an unfortunate stress on a bank account that doesn't exist, this particular situation exists because I am both lucky and unlucky. It was unlucky that a cigarette left burning caught my balcony on fire, but lucky that the fire wasn't deadly, that I still have a home and a mailbox in which to receive a $720 bill. This is how my fortune runs: I am as lucky as the four-leaf clover picked by little fingers and woven into a chain with other four-leaf clovers and worn on little wrists for an entire afternoon—finally, an aerial view of the world beyond the grassy forest—before being tossed in the yard with no ceremony or service. I am as lucky as the grounds at the bottom of your coffee cup who are spared the mouth, the throat, the esophagus and the digestive tract, and are left on the counter to pray for rebirth in the compost pile, before being washed down the drain. I am as lucky as the lightning bug who gets captured in a glass jar for a few terrifying hours but is let go after the kids are in bed, a sweet reprieve that becomes a violent death when the bully down the block catches you and rubs you on his shirt so he can be like you, luminescent, for a few seconds.

Several months ago, I smoked a cigarette on my balcony and tossed it close to but not into my ashtray and went inside to watch Rescue Me, a television show about the New York City Fire Department, which is full of drunks and heroes. I sat on my couch and watched Denis Leary fight fires and I stayed there for almost and entire episode, forty full minutes, and then received a nonsensical but charming text message from a beautiful girl. I got off my couch and took a beer from my fridge and walked to my balcony to compose a response in the clear air. When I opened the door, I saw a fire climbing the wall beside my unused ashtray.

While I am not calm most of the time, I calmly splashed the wall with beer and calmly went inside and calmly picked up the broken plastic cup I keep beside my bed and splashed water on the fire. I then decided that this was a story I should probably tell someone because there are very few things in my life I don’t want an audience for, so I called the beautiful girl and told her what was happening. Isn’t this crazy? I said. I wasn't scared because I’d seen Denis Leary fight real fires in and this was nothing, really.

As I was telling her this I saw that the beer and the water had extinguished the flames but not the embers burning in the wall. I said I’d call her back and grabbed the fire extinguisher, and thought about how I would have to clean the powder off the balcony later. But when the fire extinguisher was empty, the embers were still burning in the wall. I called 911 and told the dispatcher that I didn’t want to say my name because I didn’t want to get in trouble. I ran outside through my smoky house and thought about how my just-cleaned bedding would have to be washed again. When the firetrucks arrived, I noted that their boots were getting dirt on my floor and I’d have to clean that too. They dragged the hose upstairs and across my newly-vacuumed carpet and asked me what started the fire, to which I replied, spontaneous combustion. This did not make them laugh or even smile. After the fire was out, I told the fire chief that it couldn't have been a cigarette, that I don’t smoke because it’s disgusting, and, besides, even if I did, it’s a non-smoking building and I always follow the rules. A few minutes after that conversation, I walked into my bedroom and the fire chief was looking at a lighter on my bedside table and I thought, shit, I’m going to have to tell him that the light isn’t for smoking cigarettes on my balcony, it’s for smoking weed in my bedroom.

I kept thinking about how ironic it was that I was watching Rescue Me, and how I never would have gone outside if not for that text message and how I would have to remember to tell the beautiful girl who sent it that this was a sign, obviously, that she was fated to save my life and I was fated to love her for it. The whole thing was kind of funny. No one would be surprised to learn I had started a fire. I am the sort of person who makes these mistakes. I don't think about the consequences of ignoring my water bill or going to the beach instead of going to work and tossing a cigarette near an ashtray and going forgetting about it. The whole thing was so unsurprising that it was funny and would make for a good story tomorrow, and no one got hurt and the damage wasn’t that bad and the cat ran away but then it came back..

After the fire was out—planks missing from my balcony, siding and installation gone from my walls, everything covered in ash—and the firefighters were rolling up their hose and leaving, they shook my hand and congratulated me for not panicking, for using the fire extinguisher, for calling 911. It seemed ridiculous to shake my hand after I’d started a fire and hadn’t noticed it for almost an entire episode of "Rescue Me," and I said this, but, no, they said. If you hadn’t acted right then, the fire would have spread to the roof.

I tried to sleep but my sheets smelled like campfire. I thought about my neighbors, about the guy next door who lives with his sister and who told me that he has $1,000 dollars worth of miniature cars. I thought about the neighbors on the other side, who have a wicker pentagram on their front door, like a Christmas wreath for witches, and the neighbor downstairs who thinks my name is Kyle even though I have the same name as her dog. I thought about the dog and I thought about the neighbors a few units down who got engaged last week and have this whole new part of their lives happening. Three more minutes and the fire would have slid across the roof and taken the hot wheels and the wedding invitations and maybe even the dog with the same name as me. With three more minutes and a little less luck, we would all be people who lost things in a fire. The coffee grounds wouldn't get a second life in a pile of compost. I would be the one who let one lit cigarette, one thoughtless action, become not funny but final.