Came in First at Belmont

The Bronx's own Little Italy with its panoply of small shops and intimate restaurants. 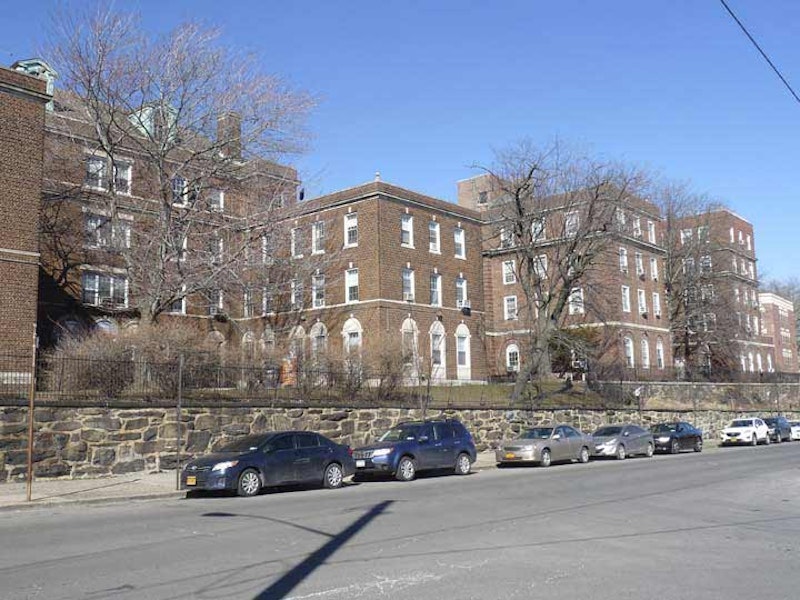 Belmont in the Bronx, south of Fordham University and west of the Bronx Zoo, is famous for its own Little Italy centered along Arthur Ave., with its panoply of small mom and pop shops, and small, intimate restaurants. I’ve never partaken of the comestibles found here, since I’m always on my own and don’t prefer to eat alone in proper restaurants. Here’s the back edge of St. Barnabas Hospital (and the older buildings in the complex) at Quarry Rd. and Oaktree Pl. The land for the institution was donated by the Lorillard family, of tobacco fame, who had large Bronx holdings in the 1800s. St. Barnabas Hospital was founded in 1866 as “The Home for the Incurables” by the Reverend Washington Rodman, rector of Grace Episcopal Church, in the West Farms area of what’s now the Bronx. He called together a group of public-spirited citizens to explore how to provide a haven for so-called incurables who couldn’t be cared for in existing hospitals. Reverend Rodman’s goal was to bring hope and medical care to a group that had neither. 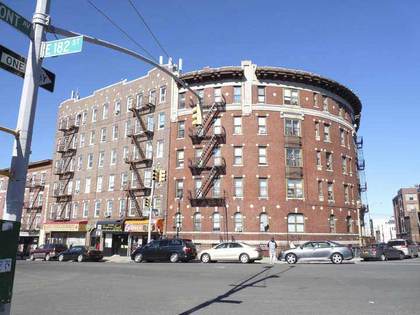 One of the great hallmarks of Bronx architecture—and to me, one of the great mysteries—is the curved frontage of Bronx apartment buildings at intersections. On E. 182nd, we have two a block apart, on Hughes Ave. and Belmont Ave.. These curved-front buildings may all have had the same developer, though I doubt it; there must be over 100 of them scatted around the western Bronx, and they make impressive sights. (The one on Hughes Ave. looks like it was halved by a pizza cutter.) Why does the Bronx have them, and no other borough? One answer may be the Bronx’s topography; although planners tried to lay out a grid system, frequent hills and streams prevented it, and hence, intersections rarely are on 90-degree angles as they are in Manhattan. 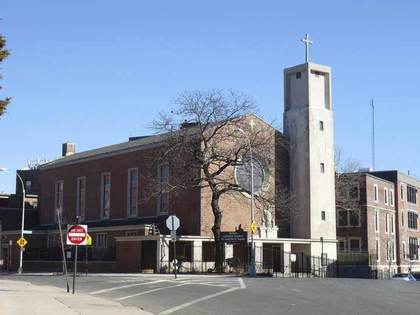 St. Martin of Tours Church, Grote Street and E. 182nd. The present church building was completed in 1952; the parish was established in 1897 and a nearby apartment building bears its name. The church was forced to close its elementary school in 2011. Schools like St. Martin’s were community bulwarks throughout the rough years of the 1960s-1980s, when the southern Bronx was a drug gang war zone. The name of the street doesn’t honor former Mets All-Star catcher Jerry Grote, who pronounced his name to rhyme with Brody. Rather, it was named for musician and member of the Bronx Board of Trustees Frederick Grote, who rhymed his name with boat. 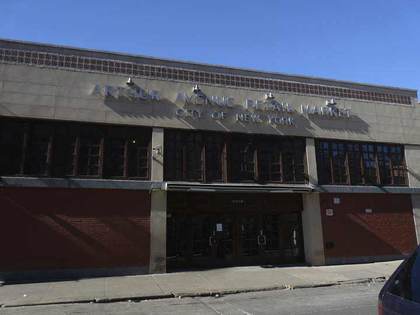 I didn’t head up where the action is in these parts, Arthur Ave., named for President Chester Alan Arthur, on this particular walk: instead I made my way north on Hughes, a block east. Catherine Lorillard Wolfe, of the tobacco family who owned property in the area, were admirers of Arthur and also donated a statue of him that stands in Madison Square Park; Arthur took the Oath of Office on nearby Lexington Ave. after the assassination of President James Garfield.

This is the rear end of the Arthur Avenue Retail Market, opened in 1940 along with a group of others (such as the Essex Street and 13th Avenue Markets in Manhattan and Brooklyn) as an initiative by Mayor Fiorello LaGuardia to rid the streets of pushcart vendors, which he considered to be a scourge. Most of the indoor markets, which feature the utilitarian exterior design taking hold in the 1930s and 1940s, are still open today, and as Arthur Ave. became a food mecca, the Arthur Avenue Retail Market increased in popularity. The market consists of nine restaurants, five pastry shops, four butchers, two pasta-makers, six bread stores, three pork stores, five delicatessens, two fish markets, three coffee shops and one Italian wine shop. 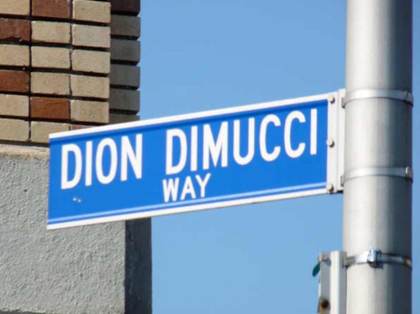 Belmont Ave. and E. 188th is named Dion DiMucci Way for one of the most popular music acts of the late-1950s and early-60s, who with his group, the Belmonts, got their start singing on street corners in their neighborhood. After signing with the Laurie record label, between 1958 and 1968 he rang up a dozen Top 20s, with and without the Belmonts, among them “Teenager In Love,” “I Wonder Why,” and “Abraham, Martin and John.” Dion still tours and records. 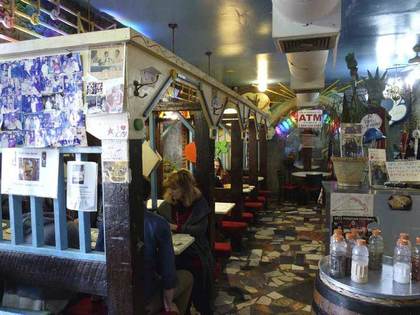 Located on E. 191st between Hoffman St. and Hughes Ave., tucked off the south side of the street with a large front yard/driveway, facing the Fordham campus, it’s easy to miss if you don’t go to Fordham because it’s off the main drag, Fordham Rd. Walk inside and it’s a pizzeria like no other. It appears to be a Fordham dorm room with kitchen tables, some soft chairs, and somewhat secluded booths with more traditional wood seats and Formica tables. There are hundreds, perhaps over a thousand, photos of Pugsley’s staff and patrons, along with other detritus and memorabilia; this seems to be the pizzeria version of the old Waterfront Crabhouse in Queens, which had been owned by a boxing promoter and had thousands of boxing memorabilia and NYC artifacts arranged in the space.

Pugsley’s was founded by Sicilian immigrant Salvatore Natale in the early-1980s, a former jazz saxophone who had arrived in the States in 1967. It was originally located on Pugsley Ave. in Castle Hill (and thus has nothing to do with the striped-shirted Addams Family kid played by the late Ken Weatherwax on the TV show). In 1985, Natale purchased what had been a junkyard on E. 191st and opened the current shop there.