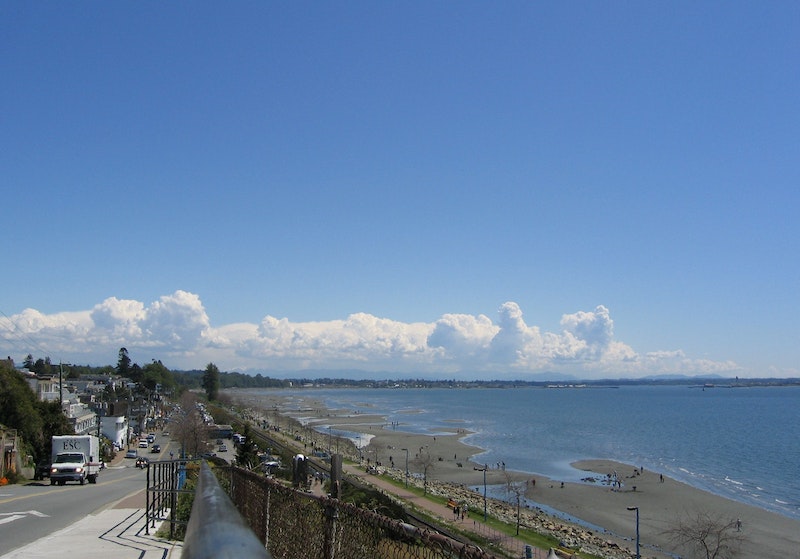 “Do you have a firearm or something in the vehicle?” the police officer asked when he pulled me over Monday in Blaine, Washington. He asked because I was moving very slowly and deliberately in my ancient Subaru sedan to cough up a license, registration, and proof of insurance. Cops don’t usually appreciate sudden movements when they’ve got you stopped, but it’s possible to overdo it. Good to know. “No, sir, I just don’t want to make you nervous,” I said, to the man who did have a firearm.

It was a successful icebreaker. “I’m not nervous,” he said, and I caught him half-smiling. Probably not at me but my co-pilot. It was a bone cold day. My dog Siska was along for the ride. She’s a small, old, half-Yorkie, half-Dachshund who was going to have to sit in a chilly car during the doctor’s office visit. The only thing available to bundle her up in had been a light pink doggie hoodie with a fleur-de-lis on the back, made of reflective silver bling. It looked cute, and absurd. The marked contrast between this small, well-groomed fashion forward dog and her large, unkempt owner may have tickled his funny bone.

“I pulled you over because your tabs expired in October. Did you know your tabs were expired?” he asked. The weasel in me had some suggestions here, but a much more exasperated voice said, “Take your lumps, dumbass.” So the truth won out: “Yeah, I knew about it. I was going to renew them.” You know, eventually. Proof of insurance and registration were in the glove compartment. My wife had handed me the insurance card wrapped in a Ziploc bag. The officer remarked idly that he keeps his own documents that way as well, just in case, as he was heading back to his car to make sure I wasn’t wanted for anything before he dealt some infrastructure-funding justice.

He didn’t dither. In two minutes, the cop returned to give the ID and documents back, but no ticket. “I’ve got your license and license plate,” he warned. “And I’m going to look them up in the system. If you get this taken care of by Wednesday, it’s water under the bridge.” I assured him it would get taken care of, just as soon as I finished up at the doctor’s office. And it was. I drove home for the paperwork, then to a nearby supermarket that has a Vehicle Licensing Department extension, and paid the piper.

We used to live in Blaine, so the officer’s courtesy and kindness didn’t surprise me. One of the things I appreciated about the town was the police, and my back-door neighbor Shane agreed. Blaine is a town of 5000-plus people right on the Canadian border. It has a competent, small police force. Blaine PD had a bad spell recently where the city council hired a new chief from the FBI who was slightly unhinged. But both before and after that, it was like Mayberry PD with all Andys, no Barneys.

Which isn’t to say that Blaine is Mayberry. The police blotter in the local newspaper, The Northern Light, was a mix of the locals acting like goofballs, drunks, or occasionally violent psychopaths. The message that the police tried to send to the town via that blotter was this: We are peacekeepers. We don’t want to ticket, arrest, or trespass any of you if we don’t have to. Let’s all be reasonable and we’ll try to work something out.

My wife and I saw this lived out when we lived along the main drag of Blaine in an upstairs condo unit. A guest from our troubled downstairs neighbors hit-and-runned her car. A Blaine police officer came to talk with the lady-of-the-house downstairs about a completely unrelated matter. We approached him about what had gone down the night before. This scared the guest into showing up on the scene and confessing what he had done.

Rather than cuff the guy, the officer took down his info and played the good cop. If the young man didn’t make us whole on the $800 repair bill, he faced months in jail and a whopping fine. Who wanted that? That time, we got our money, care of Blaine’s Finest’s arm-twisting. Peace was kept and justice served. I have to admit that made it a little easier to swallow handing over $68 for those tabs.