Monica on her year in Vienna with Rooster, 1980—their very own Great Leap Forward. 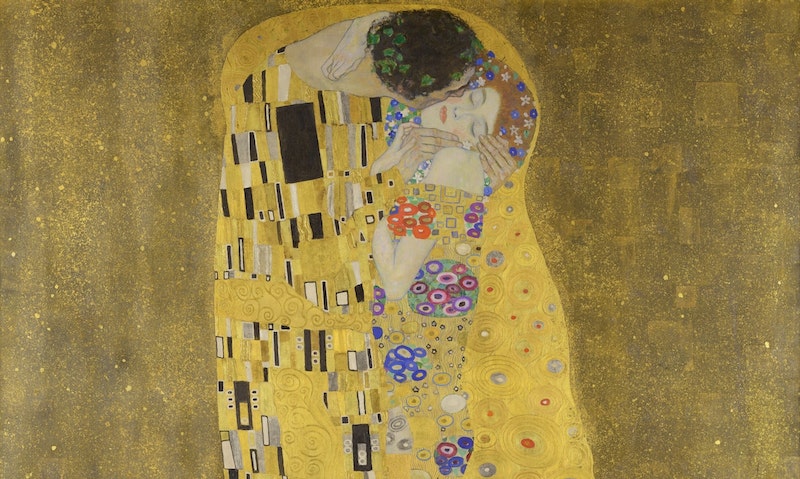 Somewhere in Vienna I remember arguing with Rooster about Klimt. We were in a gallery and the sun was setting—no one was talking, it was all very cordial and cold—and I sidled up to Rooster, admiring “The Kiss.” I leaned over and whispered in his ear that he was probably asking that chick if he could chuck it in her dumper. Get it? They’re European. He didn’t say anything, didn’t even turn to look at me for five seconds, and then all I got was this: “Have some respect for a great artist, Monica. Not everyone can spend their husband’s money on scarves and sashes and go out at night all whored up, like you.”

I didn’t kill him. I didn’t spur claw him. I didn’t even scoff or react at all. This was 1979, maybe even 1980. It was a strange time in our relationship: Rooster had been strung out with Iggy in Detroit and got clean with him and Bowie in Berlin. By the time they were back in America, Rooster was pursuing a PhD in Philosophy at a local trade school fair to our kind. Vienna was open foreigners, but the specter of fascism wasn’t exactly invisible. I was followed home multiple times by “police” wearing rubber shoes and carrying jet black batons and singing songs that were just a little too Teutonic for me.

My flight to Vienna from New York was miserable…sure, you could still smoke, but I couldn’t bring any of my pot along. It would’ve been relatively easy to smuggle in a small amount, but who can get by in a foreign country on just a couple of grams? Even an ounce I might’ve been able to manage, but shortly before I left Paul McCartney was arrested for trying to bring a pound into Japan, and it really looked like he was going to get eight years hard labor for a while there. I didn’t even bother bringing my Valium on the trip—big mistake. This butt ugly lawyer with a combover sits next to me and starts issuing gas and leaking semi-solid feces from not just his anus but his mouth, his ears, his eyes… this was pre-AIDS, but terrifying nonetheless. He was escorted off the plane shortly after landing, but not before we, as a plane, quarantined him in the back. I’m not sure he ever got out of that bathroom actually, I remember there was something about our flight in the local paper a few days after I arrived, but it wasn’t in English.

Send a chicken to Austria for three months and all of a sudden he thinks he’s Sigmund Freud. Rooster even shaved his top-feathers and took to wearing round granny glasses in honor of the late doctor. As always, his sartorial efforts failed—people thought he was trying to look like John Lennon. Someone even mistook Rooster for Lennon one night—keep in mind, this is the spring of 1980, Lennon had been a recluse for five years and hadn’t even begun writing what would become Double Fantasy (his best album)—and it upset Rooster very much. “I’m not a pop musician,” he moaned. “I want to be taken seriously.” He pouted like a stuck Marlon Brando. Despite the wack glasses and questionable haircut, he was still my husband. He was still the bird I fell in love with. “You should write novels,” I told him. “And then, people will take you seriously.”

I always enjoyed his writing more than anything else he did. You have to remember, before Rooster was a writer, he flitted from hobby to day job to gig to precarious coal mining supervising jobs like a grasshopper. But he was never a Chinese Chicken. I like to think my encouragement that night in Vienna—only 11 words—helped him back up. The 1980s were very good to us, as soon as we left Austria of course. Rooster started with short stories and eventually the crimes series he was commissioned to ghostwrite, but it was in Vienna when he realized it was in novels how he would be remembered.

Why the nasty anecdote at the beginning? Well, it actually happened. I can’t explain it other than the moodiness produced by summer humidity, a homesickness coming close to chronic pain as our return home loomed, and perhaps an innate male jealousy. Because he really did take my advice to heart: after that night, he did almost nothing but read and write, day and night. I would bring him food, water, tobacco, even hash—and he was usually too tired to be cranky what little I saw of him during his period of great productivity (he still refers to Vienna 1980 as his “Great Leap Forward”). I was just there as a tourist, not some anguished artist. So I’d go out, maybe have a fling or two, and I’d drink and smoke a lot, but whatever—I loved my husband, and this was my free time. I’m sure he picked up on this but he never talked about it. He’d smell the gin and tobacco and cologne on my collar and hit the sack without saying a word. That afternoon in the gallery with Klimt’s “Kiss” was the only time he ever brought it up. I was stunned at first, but then I understood: we were leaving in three days. His exile was over, and the make-up sex was incredible.