All Men Are Pigs

Nothing like a juicy sex scandal to lighten our daily burdens. 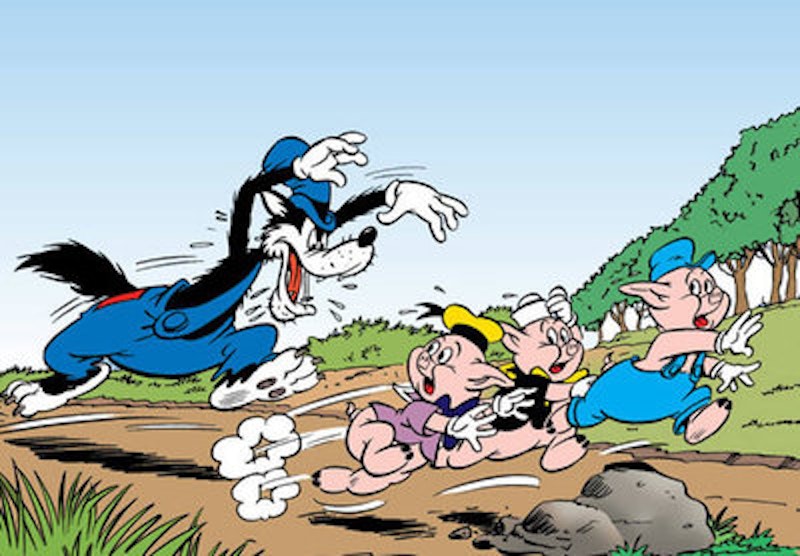 It was always the good guys vs. the bad guys. It was fairly obvious who was who. Today’s saints and villains are not so clear-cut. Wolves in sheep's clothing is an accurate depiction. That vintage cartoon of a wolf whistling a two-note catcall hoot of hubba hubba as pretty ladies stroll by. But modern men are not cartoon wolves, just as today’s women are not little red riding hoods. Men have groped women, children, and other men, having their way with others through the ages unchallenged and unscathed. The big dumb caveman bonking his mate in the head with his club, dragging them unconscious by their hair back to the cave.

Disgraced Baltimore Ravens football star Ray Rice is a good example. Caught on surveillance camera in an Atlantic City casino elevator punching out his then-fiancée, now-wife, dragging her by her hair down the hallway to their hotel room. A touchy-feely sort of mushy cuddle, bear hug, punch, kick, bonk, squeeze, and a sloppy tongue kiss to seal the deal of an opposite partner, gender attraction unspecified.

Not long ago anonymous sex was the norm. Folks frequented local bars and other nightlife establishments, hot to trot, hooking up for casual sex. Many times a first name and a good vibe from a mutual partner was all that was needed to head home and spend the night together in the steamy embrace of the beast with two backs. Other times you didn’t even know their name. This practice all but vanished with the advent of AIDS. Before AIDS the playing field was equal for all sexual orientations and predilections. Almost overnight, casual sex came with a risky death sentence.

There’s the stereotypical Stanley Kowalski dimwitted alpha male character portrayed by Marlon Brando in the film A Streetcar Named Desire. The ignorant slob without scruples, beer in hand, cigar firmly clenched between dirty teeth, foul breath, sweating, belching, and farting in his filthy white wife-beater tank top. Not exactly a picture of romance. They like to slap their women around and rape their wife’s sisters, or worse, their own children. This type of male is legion. Something to do with an obscure Napoleonic code. The sexual predator uses extreme force and dogged determination to subdue its prey. The elephant rifle or the open hand back slap, a closed fist knuckle sandwich, a baseball bat or a golf club seems to be the standard weapons for abusers. Besides guns and knives. Also the dropkick, choke hold bitch slap to dominate a victim.

The now infamous movie scene of James Cagney in The Public Enemy smashing a grapefruit half into his girlfriend’s face during breakfast is a prime example of something sinister that still prevails. Powerful men believe it’s okay to abuse women, other men or children. Offenders of the worst kind are rich and powerful but it happens in every class without distinction. Molesters come in all shapes, sizes, and colors. Raped in a prison by a giant named Tiny. Molested by a priest in the rectory over a bottle of sacramental wine. Abused by a cop in the back of a squad car. Fondled in the coat room in grade school by a beloved teacher. Groped by the coach in the locker room. Conquering armies rape, pillage, and murder because they can.

The Hollywood casting couch is exposed in news media outlets. Every day a new sordid story is revealed. But this has been going on behind closed sets and movie moguls locked office doors since celluloid film’s debut. The sexcapades of the stars and starlets legendary appetite for fame and how far one is willing to go to achieve it is obvious. The young girl from some farm town in the heartland travels to the big city, gets discovered in a drug store soda fountain and becomes a Hollywood super star. It’s so innocent, like a modern day fairy tale.

What’s left of the newsstands and magazine kiosks display full color covers of the once powerful, downfallen outcasts who were caught with their hands in someone else’s pants. We love it. Some rich, old, fat, hideous perv gets caught in the act and we eat it up. Nothing like a juicy sex scandal to lighten our daily burdens. It makes our problems less heavy watching the mighty fall.

Everyone has a pussy hat. We have all said “me too” and “no means no” yet we’re still confused about our roles as men and women in the movie of our lives. I’ve heard stories from friends who, when young, were abused by pedophiles. I was molested by a babysitter. Many were stalked by deviants who exposed themselves in public. People who were attacked, manhandled, beaten and murdered by “friends” because they said, “no” to sexual advances. People who were abused by doctors, lawyers, teachers, relatives, siblings, priests, politicians, and parents. Those who hold power and authority over the weak, naive and innocent. The reasons why they never tell anyone are too numerous. Guilt, embarrassment, shame, ridicule, religious beliefs, and fear of retaliation from abusers. We’re victims of our own desires and patsies and dupes for the twisted desires of others.

We can all be pigs, rats, dogs, snakes, worms, and creepy crawly bugs in the common garden variety of barnyard critters. The monsters are real. We idolize them. We love them. We believe in them. We watch and follow. Some even vote for them too. They’re everywhere.